You're All Surrounded, Epsiodes 1-4: Off to a great start 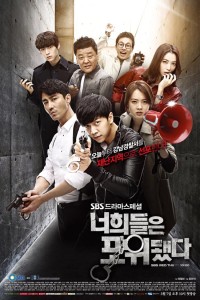 Entertaining, heartwarming and hilarious, You’re All Surrounded is off to a great start! Not only is the writing and directing strong, but the actors also manage to bring depth to their characters, resulting in a quality drama. You’re All Surrounded focuses on a detective team in Gangnam consisting of four rookies and their hard-to-please team leader and you can bet that hijinks ensue.

The rookie team consists of Eun Dae-Gu (Lee Seung-gi), Eo Soo-Sun (Go Ara), Park Tae-il (Ahn Jae-hyun), and Ji Gook (Park Jung-min) who all have less than stellar reasons as to why they became a detective. Ji Gook just wants to live in Gangnam, Tae-il thought being a detective would be fun, and Soo-sun is only interested in the high salary.

Only Dae-gu refrains from answering the question and the drama expertly navigates his back story, explaining to the viewer why. As a young boy, Dae-gu struggled with being the son of a single mother. His mother, set to testify as the key witness in a murder trial, was murdered before his eyes.

As if that wasn’t enough, it seemed as though his mother’s murder was due to the corruption of the lead detective at the time, Seo Pan-seok (Cha Seung-won). Motivated by revenge and justice, Dae-gu became a detective in hopes of rooting out Pan-seok’s corruption. 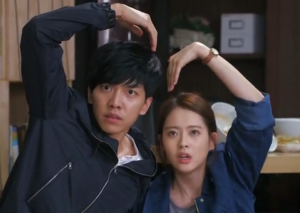 There’s plenty of fun and laugh-out-loud moments as well. The first episode exploring the back story and tie between Soo-sun and Dae-gu was absolutely hilarious. Child actress Ji-woo cracked me up as the younger Soo-sun with her gangster persona and constant streams of cursing.

Thankfully, You’re All Surrounded keeps the comedy going in the present with the rookie team ridiculously botching up their assignments while still being somewhat helpful. The growing friendship between the four is entertaining to watch especially as they finally band together in episode four.

Although Ji Gook serves as a source of humor much of the time, there are hints of complexity for his partner Tae-il. The drama hints at Tae-il being gay or at least bisexual as he seems to romance women. You’re All Surrounded treats this aspect of Tae-il respectfully. Although it is used at times for humor, the drama hints at Tae-il’s struggle with this aspect of himself and it will be interesting to see how it is addressed in later episodes.

Chief investigator Pan-seok is another mystery as the viewer is unsure of whether he was (or still is) a corrupt cop or not. At first, it seems to be some sort of misunderstanding but the cliffhanger of episode four suggests differently. 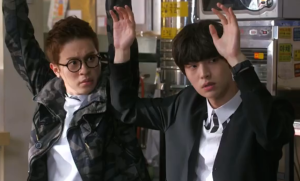 The drama also doesn’t explain why he hates the rookie team so much though they finally earn his begrudging respect. Lastly of mystery about Pan-seok is his relationship with missing persons team leader Kim Sa-kyung (Oh Yoon-ah). The two were once married but the reason for their divorce remains a secret.

Along with Sa-kyung, Kang Seok-soon (Seo Yi-sook) is another high ranking woman in the police unit. Chief Kang runs the precinct and seems to be a mentor to Pan-Seok. She appears to be involved in some sort of political battle regarding the institution of the rookies in the precinct although not much else is known regarding this battle. Both actresses do a great job of portraying their characters as strong women who manage themselves in a precinct full of men.

Up until now, You’re All Surrounded has done a wonderful job of setting up the plot while being entertaining and having interesting characters. The rookies coming together and finally earning respect from Pan-seok was a well-earned scene that didn’t fail to bring the comedy as they rushed to take back Soo-sun’s resignation letter.

I doubt that Pan-seok is corrupt but the drama seems to be setting him up as such. Dae-gu’s confrontation of him will be popcorn-worthy if their fight in the interrogation room is any indicator. Ultimately, You’re All Surrounded, weaves together a drama of comedy, friendship, and mystery that is sure to be a success if things continue.

Favorite character? What do you think of the mystery of Pan-seok’s corruption?