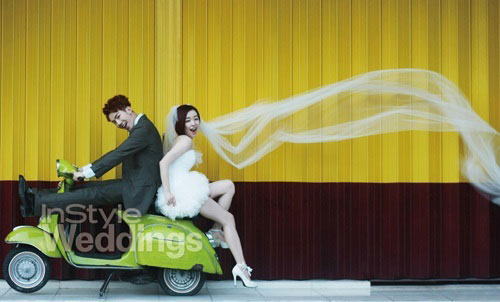 of their virtual marriage on We Got Married on Shindong and Gyuri‘s radio show Shim Shim Tapa today. Jo Kwon and Ga-in first appeared on the show on the October 3, 2009 Chuseok special and have been filming ever since for a total of 17 months.  They were the couple that had the longest run on the show and they really were the ones that saved the show going into its second season when it was on the verge of cancellation.

The endearingly named “Adam” couple, named so because of their diminutive stature, were larger than life on the show for fans due to their hilarious interactions and constant bickering.  Their relationship has become very close with some believing that the two are actually dating.  The PD of the show has stated that during the filming of the last episode both Ga-in and Jo Kwon shed many tears.

News of their departure of the show has been spreading like wildfire since being announced on Shim Shim Tapa.  Viewers of the radio show had been tweeting the news to spread the word.  Many believe that the couple are leaving due to their upcoming busy schedules with the Brown Eyed Girls’ new album coming out and their entrance into the Japanese market and Jo Kwon being busy with his various appearances and 2AM‘s new-found popularity.

I know I’ll miss seeing the couple on We Got Married, they were one of my faves.  Best wishes to a bright future for both Jo Kwon and Ga-in.