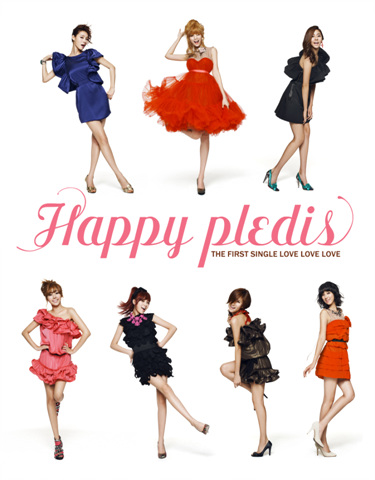 Happy Pledis is here. After School (minus Bekah who is rumored to be chiilin’ in the 808 with her family for a much deserved vacation) have released their mini album Happy Pledis, which has 4 songs.  Well actually, there are two songs ‘LOVE LOVE LOVE” and “Someone is You” and the instrumentals of both.  Pledis Entertainment has announced that a portion of the procceds from the mini album sales will go to the Save the Children charity.

“LOVE LOVE LOVE’  is a cute song, the feel of the song reminds me a bit of Mariah Carey‘s “All I Want For Christmas Is You.” After School has also released a short teaser for the song’s MV, check it out.

Looks like the concept of the video is a Christmas based love story?  We’ll have to wait for the whole MV to find out.  All I know is that I’m thankful that they’re not dressed up in any kind of Orange Caramel kind of get-up (I was dreading some sexy Santa’s elves wear).