The BEGs were Sexually Harassed on Nippon TV? 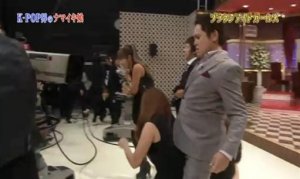 That’s what Netizens are saying after seeing the November 15th broadcast of しゃべくり007 (Shabekuri to 007).  The Brown Eyed Girls were guests of the popular Japanese variety show and showed the cast of seven men their ‘sexy’ dance from the song “Abracadabra.”  The hosts then tried their spin on the dance and that’s when the trouble started, check out the video at about 4:40.

The host that got carried away was comedian Arita Akira and he was literally on top of Jea swaying his hips around and chasing her for a bit.  I’m not sure how big a deal it was because BEG did go on with the rest of the show and seemed fine.  I can understand the netizens’ complaints though because although I think the host meant it as a joke, it was in poor taste.  While some have claimed that this whole issue is a case of cultural misunderstanding, others claim that this controversy will continue to receive strong criticisms from conservative Korean fans especially with so many of Korea’s top girl groups making forays into the Japanese market.

“While You’re Sleeping,” JeA takes on the Band MV