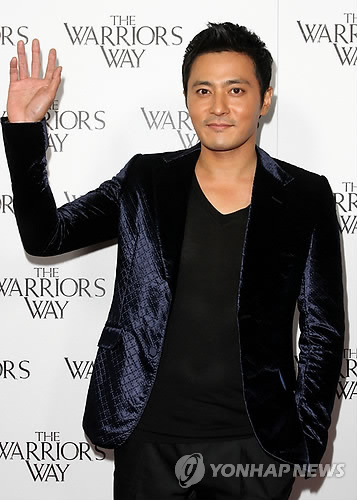 Jang Dong-gun hit the red carpet with the cast and crew of the movie The Warrior’s Way for its LA premiere at Koreatown’s CGV Theaters.  The film marks the Hollywood debut for Jang, even though he is one of the most highly admired actors in Korea.  Check out this interview with Kate Bosworth, Jang Dong-gun, and the film’s rookie writer/director Sngmoo Lee (it’s not a typo that’s how his name is spelled on the official site).

Brian Joo was also in LA for the premiere.

Ninjas vs. Cowboys?  Yee-haww…  The movie will be released on December 3rd, if it’s as good as the trailer I’m thinking Jang Dong-gun will be opening up the world more for Korean actors.  More behind the scenes goodies of the film can be found at the film’s official website and it’s company’s YouTube channel.