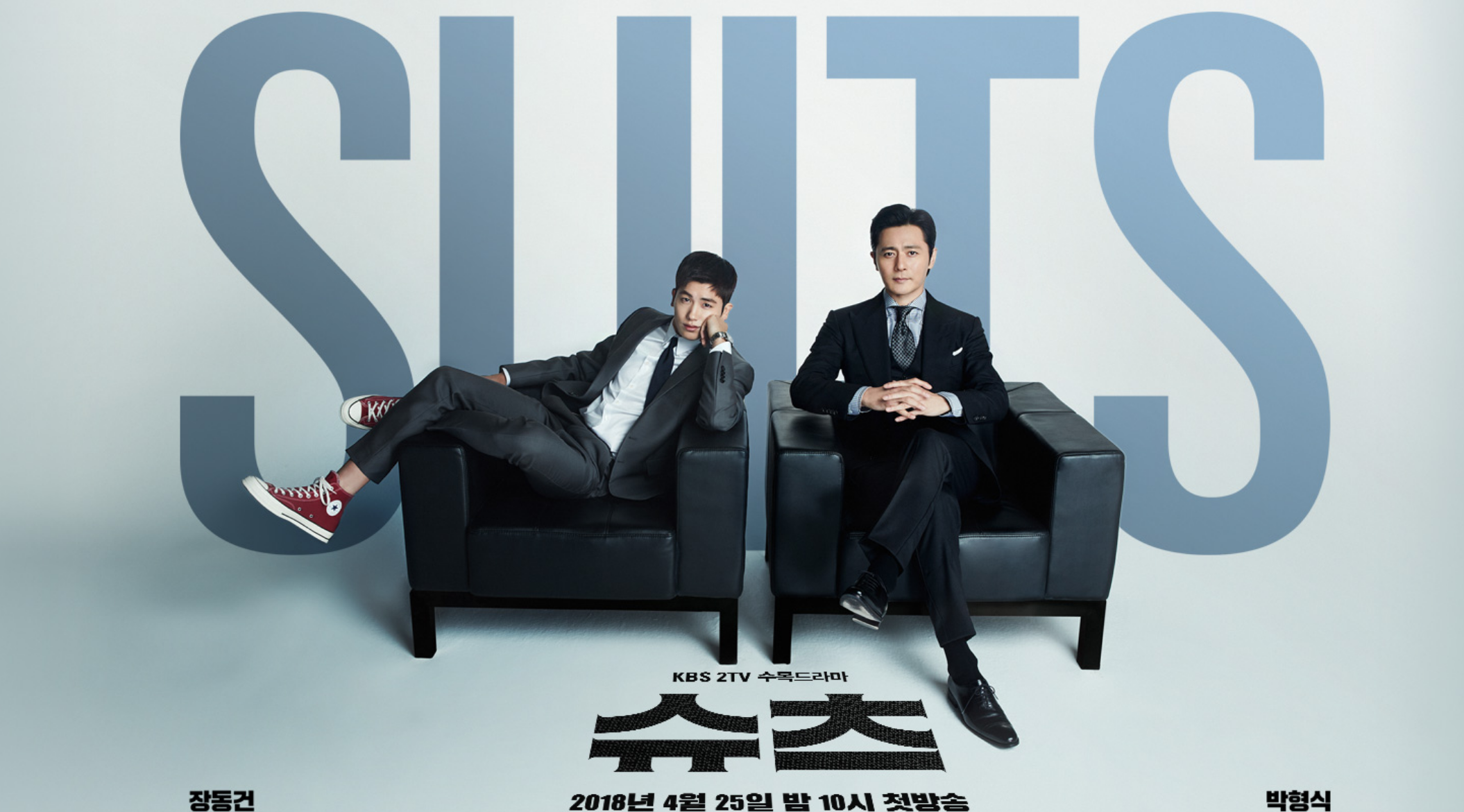 If you’re looking for a legal drama with a focus on two talented, witty lawyers, then Suits is for you. Expectations for Suits were high, and the drama started off strong during its pilot week, premiering in first place. The drama continues to bring in a large viewership every week, with viewership ratings hitting a high of 9.7% and not going lower than 7.4%.

Unlike some legal dramas, Suits is fast-paced, with it’s fair share of witty dialogue, exciting characters, and timely plot twists. Even though the Korean adaptation is very closely based off the American TV Series of the same name, it manages to set itself apart as a drama and brings in elements that makes it feel authentically Korean. After Saturday Night Live Korea and Moon Lovers: Scarlet Heart Ryeo, this is the third series that has been co-produced by NBCUniversal. 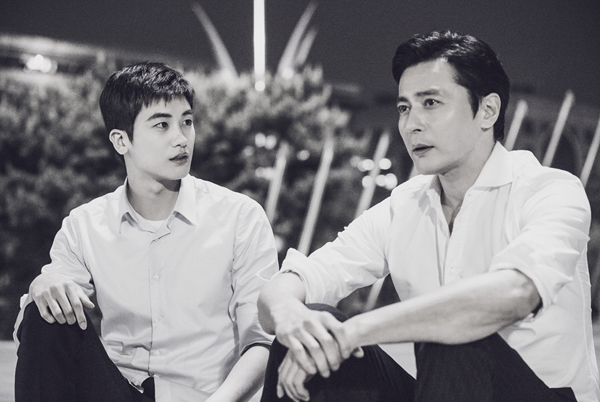 If you’ve never watched Suits (US), then the plot is a winner. The drama centers around Geo Yeon-woo (Park Hyungsik), a smart college dropout with a photographic memory who ends up working as a law associate at a top law firm, known as Kang and Ham. His boss, Choi Kang-seok (Jang Dong-gun), who is the best closer in the city, hires him despite his lack of qualifications, and together they overcome various legal issues and problems. Sounds familiar? Suits follows extremely closely to the American version, so don’t expect too much variation if you’re watching both versions.

One of the most appealing things about the drama is the development of their characters. Sure, there are your protagonists and antagonists, but Suits is careful to show that every “good” character has some inherent bad in them, and that every “bad” character has some inherent good in them. Just because one treats you well is not equivalent to them being a great person: just as one’s inadequate treatment of you does not mean that they’re a terrible person. The drama is competent in showing that our judgements of people are biased. Flat characters are frustrating to watch, and it’s commendable that Suits makes an effort to portray all their characters with as much dimensions as possible. 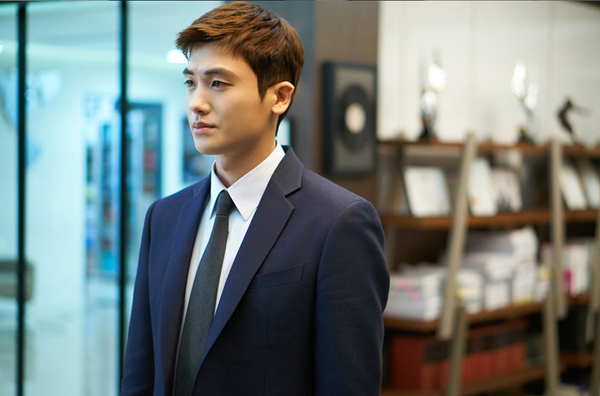 Take Yeon-woo as an example. He’s one of the main characters, which pretty much means that he should be perfect in as many ways possible. However, Suits is careful to show that circumstances are consequences of our own decisions. Although Yeon-woo is just a young (orphaned) adult trying his best to support his grandmother, he’s also shown to have cheated in exams and having to leave his college because of his own mistakes. He’s later shown to deliver drugs (to his credit, he hates it, but needs the money), which eventually leads him to a police trap. Though he does manage to get away (and ends up using the Kang and Ham’s Associates Interview as a cover to hide, which is where he gets his job), he directly disobeys Kang-seok’s orders to get rid of the drugs he was carrying — this causes a problem later on. He’s also very emotional and somewhat impulsive, which jeopardises a few cases that he works on.

On the other hand, the show humbles him by showing his earnest side that is willing to change their ways, learn and grow. Not only the protagonists, but the antagonists are given just as much attention. Chae Geun-sik (Choi Kwi-hwa), who is Kang-seok’s colleague and rival, seems to dislike Yeon-woo with a passion, and is always finding ways to undermine him so that he can bring down his rival. Yet, he is shown to be strict with Yeon-woo only because he worries about his lack of background in law, and his lack of professionalism that a law graduate would have. Although he seems mean to Yeon-woo, it’s shown to be out of his intent to keep only the best associates in his firm. 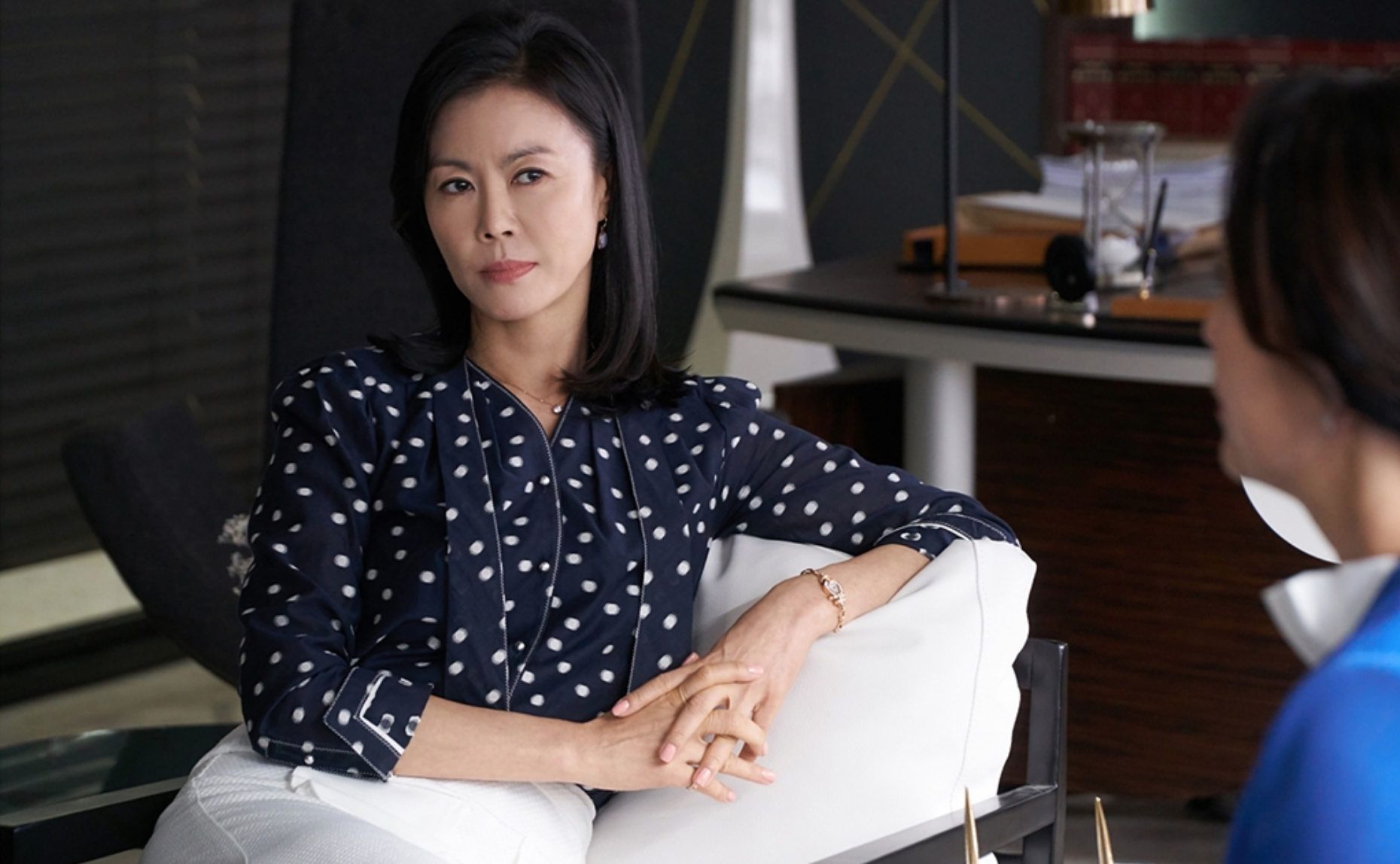 What’s also remarkable about Suits is the incredible amount of women shown in power, and as superiors in various firms. Kang Ha-yeon (Jin Hee-kyung) puts the “Kang” in Kang and Ham, and refuses to take any foolishness from anyone. Though she has a soft spot for Kang-seok, she is not afraid to set him straight whenever he tries to go against her vision. Similarly, the firm’s paralegal, Kim Ji-na (Ko Sung-hee) refuses to be treated as someone less important just because she isn’t a lawyer. She’s quick to establish her authority with Yeon-woo when he enters the firm. Many of Kang and Ham’s clients also tend to have quick-witted, firm women as CEOs.

Of course, no Korean drama is complete without its romance. While there is a budding romance between Ji-na and Yeon-woo, the larger focus falls on the bromance between Yeon-woo and Kang-seok. It’s fun to see Yeon-woo subtle reactions and witty remarks to Kang-seok, who is this very-cool, very-talented, super-serious lawyer with a surprising, hidden sense of humour.  It’s also entertaining to see how Kang-seok likes to pull Yeon-woo’s leg, but simultaneously teaches him how to be a good lawyer by allowing him to make mistakes (and then scolding him). It’s undeniably amusing to see Yeon-woo attempting to fist-bump with Kang-seok multiple times, only to be turned down each time. Each time, it makes you go, “come on Kang-seok, satisfy the poor fella, he just wants that fist-bump,” only for it to be never carried out. 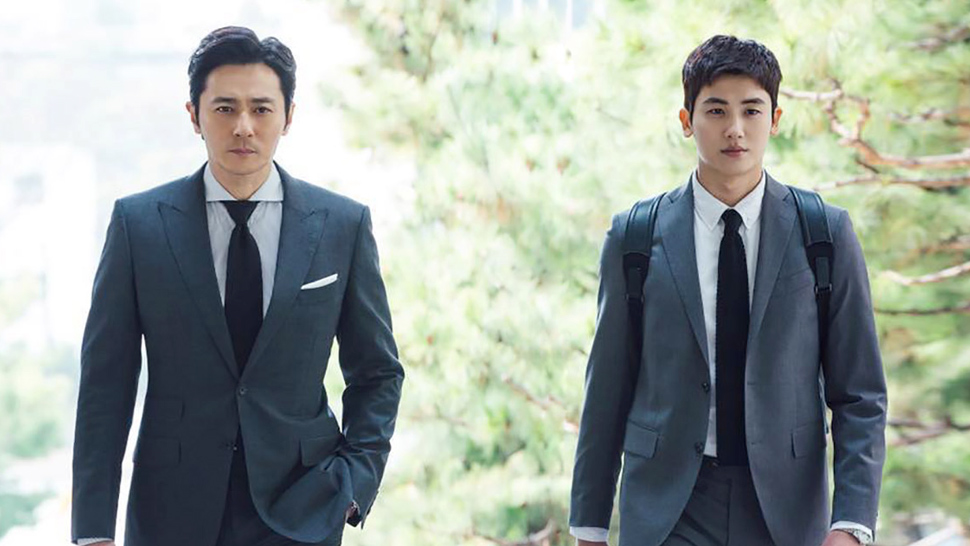 The plot develops wonderfully to showcase the pair of characters individually and together. Though there are bigger cases which require Yeon-woo and Kang-seok to work together, they are individually given smaller cases to work on their own. Kang-seok assigning cases to Yeon-woo, despite his mistakes, shows the amount of trust he has in Yeon-woo. Kang-seok’s intellect, experience and focus on loyalty really shine as he deals with personal cases. In one episode, he’s required to expose the wrongdoings of an ex-mentor, who throws him under the bus to save himself. Kang-seok tries his best to divert blame from himself without going on the stand about his ex-mentor. That’s because despite his wrongdoings, Kang-seok respects his mentor and asks him to confess instead, and refuses to go against his virtue of loyalty till the end. Afterwards, he’s only saved because of his secretary. Dong-guk’s portrayal of this straight-faced, but cheeky, lawyer is close to perfect.

Hyungsik’s acting of Yeon-woo is especially impressive as well. Hyungsik has always chosen roles that fit him well, but Yeon-woo pushes him out of his comfort zone. Maybe I’m biased, but he seems like an actor that’s able to handle complex roles and a variety of genres. Yeon-woo has a complicated and difficult past; Hyungsik does well in bringing across a standoffish and stiff Yeon-woo. Yeon-woo’s genius had probably led him to be outcasted when he was younger, and Hyungsik’s potrayal of Yeon-woo brings across the character’s cautious, genius, understated and awkward personality to life. It’s also brilliant to see how his character develops into a more confident and humorous character now that he’s found an avenue where his smarts are appreciated and sought after. 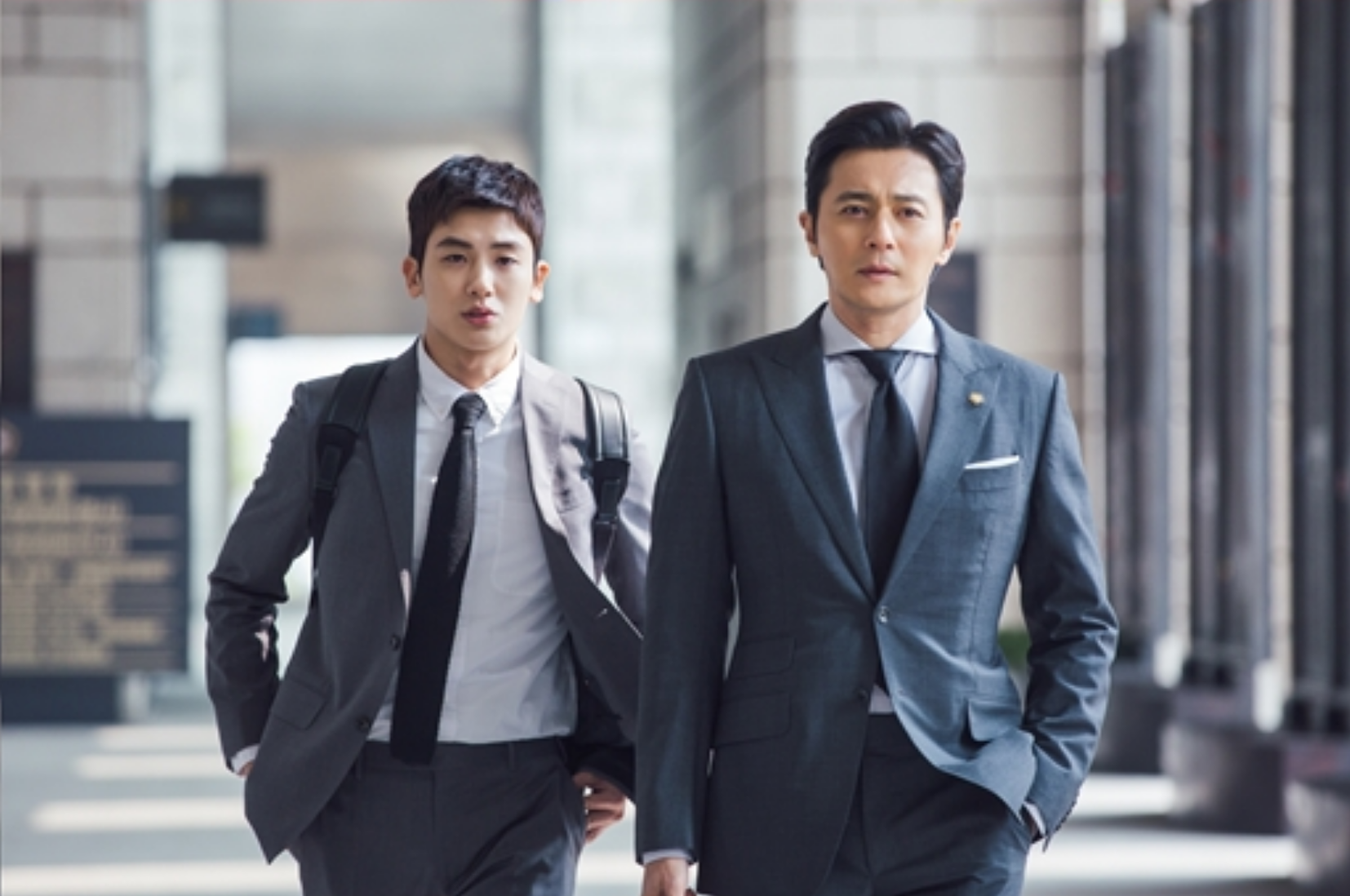 While the plot hints at heavier, and more intricate storylines in the second half, the first eight episodes have shown how Yeon-woo has been settling into this new world of his, how Kang-seok makes discoveries about himself as a lawyer, and how these two characters help in bettering the other; there are some flashfoward scenes which show Yeon-woo in jail and Kang-seok being there as his lawyer. However, the drama has yet to explain if Yeon-woo does indeed get caught for practicing law illegally, or if there will be some other plot twist involved.

I’d have to say that a large reason for Suits’ success is not only the engaging plot, but also the well-casted actors who do a great job in depicting their characters and interpreting the chemistry between various characters. While the plot is exciting, it’s also full of jargon and complicated legal issues, which requires the audience to watch the hour-long episode with rapt attention. This can be a difficult task, but the direction and the actors have done a wonderful job in doing so. I can’t wait to see what Suits holds for the next half of this season.