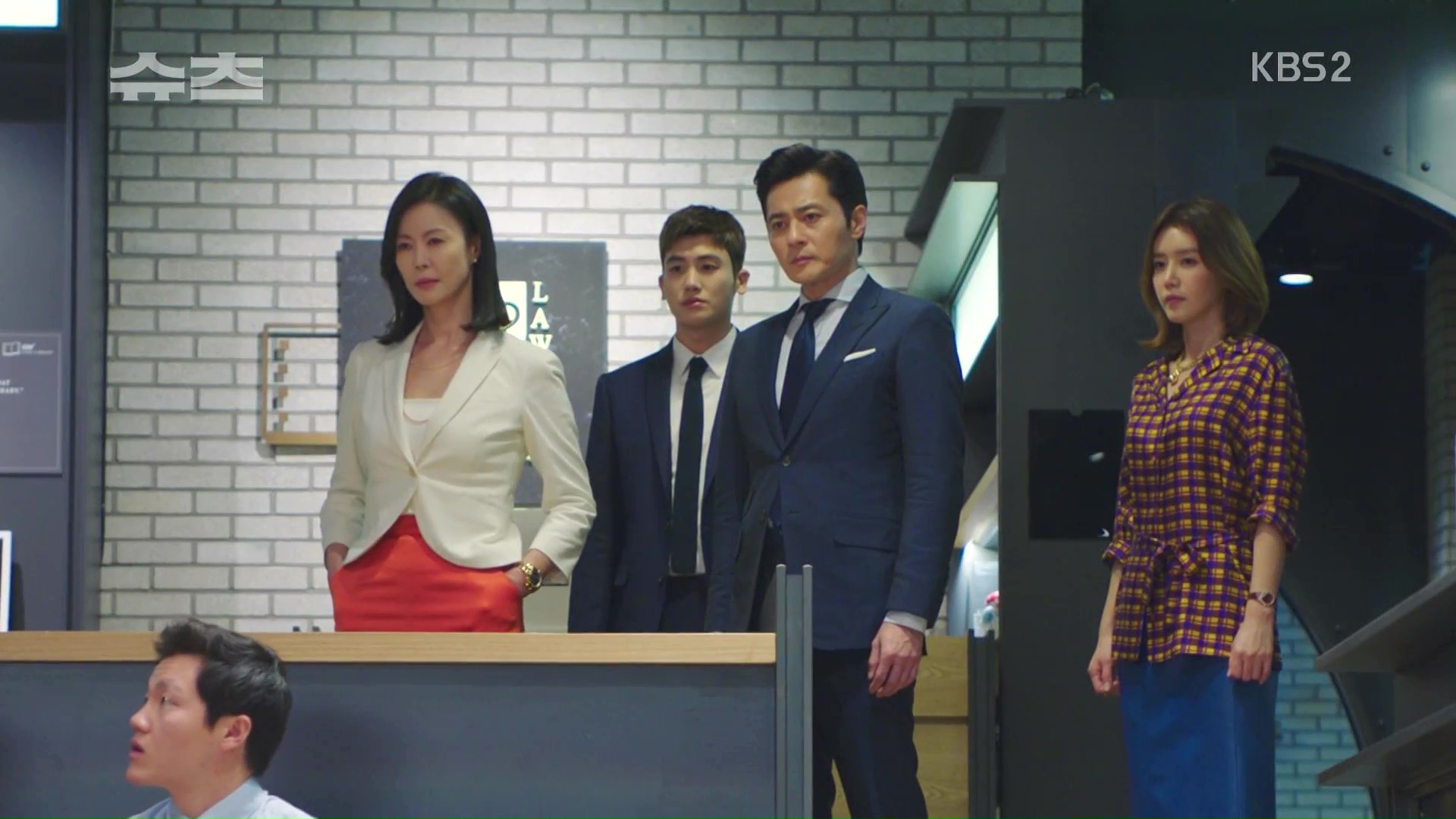 It’s common to have a lingering sense of emptiness, and a deep-seated feeling of “What now?” after a drama ends, making us scramble to fill that void with behind-the-scenes videos, with interviews, and by stalking social media posts. Anything to get more. However, Suits has been unique and exceptional from the start, setting itself apart with its fantastic character development and fast-paced, engaging plot. In the same way, Suits also differed in terms of its ending. It left minimal strings loose and provided a proper conclusion, leaving me feeling absolutely content. The 16-episode drama built up its climax to the perfect height and delivered to its viewers a close-to-perfect ending, allowing them to have a sense of closure (and no gaping hole in their chests).

Like the first eight episodes, it is pleasing to note that characters continued to unfold more sides to themselves in the second half. The characters were constantly evolving as they grew to adapt to the crises around them. Geo Yeon-woo (Park Hyungsik) showed growth in his professionalism, learning to reign in his emotions when need be, but also develop into his own type of lawyer. In turn, Choi Kang-seok (Jang Dong-gun) showed a more vulnerable and emotional side to himself. Kim Ji-na (Ko Sung-hee) allowed herself to let go of previous grudges, and learnt to move on. Even the supposed “bad guys”, such as Chae Geun-sik (Choi Kwi-hwa) and supporting character David Kim (Sun Seok-gu), showed some heartwarming sides without having character changes that were too drastic and therefore, unbelievable. 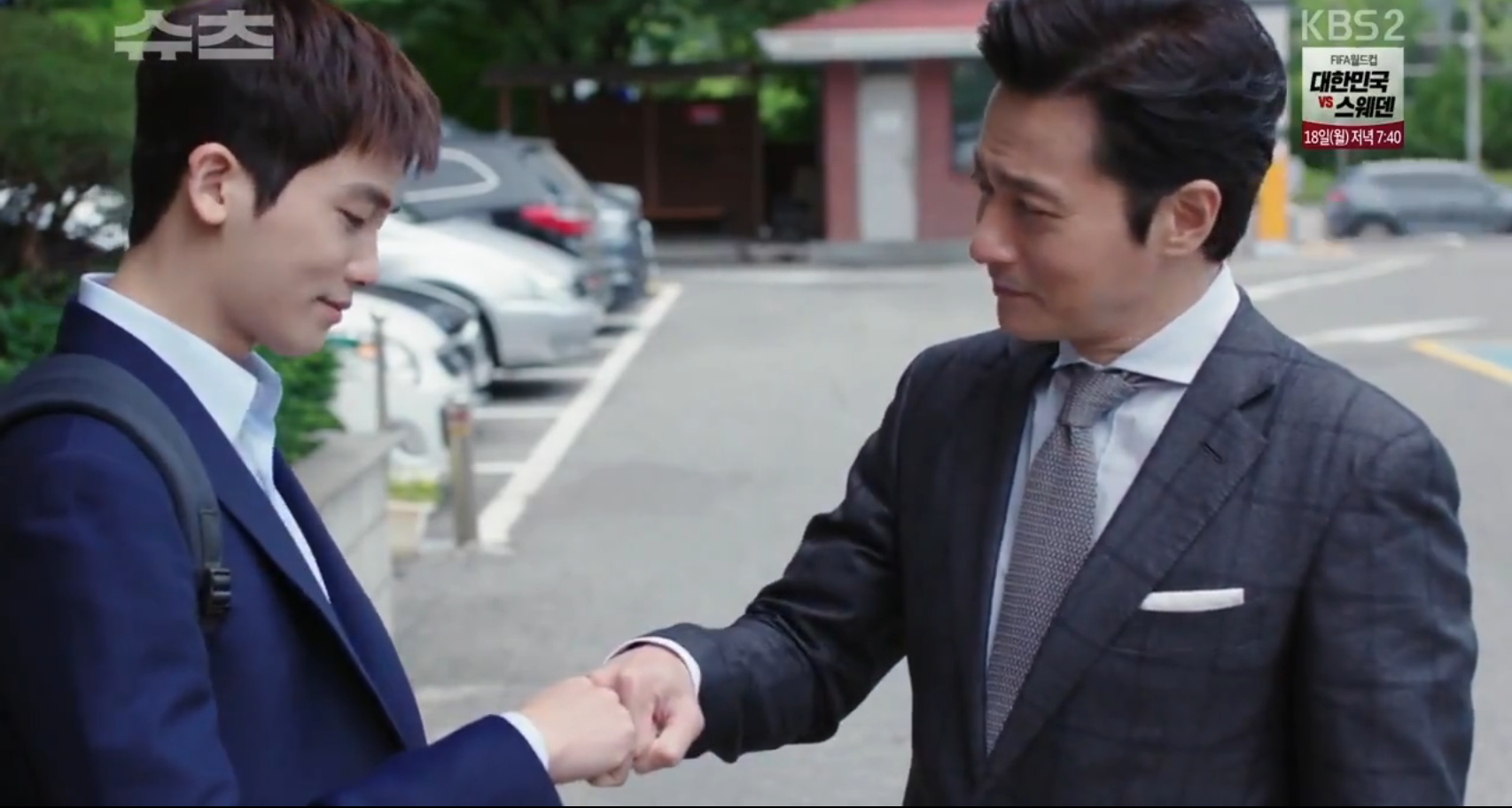 One of the catalysts behind these notable developments were the intricate and evolving relationships between most of the characters. It seemed, no matter how close or distant these characters were, the actions of one character had repercussions on almost all of the main characters. The ripple effect that was created by the behaviour of one tangled all their lives together, whether they liked it or not, and forced them to adapt and mature. However, more so than the convoluted and elaborate relationships, it was the plot development that really made the latter half of the show enrapturing.

I won’t lie — despite all the rave, episodes 9 and 10 had me yawning. Of course, there are very high chances this had to do with the fact that I am a fan of Suits (US) and know the plot of the show inside-out. What did impress and leave an impact was the fact that writer Kim Jung-min and director Kim Jin-woo fit almost two and a half seasons of the original show into 16 episodes without throwing the viewers into confusion. With Kim Jung-min’s careful editing and meticulous Korean contextualisation of the original script, Suits introduced various plot twists without overdoing it. In the concluding episodes, as Kam and Hang were facing a complication, so were Ha-yeon, Kang-seok, Yeon-woo, Ji-na and Da-ham (Chae Jung-an), all while being somewhat involved in each other’s problems. To be able to convey this without disorienting the audience is truly a testament to Kim Jung-min’s skills at breaking down the original plot and making it consumable over a 16-hour period. 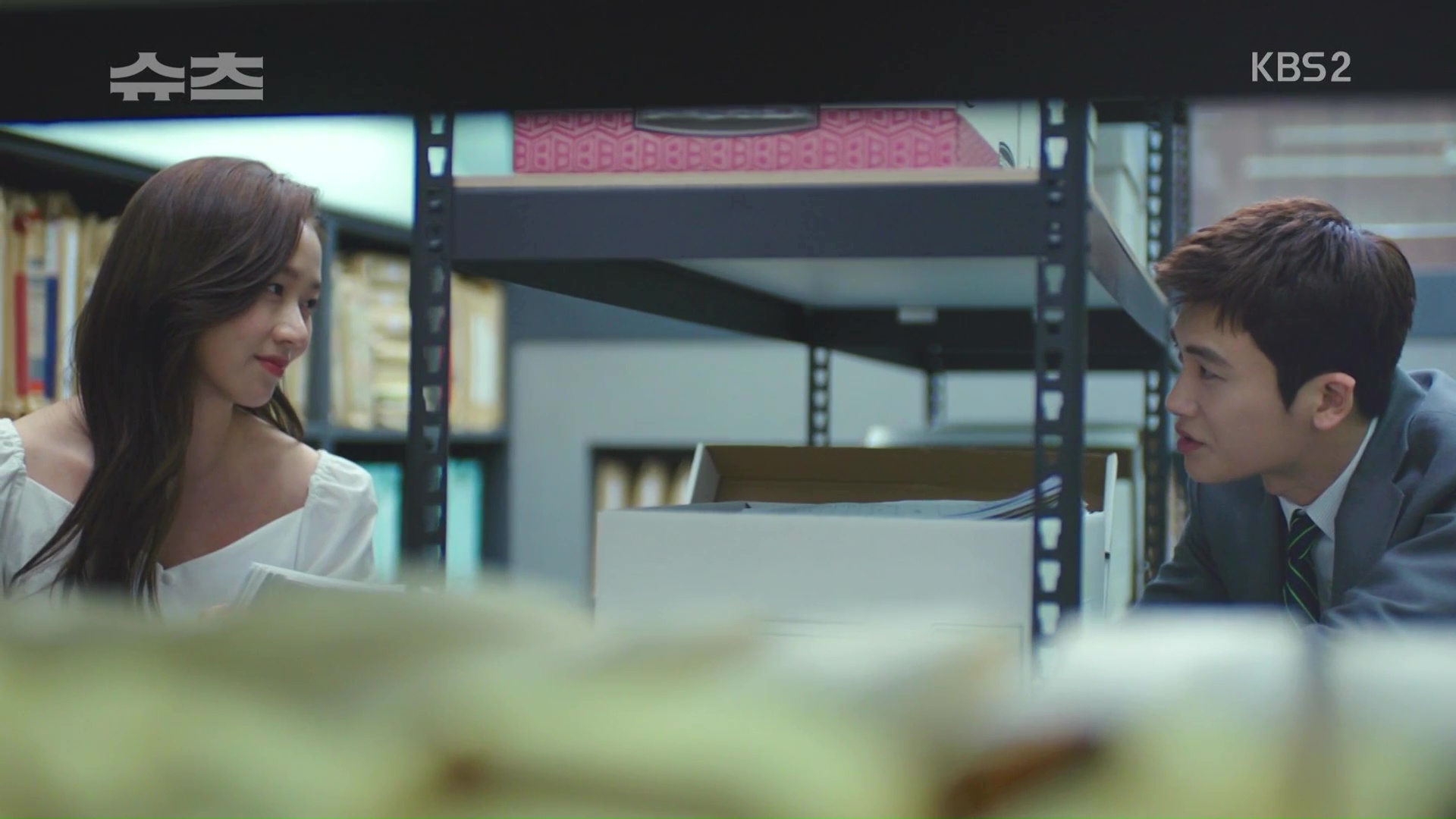 Kim Jin-woo’s direction, too, also allowed for the smooth flow of the plot. The director did an amazing job in showing the plot and multiple sub-plots simultaneously without needing viewers to constantly backtrack. Certainly, this may not be surprising coming from the director of popular dramas Healer and Good Doctor, but credit is due where credit is deserved.

One of the most common complaints online was the lack of focus on the romance between Yeon-woo and Ji-na in the finale, although that was one of the redeeming qualities of the drama for me. Ever since the pilot, the focus fell on the bromance between Yeon-woo and Kang-seok, and it was this relationship that was the spotlight during the finale. Yeon-woo’s actions centered around protecting Kang-seok, and hence the firm, while Kang-seok finally followed Yeon-woo’s plan of action, rather than ordering him around. Their relationship was the core of Suits, and it was only apt that the drama ended revolving around the two of them. Moreover, Ji-na and Yeon-woo’s storyline was not left incomplete; even after Yeon-woo is exposed as a fraud, Ji-na continues to wear the ring given by him, and promises to wait for him until he returns from prison. The key reason for this is his eventual honesty. 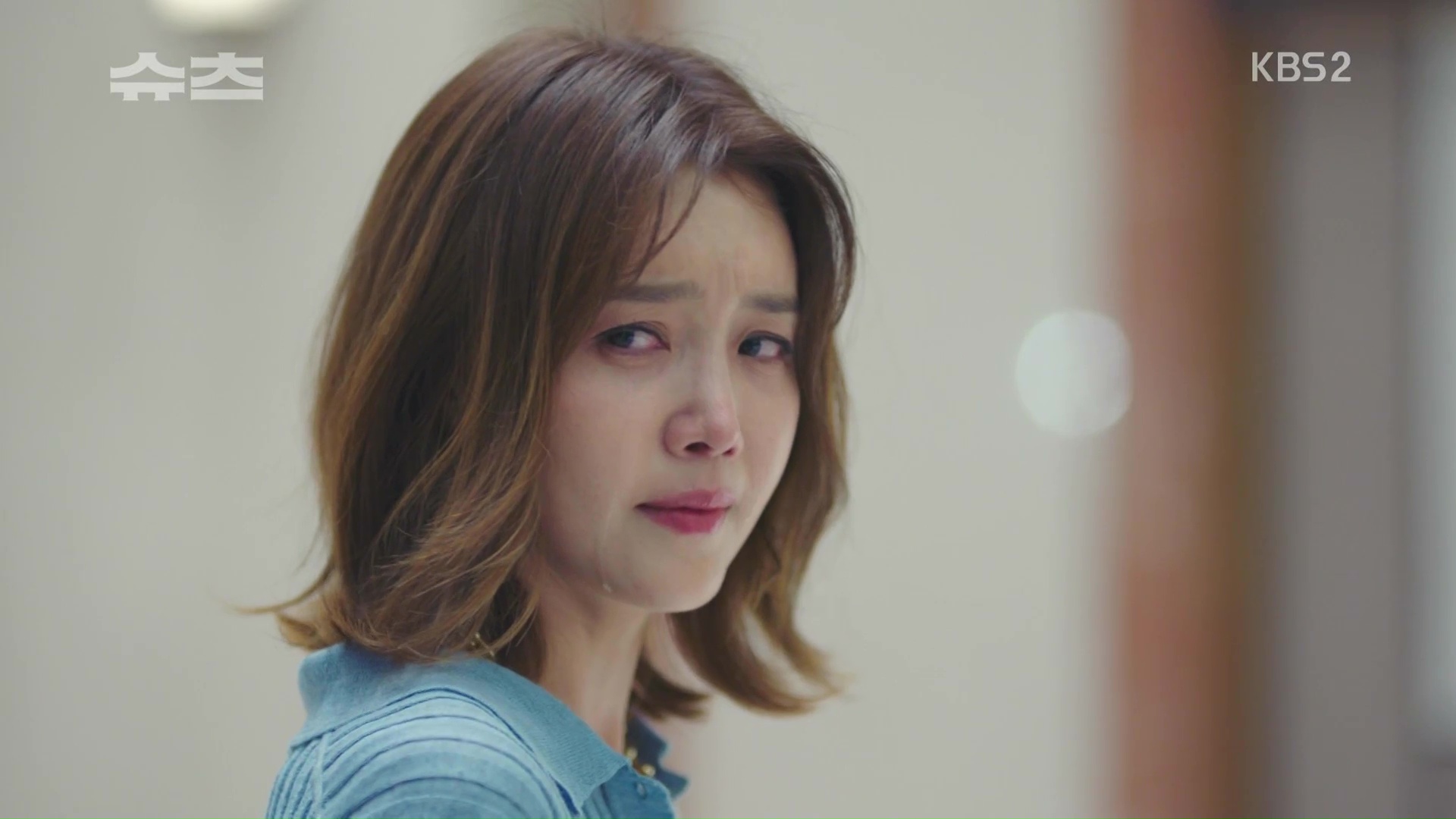 In fact, the lesson of honesty, as well as loyalty, runs throughout the drama. The show doesn’t preach about the virtue of honesty, choosing to simply show both sides of a coin — that there are consequences of telling a lie, as well as telling the truth, and it’s on us to think about which consequence to deal with. Da-ham (Kang-seok’s secretary) lies to him for his own benefit, but eventually receives the silent treatment from him, which is a pretty big deal because their relationship goes way back, founded largely on trust and loyalty. Yeon-woo lies to save the firm (later, he comes clean), but suffers from the disappointment from Kang-seok and Ji-na. The most heartbreaking moment would be when he lies to his grandmother about going overseas to study (he was actually going to jail). He does so only because he does not want to disappoint her, only to end up breaking down in loud sobs in her arms without being able to tell her truth even though he really, really wants to. (Major spoiler alert: she passes away without him ever being able to come clean, which makes the whole thing very sad.)

Additionally, as mentioned in the previous review, the actors have done a wonderful job in bringing these characters to life. Hyungsik’s portrayal of Yeon-woo took me a while to get used to, but now I cannot imagine anyone more suitable for the role. Sung-hee’s depiction of Ji-na, while being very different from what I expected, was admirable. Her acting allowed Ji-na to be her own person, but concurrently also made her an important part of all the relationships she was involved in. Geun-sik, although highly unlikable, was made human and vulnerable through the small mannerisms given to him by Kwi-hwa.

Summing up, the symphony between the writing, directing, and acting breathed new life into this remake of Suits. I’m not one who follows K-Dramas religiously, and only watch a handful of dramas when I have the time. The decision to watch Suits was solely out of the curiosity due to watching the original drama. I have to say, it’s one of the better decisions I’ve made — Suits is easily part of my top few K-dramas.