Music Core - I'll Be Back to Say Goodbye 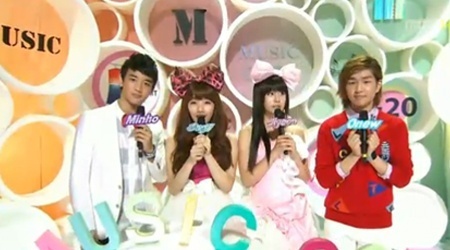 Onew, it's no fun to pick on you when you make it this easy.

Look at that! Today we actually we have a jam-packed show! Good for you, not-so-good for me. How so? When Music Core starts putting effort into their shows I have less time in which to do them – which mean less of my brilliant witticisms. Ok, you can sit down. I see you cheering behind your computer. Let’s do this thing!

Our very first Korean Kenny G; I like him though. It’s not often you hear real instruments on the idol stage. That’s if he was actually playing for real….

What do three Hyoris with good voices equal? Those dancer outfits are….unfortunate.

You guys know how I songs get stuck in my brain really easily? Well, congratulations, Girl’s Day.

The outfits are still a bit eye-bleed inducing, but I’ll let it slide since there was genuine effort this time around. Don’t worry Girl’s Day. If Secret can get out of the basement, so can you.

It’s funny how certain artists (SUPREME TEAM) know they’ve made it to a level of respect where they don’t even need to appear on these shows anymore. It’s definitely not phoning it in, but they sure as hell don’t have anyone to impress. Co-Ed do an an outdoor version of ‘Bbiribbom Bbaeribom’ (gonna get really tired of copy and pasting this) as confused passersby wonder why there’s a group doing Lady Gaga karaoke in the middle of Seoul. *Younha* If I could put hearts around her name I could. Youhna’s another part time/over time Japan artist, and it shows. There’s just a level of polish there you don’t see in a lot of Korean performances. I can’t wait to see what happens when we finally see SNSD get that “sheen” (oh har har – it’s just a joke Sones. For the record, I think strangely for them, the opposite proves true). J.Lim has a nice ballad voice, but honestly, I’m most interested in seeing what she wears every week. She looks good, but it’s like she’s about to go ice skating in that thing. Hunngh. Nine Muses. We meet again.

This is better than ‘No Playboy?’

Yes, we’ll go with that.

I think at one point I described U-KISS’s new performances as “Matrixy” but today they just look like pissed off businessmen. I think it’s the brown.

DO NOT show your friends the MV if you want them to understand why you like kpop. They will hate you forever.

Depression time! No, it’s good to have people respect a male ballad group. Now excuse me while I reflect sadly on the last six years of my life – what have I done Lord!? No 0h oh oh

You may laugh, but this is my song for noraebang night. Represent!

Nice to see Suzy isn’t always the only one always stuck with a skirt. Or pom-poms on her shoes. Bet you didn’t think of that G-Dragon?

It’s sweet how excited South Korea is about this G20 Summit thing. Personally, I’d be a little more discerning in what I displayed culturally during a global summit, but, aw, well, everyone’s having fun. But I would still leave Nine Muses at home. 2PM return to do their running man all the way off the stage. Dang that was a short promotion. However, if I were them, I would save the money for a better song. JYP’s probably pinching pennies now that Wonder Girls are preparing their big foray into America. Let us enjoy the 2PM-aerobics one last time, before it’s gone, forever (but you know the running man will be back). It’s ‘Hoot’: Cowgirl Version. I sat in front of my computer screen forever trying to figure out what was off about this performance until I realized – no heels! That’s such a rare thing to see with these girls it’s a wonder they can dance without them anymore. Also, I never noticed Sunny before, but… Jessica was the only member that could maybe halfway pull off that hair color.

It’s like with each concept we have another manifestation of Barbie genie, Barbie spy, etc. Kind of like that one episode of America’s Next Top Model where Tyra takes all the ‘models’ for makeovers even if they looked perfectly fine before because they’re getting a new look dammit, and at least one (or two or three) girl breaks down over the course of the show because Tyra convinced her to go bald, or dye her hair some color not found in nature, and yeah maybe she doesn’t look as good as before but we gotta up the ante, these girls have to prove they want this!