Kara's "Jumping" hits no. 5 on Oricon 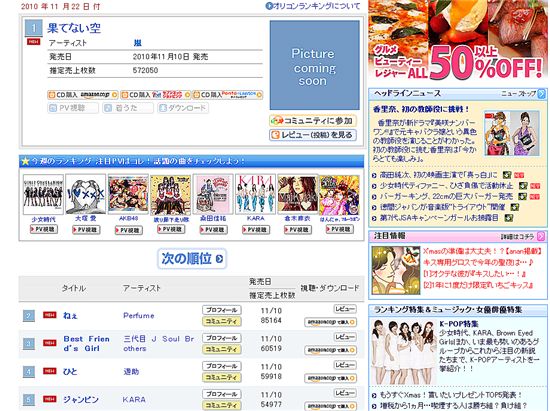 Looks like Kara is doing a lot better in Japan than they have been in Korea in terms of CD sales. The girls’ latest single “Jumping” has landed a number five position on the weekly Oricon chart.

Usually getting within top 5 for a Kpop artist in Japan might not be too huge a deal if 1) there are no really spectacular competing artists, 2) the difference in ranks reflect a huge gap in sales, but fortunately for the girls, neither is the case.

There were some big artists putting out singles this week, namely Arashi and Perfume, who took the #1 and #2 spots respectively. If you look at the sales (other than the behemoth that was Arashi’s best selling single of all time), there wasn’t too big a gap between the 3rd, 4th and 5th places.

Some Korean outlets are pointing out that Kara “beat” AKB48 like this is some sort of testament to the greatness of Kpop, but it’s been two weeks since AKB48’s “Beginner” release, so don’t get your panties into a twist.

Congrats to Kara and hopefully they’ll continue to do well in Japan.