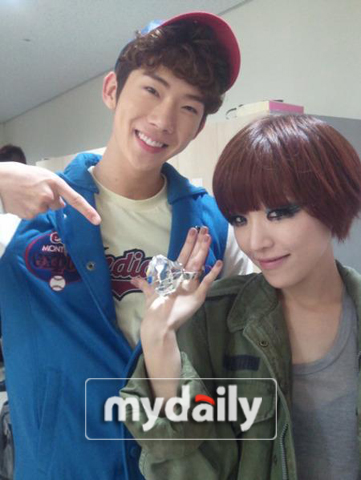 Because wifey just got an All Kill.  On We Got Married back when Jo Kwon reached #1 for his single “The Day that I Confessed” Ga-in paid up by giving him a back hug as promised.  When they talked about Ga-in’s upcoming album release, she told Jo Kwon that instead of a back hug she wanted a designer/name brand bag if she reached #1.

This week, Ga-in topped the charts of all the top Korean music charts including Melon, Dosirak, Mnet.com, Monkey 3, and Box Music. We’ll have to see if Jo Kwon also took care of Ga-in as a manger for her comeback performance like she did for him.  Ga-in also made a surprise appearance in Jo Kwon’s comeback performance as a back up dancer and many believe that Jo Kwon made an appearance in her comeback also.  Keep an eye on the back up dancer (?) girl to the right of Ga-in.

Many fans thought that the back up dancer girl was actually Jo Kwon, but other reports have said that it wasn’t.  We’ll have to wait a month or two when WGM catches up with the present to see if they cover the comeback on the show and reveal the truth (I personally don’t think it was him).