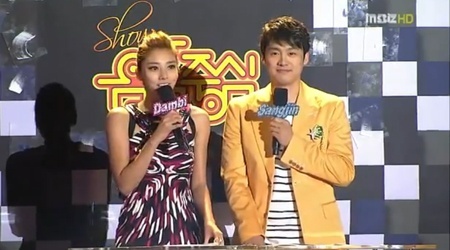 Seasons change, time passes by – and holy hell, Music Core has an actual stage! With an audience and everything!

All right, well technically this was probably part of a live special concert or something – or maybe the Music Core PDs finally got more than $20.50 to fund a show, I don’t really know. I’m not really sure where I am these days.

Son Dambi and announcer Oh Sangjin are the latest in the revolving door of announcers in lieu of the PD’s actually hiring someone to host this fresh time-slot of hell.

We’ve got the usual lineup of hit songs, but someone did not alert LPG, because they are back with ‘Doorbell of Love.’ Sorry, maybe I’m not used to hearing a song still being performed after this long. These days you get two weeks tops, three if you’re popular. 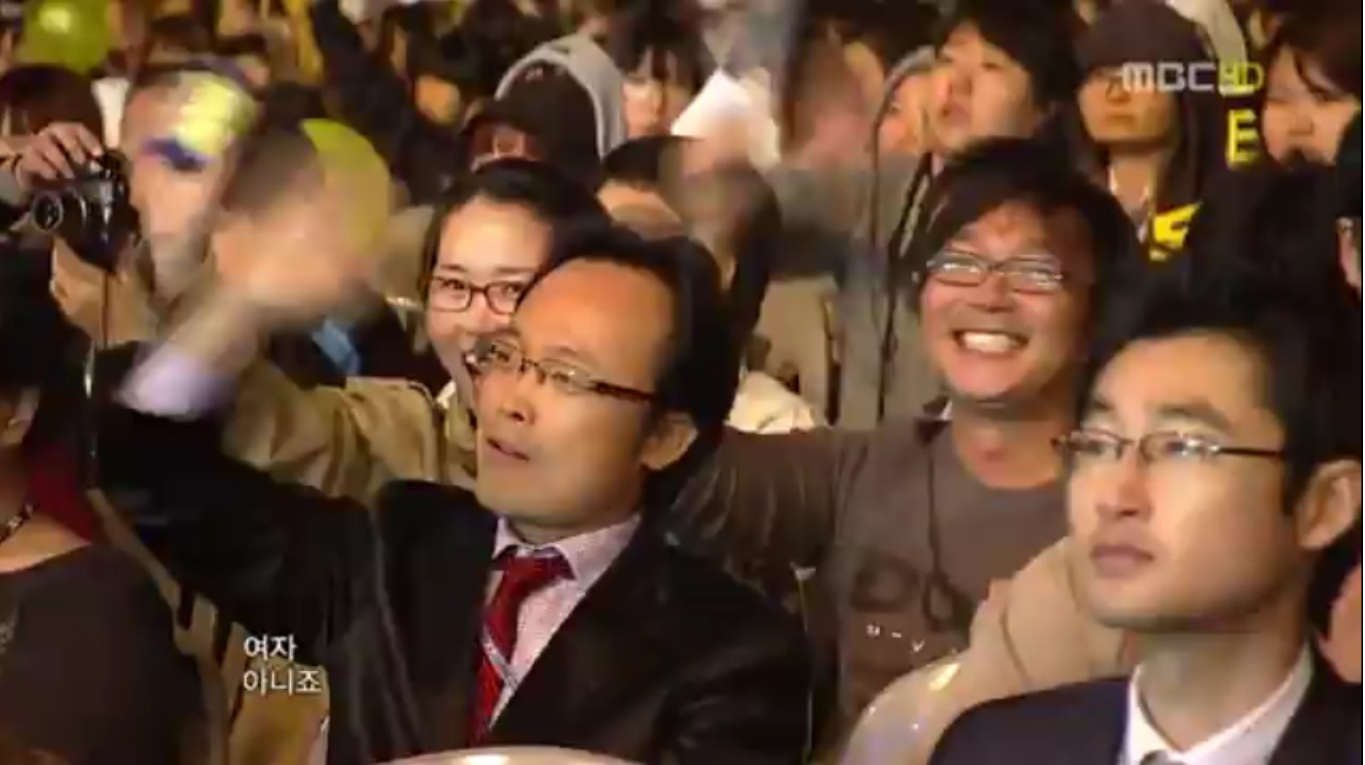 Aw, ahjusshis, this one's just for you!

Eru, with ‘White Tears.’ He’s also been promoting for a while, but he’s a ballad boy. I should be doing my journalistic duty and getting the latest scoop on the whole Eru/girlfriend/father scandal. Eru is damn lucky he’s not in the States. He would be on the cover of People right now (next to the Jersey Shore kids).

Sistar, and their first hit single ‘Shady Gurl.’ I’m going to admit something to you guys, but it doesn’t go out of this blog, you hear me? I like this song. I could do without the smiling and the dresses and the cuteness, but it’s catchy. It’s a good “walking to class song” you know? I tried using ‘Madonna’ but that just led to inappropriate dancing in the university quad.

Trax, with ‘Oh My Goddess!’ Name checking an anime and putting an SNSD member in your MV? Keep waving those balloons girls.

V.O.S sing ‘Full Story.’ Nice harmony guys. Watch out folks, the ballads are coming! They ‘re not all here yet, but they’re sneaking through.

Speaking of goddesses, Insooni with ‘Passion.’  It’s a shame I don’t have a clip. However, all of her performances are made of awesome so I’ll post an older one. I want to be her when I grow up.

Want me to tell you another secret? I like ‘She’s Back’…..I know I know. I can’t tell any of Infinite apart, I know none of their names but they get a lifetime pass from me forever for bringing that ray of sunshine into my life. ‘Come Back Again,’ eh, it’s a’ight.

Do you want to play a game? List all the things you would improve about this performance. Double-spaced, AP style, please.

Son Dambi and dB Rider. Aw I miss ‘Queen.’ It was kind of annoying, but it has a good message! Besides, it was entertaining to guess which part of Son Dambi’s outfit would fall off first. Costume people, is it so hard to dress a size  -0?

Aw, SE7EN. So sweet that you included your real life girlfriend in the MV, but be careful. Now that fans know you are a couple, they can ship you, and if they ship you, the relationship will have a fan base and god  forbid you guys don’t get married and  have millions of adorable babies or the world will implode. Think, “If You Give a Mouse a Cookie” except dark and twisted and with kpop fans. Wait, that would make a good drama *scribbles*

2NE1 is performing ‘Clap Your Hands’ which is good, as it’s my favorite of their first single trio. Still, I can’t help giggling whenever they do the ‘street’ thing – it’s never going to work for me with Bom and Dara, ever. I do like seeing a kpop group on stage every once in a while that looks like they’re experiencing sincere joy when performing. And Bom! She’s smiling! That gave me a warm fuzzy. Very little Minzy however, does not.

If 2NE1 were having the most fun, then BoA is the most professional, by a mile. It struck me when she had her comeback (as someone who has not been around for 98% of her career) how seasoned she is compared to everyone else. I mean, considering this has been her profession since about 13 you’d assume she’d be pretty good at it. Perhaps it’s the influx of inexperienced rookie groups that makes her professionalism all the more pronounced.

Well , that was  a respectable job Music Core – but Inki and Music Bank are not impressed. But hey, at least your stage setup is better than Mnet’s.

So, that is that, sorry for the lateness everyone, but I promise to…..oh – wait – what is that? Oh it’s U-KISS!

KT Music They still want their fans to know how bad smoking is, even if T.O.P. never looks sexier when he’s blowing smoke out of his mouth andomgukissyoumustburnallcopiesofthis NOW.

Have fun with Inkigayo folks!