I just want to say that I, for one, am relieved that Jay Park (the artist formerly known as Park Jaebeom of 2PM and later Myspace-South Korea scandal fame, for those of you living solitary lives without access to the internet in the past year) has not faded into complete obscurity (and infamy), but rather rekindled his passion for break dancing  and returned to the Korean spotlight (although a bit dimmer) once again, through music. It could not have been easy, so props to him for persevering through all the craziness and still reaching for his dreams; and honestly, props to the South Korean fans and netizens for accepting his apologies (for whatever all that transpired) and giving him another chance.

Anyway, back to the subject at hand-Jay Park’s HOTNESS. This time, it’s not just me fangirling away, but rather the fashion bible to many, Vogue Korea, that has called attention to his hotness. In an aptly titled spread for the October issue of Vogue Korea, Jay gets a little dirty. And it’s not that he’s just looking hot-with music collaborations and appearances at music festivals, fan meetings, and of course, his upcoming movie debut in “Hype Nation”, Jay is one hot commodity. 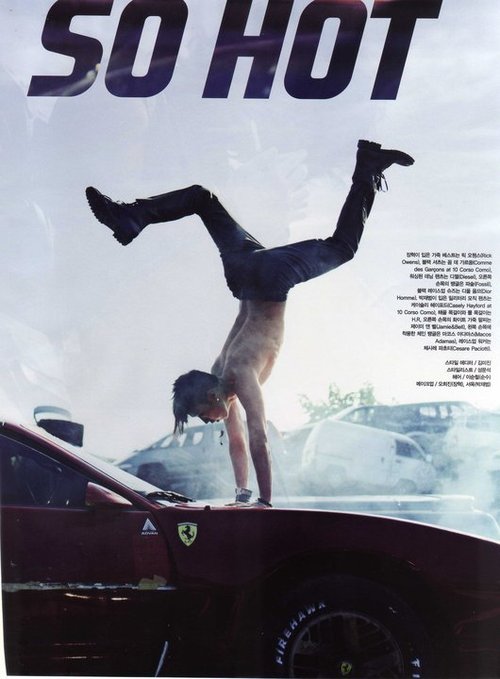 Is it just me or is this photospread an editorial allegory for Jay’s rise from the KPOP rubble heap? (It’s late and I’m tired-forgive me the philosophical waxing-it could just be that some editor at Vogue is a Jay fangirl and wanted to see him in greasy denim and workman’s boots toiling away in a junkyard.)