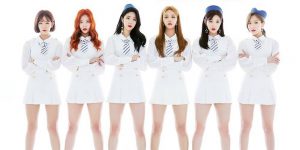 The term sajaegi carries along with it a foreboding nuance and it isn’t something new to K-pop, an industry rife with politics and corruption, which exists mainly to generate profit. On April 28, girl group Laboum had brought home Music Bank’s number one trophy for the first time ever since their debut in 2014. Their comeback song, “Hwi Hwi”, was up against IU’s “Can’t Love You Anymore”, featuring Oh Hyuk. But instead of celebratory felicitations, they were met with the wrath of netizens for accusations of committing sajaegi.

In layman’s term, sajaegi works by buying back albums or songs and reselling them to inflate sales on various music sites and programs. While many artists such as BTS, B1A4, Teen Top and Sistar have been roasted and stripped of their pride from a plague of sajaegi suspicions, there has yet to be any legitimate evidence to attest which groups have indeed conducted fraud for their album sales.

Netizens have a tendency of crying foul whenever a group from a less-established company wins unexpectedly. They were baffled and spiteful when Laboum won over IU, a veteran singer, by over 400 points. While this seems peculiar, it’s important to note that Music Bank houses a different ranking system than other music shows.

65% – Digital sales on charts
5% – Album sales
20% – Broadcast score (calculated based on how frequently a song is played on KBS television programs, dramas, or radios)
10% – Viewer’s rating 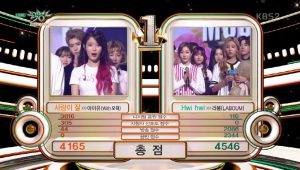 Laboum’s triumph was made possible mainly due to their broadcast score of 2,086, as opposed to IU’s 44, together with their high album sales of 2,344. IU had none since “Can’t Love You Anymore” was a pre-release track. The questionable validity describes exactly why so many eyebrows are raised.

However, many Laboum fans have quickly jumped into defending that it’s highly impossible for the girls or their company Global H Media to commit sajaegi due to their financial instability. Global H Media, a joint venture of NH Media and Nega Network, only manages Laboum and didn’t have much funds to start off with – they had even resorted to crowdfunding for Laboum’s comeback with MakeStar, a platform which works with fans to raise money for the artists. 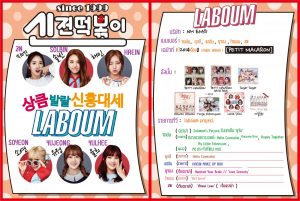 On May 2, Global H Media released an official statement explaining that the inflation in album sales is due to their endorsement with a franchise, Sinjeon, a street food restaurant. The advertiser has purchased albums through a distributor for promotional events at locations in both South Korea and foreign countries. Each album also comes with a 2,500W gift certificate for the outlets. It’s plausible for the boost to be backed up by Sinjeon but how many albums did they exactly buy to have resulted in the sudden ballooning in sales? 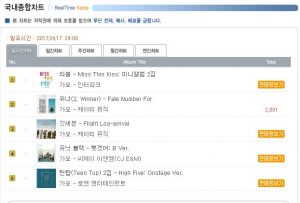 A few days into their comeback and Laboum was already ranked top on Gaon Chart National Physical Albums Ranking. And at the end of their first week of promotions, Hanteo revealed that they’d sold a whooping of 28,296 albums in total. Of course, credit must be given where it’s due – Laboum’s popularity has indeed been thriving, driven by their numerous variety show appearances and with Soblin as Music Bank’s emcee.

However, compared to the sales of their previous album, Love Sign, which sold 800 to 900 copies in the first week, the album sales for Miss This Kiss have observed an increase of 30 times fold. This raised suspicions because it seemed almost as if the company had predicted the overwhelming support and printed sufficient copies for this comeback. 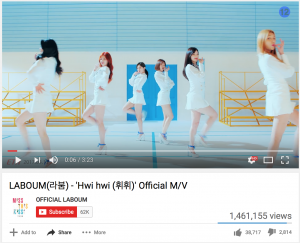 There’s also no exceptional spike in their YouTube views – “Hwi Hwi” stands at roughly 1 million, which is akin to their other MVs, implying that there hasn’t been an influx of fans or views since their previous comeback. Thus, the significant increase in the album sales is indeed very questionable. Of course, there are instances whereby sajaegi claims are nothing more than pride — hurt fandoms that refuse to believe that their favorite artists didn’t win.

Hence, let’s hypothetically agree that sajaegi has been committed – but how harmful is it exactly, and can it be possibly justified? 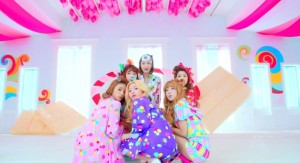 Artists are often thrown under the bus and defamed mercilessly when accused of sajaegi, without a thought spent on why it even exists in the first place. As more new groups are awarded trophies for first wins, their accolades continue to be scrutinized and questioned even if they deserved the win. In all honesty, though an inequitable practice, sajaegi can theoretically help to bring more equality to the music scene.

Since mainstream K-pop is a fundamental capitalist industry where established agencies such as the Big 3 dictate and dominate, sajaegi can help balance out the playing field for smaller and less well-known companies by shining light on their artists, who are undoubtedly just as deserving of the spotlight. It allows new acts, especially from such companies, to get their turn to shine and gain recognition. Hence, is sajaegi hurting or helping the industry?

There are many reasons why companies would go to such extremes and commit fraud because at the end of the day, they’re all on a constant pursuit of profit and popularity. Most companies often put profit over people. Knowing that doing well in music sales can guarantee money to roll in, which then leads to more endorsements, performances and fame, buying back their artists’ own albums to increase sales might be offset by such materialistic gains. 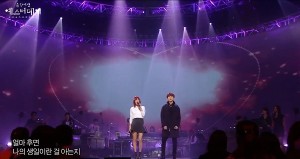 Having said that, manipulating sales is still undeniably an unethical practice. Cheating to win is morally dishonest. Yet, this is derived from a more prevalent issue of greed and corruption in the industry where people take risks and play dirty. There’s always going to be a scapegoat who has to take the fall eventually. This time, Laboum is left behind to be a scapegoat for this inevitable greed in the industry. Victims or not, the damage has been done and recovering isn’t going to be easy. Soon, a new group will fall victim to this controversy and the vicious cycle will go on.

Sajaegi tarnishes careers and creates fan wars. Although one can believe that there’s no bad publicity as any publicity is still publicity, the sajaegi label can continue to cling onto a group’s reputation. When Soyu released “Some” with Junggigo, they were accused of committing sajaegi although the song was clearly a hit in Korea. This only happened because netizens are obstinate in the way they perceive the so-called “sajaegi idols”, groups who’ve been previously accused of sajaegi like Sistar. 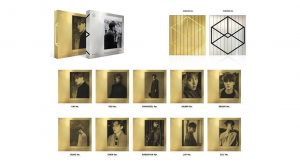 BTS also fell victim to sajaegi accusations when their album sales leaped over Big Bang’s in 2015, especially since the latter is a highly-respected veteran from the Big 3. Things reached a climax when they were awarded Melon’s Best Album Of The Year for HYYH: Epilogue – Young Forever, beating EXO who had been winning it for years. Unless the accusations are disproved and reparations are made, sajaegi is something that’s going to negatively follow some of these artists for the rest of their career.

But if we’re talking about boosting sales, companies have leveraged on a smart marketing strategy to maximize physical album sales. Besides photo cards, companies have started to print multiple versions of albums, like EXO’s Exodus with 20 different versions. This strategy aims to attract fans to purchase more to collect or get their favorite members, even if it’s by random, and ultimately amplify album sales. Hence, is producing several versions of the same album to boost sales considered sajaegi or just a mere marketing ploy?

It is hard to draw the line with manipulation. For Laboum’s case, is bulk-buying from an advertiser also considered sajaegi, since it’s not done by their company? Some companies have also leveraged on providing incentives like a special dance practice video for fans to increase YouTube views for the original MVs, which in turn increases the SNS score on music shows. 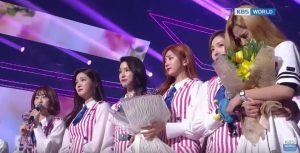 We’re back at square one. There is no solid proof, just speculations. We need more justifiable receipts to refute whether Laboum committed sajaegi since we’re not industry experts nor do we have access to authentic evidence. But what’s done is done and there’s only so much they can do to clear their name.

You only get one first ever win in your entire career – seeing them cry at their first win was a heartening sight and I’m glad that their hard work has paid off, despite the malicious frowns from netizens. I personally enjoy “Hwi Hwi” and I do hope that the girls would recover from this setback with a stronger comeback. Congrats Laboum!