It’s been a wild ride as BTS released their Most Beautiful Moment in Life (HYYH) series over the course of the past two years. We’ve watched them be young delinquents in “Fire” and “Run,” experience loss and violence in “I Need You,” and grow as artists in “Blood, Sweat and Tears.” Through all the sub-plots of Most Beautiful Moment in Life, there has been one constant theme: the tight bond between the members all on the cusp of adulthood. With BTS slowly growing up through this string of releases, comes the appropriate follow up to their tale in the form of the special album Wings: You Never Walk Alone, and its single “Spring Day.”

Some may say that “Spring Day” falls outside of the Most Beautiful Moment in Life Series, but I see it as a conclusion to the series; a moment of closure and reprieve before the group continues onward. To me, the MV for “Spring Day” serves as a final wind-up of the narrative of loss and growing up that we’ve seen through the rest of the Most Beautiful Moment in Life series. This is where the group bids goodbye to the concept — and their youth — in a truly beautiful way.

Following a frigid winter of teen angst and uncertainty, spring comes as a new beginning; the landscape begins to fill with new life, and new stories begin. And in true BTS fashion, they’ve managed to pull out some obscure literary references to tie into the plot of “Spring Day.” The most notable of which is the inclusion of the Omelas Hotel, in reference to the short story by Ursula K. Le Guin, “The Ones Who Walk Away from Omelas.” As DreamTeller theorized, the city of Omelas — as well as the hotel room in the MV — stand as a false utopia: a place where everyone is perpetually happy and carefree, but under the surface, one child must suffer in order to maintain the balance.

In the story, some residents choose to walk away from the false paradise to face a new world of uncertainty head on: in the MV we watch BTS finally choose to leave their youth behind and move forward into the future by boarding the train to spring. The Omelas hotel room is the center of the member’s nostalgia, the false utopia they have trapped themselves within in order to preserve the bliss of youth forever. But much like the sparkler and match they hold to the impending darkness, even the brightest of moments eventually burn out.

The Most Beautiful Moment in Life Series has centered around the journey into adulthood, with each member facing their own fears and insecurities along the way. Surprisingly, it is the youngest member, Jungkook who chooses to board the train away from Omelas first. He’s always been the one most reluctant to mature, most afraid of what the future holds. Yet, he is the one who first sees the need to move away from his youth. He is soon followed by Rap Monster, who walks through the cars of the train before returning to the Omelas hotel. In a way he is returning to round up the rest of the members, but his return also shows the struggle between moving forward and lingering in the past. Ultimately though, it is Jungkook who runs back to Omelas to gather the members before boarding the train a second time.

The rest of the members take their own path to boarding the train, each bringing their own baggage with them. Suga literally has a mountain of laundry and memories that he rests atop of while he tries to sort out all the change in his life, trying not to be resentful of the person who left him.

Did you change?
Or did I change?
I hate even this moment that is passing
I guess we changed
I guess that’s how everything is

Throughout the series, we’ve watched Jin routinely take snapshots of his memories, and this is a theme continued in “Spring Day.” Jin wants to keep bits of his youth forever, to keep things unchanging like a photograph even as the world spins on around him. In “Spring Day” Jin takes snapshots with his fingers — holding his hands up in front of him to watch his fellow members advance along the staircase of life. It isn’t until they’re all on the train together that he finally puts his fingers down, when he finally moves past trying to preserve his youth — their togetherness — forever, and moves towards growing up.

V and J-Hope both take a unique route to boarding the train. In the case of V, he’s always been the most wayward among the group — teetering on the edge of death, particularly through suicidal imagery. Somehow though, in each MV, he always pulls himself back and continues to trudge on. In “Spring Day” it seems he’s finally come to terms with his own demons as he waits patiently for the train. He even walks alone on the tracks to catch up to it before boarding with a smile on his face. J-Hope, on the other hand, is seen riding atop the train with a paper airplane — combating his fear of heights and finally being free. 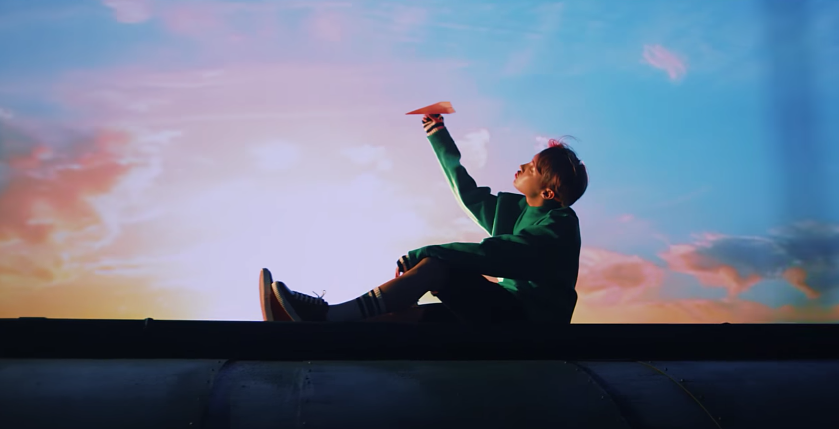 Jimin has the most interesting sub-plot, as he clings to the memory of those being left behind by carrying around a pair of worn sneakers. The shoes hint at death — at the memories Jimin is carrying around in his conscious — and his own grief and guilt for trying to move on without someone. He sits with the sneakers at the beach and atop a spinning washing machine, still unable to fully abandon the memories of those in his past. Even once he’s seated on the train, Jimin is inconsolable, shrugging away J-Hope’s comforting hand to his knee. Out of all the members, he’s the least ready to move on.

There is no such thing as eternal happiness, there is no real Omelas like everyone hopes for. Even the fictional utopia of Omelas had its darkness in the single child to who had to suffer for everyone’s happiness. Once the members have finally accepted that eternal youth is not eternal happiness, they are able to board the train together, to push forward into the unknown. There may be an unforgiving winter ahead, but once they pass through the tunnel, spring will come; and they will still be together.

When they get off the train in spring, Jimin finally releases the sneakers he’s been toting by placing the shoes in a tree; preserving the memory of youth forever, but allowing himself to grow away from it. In so doing, he honors the loss of youth — or potentially the Sewol victims — and those who didn’t manage to make it into adulthood. Cherry blossoms begin to swirl around the members, and they can all finally find some form of peace in one another.

What makes the MV for “Spring Day” so touching is that it’s not all hopeful. There’s sadness, reluctance, and longing as the members begin to move forward, away from the familiar and on to something new. “Spring Day” is all about loss, about missing someone, about clinging to youth. But most importantly, it’s about carrying on. The memories of the past will always be there, and we can chase them forever and end up in a hopeless cycle — like the washing machine featured — if we so choose. Or, we can mourn in our own way, move on, and truly live.

The song doesn’t really hit the mark for me — as most songs that include the Millennial Whoop do not — but the MV for “Spring Day” does. Loss is complex, growing up is never easy, and BTS manage to visualize that struggle through each member’s individual storyline. They captured the utopian highs of youth and happiness, the inexplicable pain of loss, and the will to carry on and live even when you’re hurting.

There are a lot of ways to interpret this MV based on your own personal experiences, which make it an especially poignant release. For some, the MV will be about friendship, for others it will be about the loss of a loved one, and for many young Koreans it may tie back to the Sewol tragedy which defined their youth. For twenty-somethings like me, “Spring Day” is a reflection of the terrifying cusp of adulthood, where we cling to the nostalgia of youth as adulthood slowly pulls us further and further away. No two people will have the same reading of this MV, but nearly everyone will be touched and moved in a personal way.

More than anything, I love that BTS have developed a concept through a series of releases, with multiple musical genres and presentations to boot. In a way, we’ve watched BTS develop and mature throughout the series, and come into their own as musicians and individuals — proving that art does imitate life. In that sense, BTS and Big Hit have also proven themselves to be true artists. They’ve given us music with feeling, and MVs with content that hits you right in the gut. Even if you’re a casual observer like myself, BTS haven’t failed to give the audience something to work with and mull over throughout the Most Beautiful Moment in Life series; and the depth and complexity of the releases have undoubtedly brought them many new fans along the way.

So now, we bid goodbye to this concept — to BTS’ youth — and look forward to whatever they decide to pursue next.