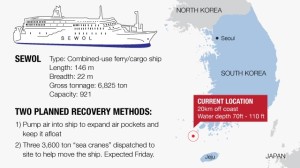 A warning: the following contains details which may be distressing to some readers.

South Korea has been rocked to its core by what is unfolding to be one of the nation’s biggest peacetime maritime disasters. What was just another 13-hour ferry trip from Incheon to Jeju island has turned into a sinking with hundreds of passengers missing.

The ferry Sewon was 11 miles off the southwestern coast of the Korean Peninsula when it began to sink. A distress signal was sent out jsut before 9 AM on Wednesday the 16th; within 90 minutes, the Sewol had fully capsized. Initial reports had lower figures, but since then the official passanger count has increased to 475, of which 340 are second-year students and teachers from Ansan’s Danwon High School on a trip to the resort island. 179 of these passengers are reported to have been rescued, while 271 are still missing. The official death toll has been rising even as this piece was being written, standing at 28 as of Friday afterneen.

As names of the deceased are being released, stories of heroism have also emerged. 17 year-old Danwon High School student Jeong Cha-woong reportedly gave his own life vest to a drowning friend and entered the water to save others.  22 year-old crew member Park Ji-young (right) made efforts to evacuate as many passengers as possible. one survivor recounted:

I repeatedly asked her why she did not first wear a life jacket. Park just said that she would get out of the ship after making sure that all passengers were out. She said the crew including her would be the last (to escape) 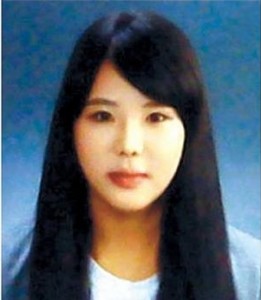 Unfortunately, many of the staff did not take the same approach as Park. In fact, the captain Lee Joon-seok was one of the first people to escape the ferry. He has since been taken into police custody; while he has definitely broken seafarer’s law by leaving the vessel without at least ensuring the passengers’ safety, he is now being regarded as a suspect.

This is due to preliminary investigations finding that the cause of the accident may not have been due to the ferry hitting a reef, as initially believed, but due to the ferry turning too fast. The ferry’s departure from Incheon had been delayed due to fog, and this maneuvre — which had not been approved — could have been an attempt to make up for lost time.

Another chilling detail emerged in the form amateur video footage: an announcement made by the ferry’s crew, instructing passengers to remain still and not make an attempt to leave the ferry. A crew member said that efforts were being made at the time to right the vessel after it began tilting. Thirty minutes later after the first announcement, an evacuation was finally ordered.

The rescue effort, meanwhile, has also been accused of insufficiency. Parents told media that they were initially told that all students had been rescued, only for that statement to be revised, repeatedly. The passenger count increased with each revision. The search for survivors continues on: divers have been looking for possible survivors, and on Friday cranes arrived to lift the ferry out of the sea. However, these efforts has been hampered by poor weather and visibility, and complaints that more should have been done by the authorities persist: parents of the Danwon students, many of whom are at the closest town to the accident site, Jindo, accused president Park Geun-hye and her government on Friday of not doing enough.

The lack of information is also being compounded by the spreading of false news. Initially, the contents of heartbreaking texts sent by passengers to their relatives had been revealed on news outlet; however, newer texts from passengers claiming to be surviving in air pockets in the sunken ferry have been announced to be false. Other unconfirmed information include that of the actions of crew, with claims being made that most escaped on the the only one of 64 lifeboats on the ship that were dispatched. It has also been claimed that the captain and crew were not the ones to alert authorities, but rather a parent of one of the students on-board, who called the police. 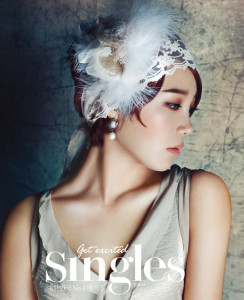 In the past, serious incidents involving criticism of the government have, somehow, coincided with the revelation of massive celebrity news, generally in the form of a dating scandal. However, the tragic nature of this incident has lead to entertainers in South Korea going into reclusion en masse.

All anticipated comebacks from K-pop artists, including Exo, G.Na, Block B, Lena Park and Junggigo, have been delayed or put on hold; A Pink cancelled its third anniversary fan meeting; promotions for Hyun Bin‘s Fatal Encounter and BoA‘s Make our Move were called off; and actors Jeon Ji-hyun, Kim Soo-hyun and Jo In-sung cancelled fansigns. The four main music shows for the week have also been cancelled, as well as all variety and comedy shows. Only a few select dramas are going back to air, though all promotion activities for upcoming dramas have been postponed.

Not everyone has been able to stay out of media attention, though. Exo, its fans and its management were criticized by netizens after reports of their first concert selling out in less than two seconds began appearing on news sites on Wednesday evening and ranking high on search engines. Another, more tactless, incident involved model Huh Jae-hyuk posting an image of himself submerged underwater in a bathtub onto Instagram on Thursday morning. He claimed ignorance at first, but eventually ended up deleting all of his social media accounts. Finally, fans of baseball team the Lotte Giants have been soundly criticised for loudly cheering their team on during a game in Busan on Wednesday — despite requests from the Korean Baseball Organisation to refrain from doing so — in particular for singing their cheer song, the title of which includes the Korean word for “ship.”

The general public has gone out of its way to show their respect to those affected by the tragedy by cancelling social gatherings and joining in vigils. Everyone has their eye on the news, but despite the fervent hope for more survivors, the likelihood of passengers being found alive continues to diminish. Questions about the cause of the incident and the conduct of those involved are already being asked, and will continue to be asked; but, for now, thoughts remain with the Sewol’s passengers and their families

We convey our condolences to those who have lost ones in this tragedy, and continue to hope, however futilely, that more survivors are found.