I.O.I Find a Concept That Works in “Whatta Man” 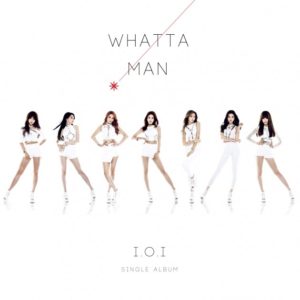 Four months after their official debut as I.O.I, the final project group from Mnet’s survival show Produce 101 have returned as a subunit with their newest single “Whatta Man (Good Man).” The group’s debut received mixed reactions, with the concept of “Dream Girls” deemed uninspired by many, and the song receiving even more disappointed reviews. However, the group itself hit a considerable degree of success upon debut, landing numerous CF deals and breaking records rating-wise on variety shows.

YMC Entertainment announced when the group was formed that I.O.I would have four promotion cycles: two as a group, and an additional two as subunits — of which this appears to be the first. Unfortunately, this unit’s lineup doesn’t appear to have selected its members according to strengths (i.e. vocals, dance) or image to present a side of I.O.I different from the entire group as a whole; instead, its lineup simply consists of the members not currently promoting in another group within their respective companies: Somi, Yoojung, Chungha, Sohye, Pinky (who appears to be adopting the stage name Zhou for this round of promotions), Doyeon, and Nayoung.

That is not to say, however, that there is no change of concept with this comeback. I.O.I is proving their diversity by transitioning straight from the fresh and innocent girls-achieving-their-dreams concept to the mature and fierce girl crush concept, complete with black leather outfits and a more powerful dance. The outfits in particular — as well as the fact that girls are singing about grown men — have sparked concern over whether it is too mature, considering half the members are still minors.

Yet in my opinion, while YMC may have indeed overstepped boundaries this time presentation and song choice wise, I.O.I does shine in this girl crush concept — with “Crush” and some of the songs during the missions of Produce 101 serving as additional examples. The members pull off “Whatta Man” effortlessly well, with the appropriate expressions and confidence to boot, and the skills to back it up.

The song “Whatta Man” samples its hook from the similarly titled “What a Man” by Linda Lyndell, and possibly the more well known remake “What a Man” by Salt-n-Pepa with En Vogue. The entire chorus is bold and aggressive, matching the lyrics of the song, which consist of the girls encouraging a man who’s caught their eye to come closer. The strong tone is created through the members’ rich harmony on the “Whatta man” lines, and the driving percussion line that dominates the instrumentals.

The verses also impress with their almost seamless mesh of singing and rap, which allows the members to showcase their different talents while not disrupting the overall flow of the song. On top of that, the song is ornamented by such an abundance of vocal acrobatics – Pinky surprises me with her high notes in the refrain every time – that first time listeners of I.O.I would likely not be able to tell this unit is missing the two main vocalists of the main group. It’s not the group’s catchiest single up to date, but it’s definitely up there in terms of production quality. 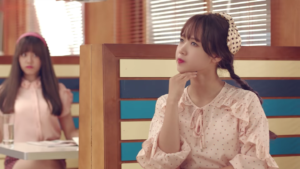 As for the MV, it’s well done to say the least. The styling of the members is on point – Chungha really matches black hair, Sohye looks less cutesy and more fierce with the colour lenses. Also, the more experimental hair colours – Nayoung’s ash grey and Yoojung’s purple dip dye – look great on the respective members. The black outfits against the dark red backdrop are a simple idea, but one that makes the performance of the song look stunning.

It’s also worth a mention that the dance this time is choreographed by Chungha, and if “Bang Bang” from Produce 101 was anything to go by, “Whatta Man” should be equally as hard-hitting in its full choreography.

The story component of the MV directly contrasts the dance and individual shots. Visually, it’s filmed in more faded, pastel colours. Concept wise, it’s a lot more youthful and girlish than the image the song conveys. The plot, albeit cliché, is fun to watch play out. The idea is your typical revenge plot: boy neglects girlfriend for another girl, girl undergoes transformation to look more conventionally attractive, girl finally catches boy’s interest when she returns to him only for her to dump him in the end. Truth be told, I’m not sure what the entire point of the makeover process is given Yoojung ditches him in the end, but I suppose the spite is worth it. 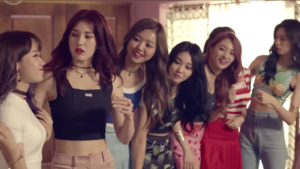 More importantly, the entire story is amusing; Yoojung’s versatility making her an appropriate candidate to pull off both the inept pre-transformation lead and the confident post-makeover one. There’s also the humorous detail of Sohye, the only member who’s clumsier than Yoojung, trying to follow along with what the others are teaching the latter herself.

Compared to their debut, it appears I.O.I have found themselves a concept that works in “Whatta Man.” The comeback shows that the members are already competent and versatile; all it takes is a good song to make their potential pop. 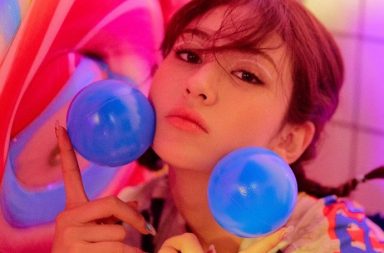 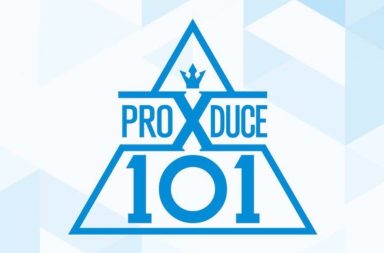