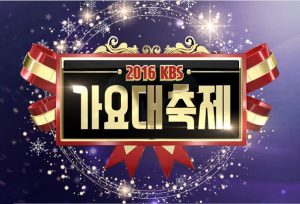 Each year, the three broadcasting giants pull together impressive line-ups and collaboration performances for their year-end music festival: SBS with Gayo Daejun, KBS with Gayo Daechukje, and MBC rounding up the year with Gayo Daejejun. Last year’s KBS Gayo Daechukje, in an effort to impress, suffered a major misstep with its excessive use of spider cameras and a resultant failure to deliver proper camerawork.

This year, the show took on a more modest approach: it was held in KBS Hall, which has a seating capacity of 1800 and a smaller, more conventional Proscenium stage. Instead of amping up the bells and whistles, it chose to focus on delivering quality camerawork (for the most part) that makes the best of the line-up. The result was a glitch-free three hours of solid performances that booted 2016 SBS Gayo Daejun’s sorry ass right out of this galaxy.

The scaling down of the venue and stage ties in with the heart-warming approach. Underpinning the show is the concept of the stages as presents for different groups of people. It’s a subtle but palpable acknowledgement that it has been a rough year, and it harnesses the power of music to reach out, connect people, and heal.

Without further ado, here is a selection of the collaborations and regular stages that stood out for me—some for the great performances, others for thoughtful planning, good camerawork, or fun details.

This cut of the performance doesn’t include the interview clip of Ken’s and Nayeon’s mother, but they commented on how they don’t get to see their children often. Being separated from family at a young age is undoubtedly one of the most trying parts of being a trainee and idol, and I can only imagine a mother’s worry at her child having a stressful career under intense public scrutiny.

The lyrics from “Mom” take on a new sense of poignancy in this context, with the persona asking his mother to forgive him for not realising and expressing gratitude towards the love and happiness she has given him until it was too late. Nayeon’s sweet, clear voice and an acoustic rearrangement gives new life to “Only Longing Builds Up”, an old song from 1979. The song is originally about romantic love, but it has been reworked into a tender expression of a mother and child’s longing for each other while being separated.

I was looking forward to this stage, but there were too many performers, with not much going on. It would’ve been better to select a few representatives from the 97-line, include more interactions and movement around the stage, and redistribute the parts: I’m a BTS fan and I love Jungkook, but in all honesty, DK’s powerful and stable voice is more well-suited to a rock number like this. The Seventeen band did a great job (it’s Woozi! On drums!), but the singing arrangement and the performers’ delivery didn’t manage to capture the edge and the energy of the original song.

Still, I picked this stage because I appreciated the sentiment behind it, as an encouragement to youths working and studying hard. BTS’s stylist hyung also deserves a special shout-out. All the artists were dressed in denim, but Jungkook’s outfit was a true stunner: the jacket was lined with studs in a nod to the rock genre, but the look was softened by embroidered flowers, and the ribbon tie added a finishing touch to the princely ensemble.

This was the stage that made me tune into the Gayo Daechukje. Both boys are great dancers with different styles, but the interesting contrasts within each of their styles puts them on common ground. Taemin has sharp moves, but he has also achieved a level of maturity at which he has an easy confidence that makes his dancing look effortless. Jimin hits out harder with his movements, but this power is paired with a controlled fluidity and a grace that no doubt stems from his strong background in contemporary dance. I’ll say no more, and let their performance do the talking.

Despite its origins in variety shows, the gender-swap stage has moved beyond kkab-ness and slapstick humour, and I love seeing such stages being taken seriously. Yoo-jung surprised me with her rap, and Seulgi cast great, chic gazes at the camera. But it was really the boys who stole the show. Bambam was fabulous and on point, and the others each had stand-out moments too, like Monsta X’s Minhyuk with his twist (3:27), BtoB’s Minhyuk with his smile at 4:26 and his Kim Tae-woo-like vocals, and Youngjae thoroughly enjoying himself at 4:30.

The cameras tilted too much for my liking, but for the most part they captured the formations well, at varying camera distances. There was more dynamism in the choreography than the rookie mass dance stages at SBS Gayo Daejun, with the groups taking turns dancing, allowing a more or less even distribution of screen time. Rookie collaborations are always so cute to see, and the bubbly song choice fit in perfectly.

The Seventeen boys are loved by many of us here at Seoulbeats for their showmanship and diverse takes on their own performances. For this stage, they switched up the “Pretty U” choreography for a skit-like opening. From the group crowding around Joshua to cheer him on, to DK popping up behind the human wall followed by Woozi and Vernon, this improvisation was filled with fun and cuteness without needing aegyo at all.

Little needs to be said about Got7’s performance, for they seldom fall short of expectations. I thought the audio was glitching at one point, but it turned out to be a surprise dance break. What I want to highlight, though, is the excellent camerawork that brings out the best of Got7’s dynamism and skill. The camera swoops in and zooms out just in time for key changes in the formations, cutting to close-ups with impeccable precision. There was also a perfectly-timed 360-degrees whip pan at the 2:07 minute-mark. That’s some high-level camerawork going on.

No fun shout-outs to other artists here, unlike at the Blue Dragon Film Awards or the SBS Gayo Daejun, but the confident, sexy lyrics are still delivered with incredible stage presence that was palpable even on camera.

I was also very impressed and amused by the flexible waists the trombone players seem to possess (you can spot them at the start of “You’re the Best”). It’s like they’re made of rubber. They’re also really into the performance, which added to the energy level of this stage.

I’ve been highlighting the kinetic and visual parts of the performances so far, but when it comes to vocals, BtoB definitely deserves a mention. I didn’t even realise they were singing live until Changsub‘s slip towards the end of the performance. I love this comeback for its mature take on their earlier melodramatic dance tracks. It already starts off on a heart-rending note, but somehow BtoB manages to keep sustaining and building up the emotions all the way till the end.

I can’t possibly wrap up this section without including Shinee, can I? I was wondering about the choice to put them right before the closing, since year-end festivals typically select songs that can hype up the atmosphere for the ending. But then I realised that isn’t what this year’s Gayo Daechukje is going for—they needed a solid, enjoyable, but not too loud performance to wind down the mood for the final mellow, heart-warming stage. The mix of melancholy and nostalgia in “Tell Me What to Do” and “1 of 1” served this purpose perfectly.

As I watched the boys own the stage with ease and a laid-back confidence, singing and dancing like they loved every minute of it, I was suddenly struck by a wave of nostalgia. They’re not a group I follow closely in terms of their variety shows and individual activities, but I’ve followed their music since debut, and they’ve come so far since their coloured-skinny-jeans days. K-pop can be such a hot mess, but it’s moments like this that make my fangirl history feel all worth it.

Best of the Rest 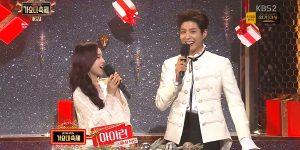 Sometimes, unexpected memorable moments pop up in the course of the programme, or in backstage cuts—the parts that make watching year-end festivals live more fun. Here are some of my favourite surprise moments, in order of appearance:

The show ended the same way it began—with all the performers on stage, singing a healing song of encouragement. The thought behind the performances threaded them together to prove that a year-end festival doesn’t have to be big and grand to hit home.

Readers, what were the performances and the moments that you enjoyed?