INFINITE Effect In NYC: Observations Of A Casual Older Fan 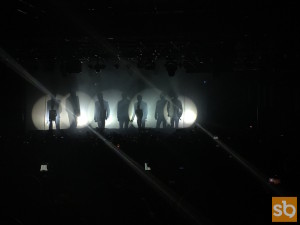 Don’t let someone trick you into thinking you must be a diehard fan of an artist in order to attend a concert. Yes, you can be a casual fan or appreciator of an artist and their music. And with that in mind, I attended Infinite’s INFINITE Effect World Tour concert.

I decided to attend the concert last minute and the section I was sitting in was obstructive view — which I’m going to call the “older casual/appreciator fans and parents” section. No one in the section stood up or screamed really loudly, but all of us sang along to the songs and chants (sans the parents).

Since I’m not aligned with regular fans and was able to relax and enjoy the concert, I had the chance to do some observing. So here are my casual older fan observations:

1. Hoya and Dong-woo sang more than I realized and most of the dancing vitality flowed from them.

In most groups, rappers just stick to rapping and with growing up with K-pop, that standard is the norm for me. And sometimes when a rapper tries to sing, it doesn’t sound quite right and it’s easy to tell that it’s not an act a rapper normally takes. But when it comes to Infinite, Hoya and Dong-woo sound so natural when it comes to vocalization that it came as a pleasant shock.

If you don’t follow Infinite, it’s a common fact that the group is known for being completely in sync when it comes to their dance routines. Concerts have a different feel and energy than a stage performance and music video, but the members of Infinite H were the ones I couldn’t take my eyes off of most times during the dance numbers. While the other members stuck with the regular choreography, you could tell these two were putting more effort into their moves and steps. The pelvic thrusts during “Paradise” were a bit more distracting than usual. 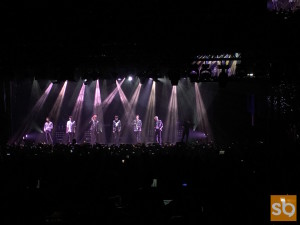 2. The group’s high energy and fan service/interaction was more than I expected, but wasn’t over the top.

When I think high energy, I think Big Bang (and it might be unfair to compare the two groups), but anyone who has attended one of their concerts know this. If you’re looking for a non-stop party, pick Big Bang. If you’re looking to enjoy yourself, Infinite is the way to go.

The latter, in my eyes, is more performance-based than living off the crowd’s reactions. This is not a bad thing. Their energy was converted to a different type that still made the concert enjoyable. A group like Big Bang feeds off the fans’ reactions and reacts accordingly. If you don’t get hyped, then they won’t either. I feel Infinite outputs their energy continuously. It shows in their choreography while other groups might display it with getting closer to the crowd as a whole. Infinite never looked bored and they truly looked happy performing.

From what I remember from past concert experiences, I can’t say I’ve ever seen an idol interact with a crowd so much. During the song “Entrust”, Sung-yeol and Sung-jong were using the fans’ phones to take selcas with them (before handing them back) while Sung-kyu had fans sing into the microphone. During “Cover Girl”, the group had paper airplanes of different colors (one color for each member) that they flew into the crowd. In that moment, I was glad I wasn’t in general admission for I would have been crushed by the wave of people all reaching out and possibly fighting for the airplane thrown by one of the members.

3. There was a translator. 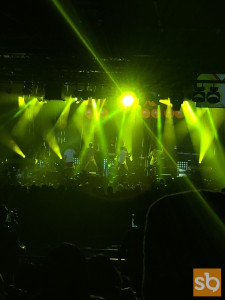 When I got into Korean music around 2002 or so, idols coming to North America was a rare event. My first K-pop concert was Rain (2006) and while he spoke Korean, there was no one to translate any of it because well, non-Korean fans wasn’t really a thing. Since then, I’ve attended more concerts and because of the lack of a translator, I motivated myself to learn Korean. But now, artists make more attempts to speak English. But I’ve never been to a concert where there was a translator until now.

Infinite did have some English speaking bits. The group left Hoya and Dong-woo to do more of the English conversing. Dong-woo was a little difficult to understand because it seemed more like he was speaking random words than words meant to be strung together to make a sentence. His sections were more about being humorous than getting a message across (but his “nice face, nice body” was understood loud and clear).

Hoya did a bit flopping back and forth between English and Korean and his words made the point of wanting to make the connection with the American Inspirits. Sung-jong spoke more English towards the end that was translated and memorized. Even so, it doesn’t demerit the intention behind his heartfelt words. All the other members kept their English to a minimum, saying “I love you,” “thank you,” and “I’m you’re cute/handsome boyfriend/Romeo.

4. Some fans were supporting other groups.

I’m sure this is something in Korea someone would be put on a stake for, but I, personally, wouldn’t attend a concert wearing another artist’s memorabilia. It seems insulting to the group in order to do so. 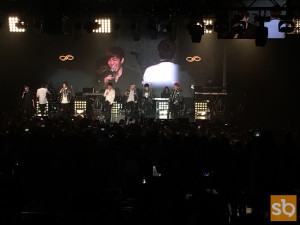 I can understand the fact that while you’re at one artist’s concert with another artist’s memorabilia on, it could be seen as, “I’m a fan of Infinite and (xyz) group and want to meet people who like (xyz) group as well.” But again, there’s already enough issues with color and fan wars in Korea and even some international fans share the same sentiment. For the record, I would not wear an iKON shirt to a TVXQ concert. Just saying…

5. Fans camped out overnight and probably faced consequences the next day.

This is something that sets me majorly apart of the younger fans, who I think are lucky to be into K-pop now. Woo-hyun, after seeing Phantom of the Opera the night before the concert, he went by the venue and saw fans lined up for general admission. If you’re not aware and despite the sixty degree Christmas, New York is definitely in cold winter mode now. Temperatures at night can drop to mid to low twenties. Thankfully to his question as to if they’re okay, the fans replied that they were fine and he advised them after the concert to go straight home and warm up.

After the concert, I got home after midnight and went to work the next day on little sleep. Assuming that a good number of the attendees (especially those who stayed overnight) are in college, easily skipping a morning class or the whole day won’t kill you or your grades. But those in high school probably felt the same pain as they went into school the next day. I headed to the concert after work and had to report back in the morning.

6. Fans knew the chants, specifically at the concert’s “end.” 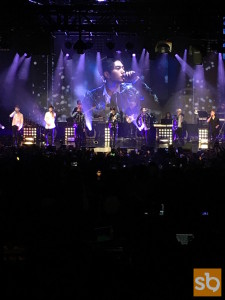 When I think about attending a concert, I want be surprised. So I wait in expectation of what’s to come. For that reason, I don’t look up set lists or fan cams from previous concerts. But anyone who has gone to K-pop concerts knows that when the first time an artist says, “It’s the end of the concert,” it’s really not the end.

So while waiting for a wardrobe change, I noticed the fans aren’t yelling “encore” which most people do at concerts. The attendees were chanting “돌아와 돌아와 다시 돌아와 ” which are the chorus lyrics from Infinite’s “Come Back Again.” The song, ironically, is the one they come back on stage singing.

This is something that might have been common knowledge, but I wouldn’t have known. I chalked it up to either people watching the fancams of the tour’s previous shows, forums giving out the chant information, or had been at Infinite’s first concert and this happened to be the same occurrence.

The concert lasted close to three hours — it was a first, where I didn’t feel completely drained afterwards and felt overly content with how I spent my time. I won’t take a chance missing out on another Infinite concert. Now that I’ve been to one, I’ll regret not attending the next one. I’m thankful that when a company announces a world tour, North America is actually included. Thank you to Woolim Entertainment, AEG Live and the PlayStation Theatre for making this happen.

Did you get the chance to attend Infinite’s concert? What did you enjoy?