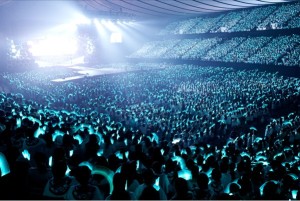 As international fans, most times, while we might call ourselves a Starlight, Primadonna, or Inspirit, or be a part of BBC, Shawol, or L.E.G.O., being truly submerged into a fandom is not something we can do. Most cafes or sites are Korean access only and you’re lucky if your favorite artist comes to your country or a nearby town to perform. There is something about the fandom family within Korea that there’s a good chance we’ll never fully be a part of and understand.

So when situations like color wars arise, it often goes over our heads. Maybe we don’t see the importance in a color because there are so many. To most of us (artists and color theorists aside), it is just a color. We can sit here and name some or go pick them out from a Crayola Color box. We might like Yellow Green over Green Yellow and it might be our favorite, but we don’t claim ownership of that color.

Sadly, the aspect of color works differently in the K-pop world. For years, dating to the times of BoA, H.O.T. and Baby V.O.X., not only did idols and groups have names for their fans, they used colors as a sense of identification. There’s a special feeling when a concert has a ‘blackout’ moment and there’s a sea of a uniform color for the artist to look upon and the fans to be enveloped in. In a sense, it’s as if the idols and fans become one in that very moment.

Colors are very important to the fans in Korea, so if an artist uses the color of a pre-existing group, especially one that hasn’t retired/disbanded, it is seen as disrespectful. Clubs are meaningful to the fans, so much so, they’re likened to family. If someone wrongs your family member, you’re bound to say or do something about. So when rookie groups ‘take’ a color or the same shade as their musical seniors, all hell seems to be break loose between fans. The issues may become so big that sometimes, the idols will be vocal about the situation themselves.

For example, Park Joon-hyung of g.o.d. took to his Instagram to calm Fan Gods down about BtoB using the same blue. The fans could only see the difference in the names, Sky Blue and Slow Blue, and not the shade of the color. Of course, to the older fans, it’s more than just a color, but Joon took the negative situation and turned it into a positive one by taking to the idea of BtoB using the same color as a sense of pride and flattery.

On the other hand, Kim Dong-wan from Shinhwa took other idols using their color, orange, as an insult. This occurred when fans of 2PM’s Taecyeon started using the color and when street vendors were selling orange balloons outside of a Big Bang concert, which resulted in the fans identifying Big Bang with orange. According to Dong-wan, Eric put in his two cents pretty much saying that if anyone else uses the color orange, no one is going to think of it as their color, but Shinhwa’s.

Block B and fans of Jang Hyun-seung of BEAST got ‘told nicely’ not to use orange because it belongs to Shinhwa. Even when Block B changed their color to purple, it was almost seen as lack of respect towards S.E.S., a three member female group who disbanded back in 2002. It might have not been taken as seriously since the group broke up, but fans still questioned, ‘Did you ask for permission to use it?’ (It, being the color purple.)

As color availability runs low, more idols and fan clubs clash. Winner and Super Junior fans butted heads over the same shade of blue. How dare Apink use pink as their color despite that it’s in their name because pink belongs to SNSD or even CSJH The Grace who came before them. And now, more recently, iKON, who doesn’t have an official color as of yet, was targeted by Cassies (short for Cassiopeia) ie. TVXQ fans voicing their anger with #RedisTVXQ.

Since when does a color belong to anyone?

Here’s a better question: how do you avoid a color war? 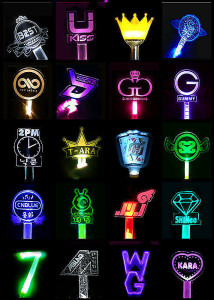 Some groups and idols probably have seen how nasty the color wars can get and decided not to subject themselves or their fans to what might seem as a serious or silly issue depending on the view. And quite honestly, what color out there could have possibly not been taken at this point? So while most groups and solo artists create unique names for their fans, some decide to go with symbols in lieu of colors.

Using symbols isn’t a new notion to K-pop but it’s a lot less common. While 1TYM, a group that debuted back in 1998, have black as their official color, they used towels instead of balloons; balloons were used more in the earlier days of K-pop, but now, light sticks replace them.

Some might confuse a symbol’s color as an official color. For example, Big Bang, contrary to popular belief, doesn’t have an official color. In fact, they use a crown symbol that happens to be yellow and their light sticks are white and yellow and black and yellow. But neither yellow nor black is ‘their’ color. There are other artists who have done the same: BTS has A.R.M.Y. bombs, Mamamoo has radish light sticks (that seem seizure inducing; you’ve been warned), Se7en has 7-shaped light sticks in addition to his official color, Lime Green, and Winner has W topped light sticks. On the other hand, some groups don’t bother with a color or symbol at all: missA, Ladies Code, Dal Shabet, VIXX, Boyfriend and many more.

It’s a smarter move because then companies can call copyright, plagiarism and ownership over a design or symbol. The same happened when YG Entertainment was called out for plagiarizing a bike shop’s logo via iKON’s album cover. The creator of the graphic was able to prove the concept of album’s image as an original concept, inspired by the symbols on the South Korean flag. Thus, the situation was diffused. This sort of scenario makes a lot more sense than people fighting over a color’s shade.

An icon or symbol of a group is original and belongs strictly to them, not a color that has been in existence before anyone even thought about using it the entertainment industry. So when these fandom color wars start, we international fans tend to think it is stupid and nothing to get worked up over, but also see the anger behind it. We get it, but will never be able to understand it fully. To us, a color isn’t a possession and you can’t claim ownership of something that wasn’t created by you. 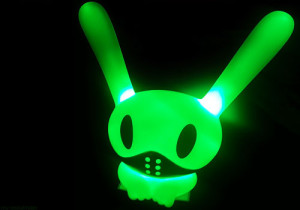 t wouldn’t be such a bad idea if entertainment companies shift away from color ownership and use symbols more often. It was okay a decade or so ago since there weren’t many groups and there was a plethora of colors to choose from. But, under the current circumstances, there are really no other colors out there unless you start creating and overwriting names for colors that already exist.

Korean fans are serious about protecting idols and what sets their idols apart from everyone else. Because of this, color wars break out. To dissolve them completely in the future, companies should spend more time creating something unique to the group, just like club names. No one has the same name to call their fans by so how can a color, a universal artifact, be owned by someone? Many people have the same favorite color, but it’s unlikely they’re going to fight about it. You know who does that? Children.

Tell me, what do you think about the concept of color wars? For any idols who have official colors, what type of symbol would you design for them?