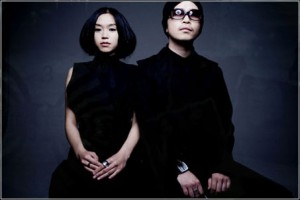 Fall seems to have brought a lot of artists out of the shadows because October was full of releases! Not only that, but the variety of different genres was something I haven’t seen since the spring. So let’s take a look at some of my favorite October singles that might have escaped your attention!

First up is the indie group Casker who show their unique layers of electronic sound in “The Smiler!” In this track, the electronic beats almost become a third vocalist and have their own solo in the middle. Once you think you can predict what they’ll do, they surprise you with twists and turns. The lyrics express the confused feelings of unrequited love. The singer clings to the hope that she can win over her crush, since he said that anyone who wanted to could do so. Even though she knows it was a joke, she decides to believe it anyway as fact. But at the same time, she wants to leave the relationship because it’s going nowhere.

The music video expresses these torn feelings as well. The male actor wanders around a desolate landscape which is being destroyed by things both big and small. Sometimes he is the one carelessly destroying things. Against her better judgement, the actress pursues him into dangerous territory, never quite able to forget him.

It’s a bit difficult to categorize this next song, but it seems to be a mix of lounge and new wave. Whatever it is, Jubora is just plain cool here. With her beautiful voice she sings to an unknown man, assuring him that he’s not the cause of her sadness. Throughout the song, she tries to convince him, as well as herself, that she doesn’t have feelings for him. She doesn’t explain why she doesn’t want to admit it, and she blames her bad mood on other things.

Were you worried? I can’t help but laugh
The wallet I forgot to bring, the lost umbrella on a rainy day,
and the sound of sentimental music are just making me moody.
I don’t know why either. Actually, it’s not that.
It’s not because of you, so just let me be.

The video is interesting because it gives you a peek into the mind of the singer. After the second chorus we see her thinking about kissing the man, but then she hastily tries to block it from her mind. When she finally admits that if it wasn’t for him she wouldn’t be feeling this way, we see just bits and pieces of his face. In the final image we see her, but her mouth is not drawn, showing that she still cannot fully confess her feelings.

Let’s switch up genres again and listen to Jung Gi-go’s soul R&B track “24:7.” Fans of Korean R&B will recognize the featuring artists who all lend their unique voices to the track. The song is about the first week after a breakup. Instead of facing it head-on, the singers throw themselves into work, trying to stay busy so that they forget what they have lost. There are also hints of trying to get back together and other confused feelings.

Stop calling
I want to rest, but my heart burns
Give me a cup of water
Work is piling up in the small workroom
I want to lie down, beside her
The time is passing fast (I want to run)
And I barely pass each day

By the end, all they can do is wait by the phone for a call that will never come. The video is simple, but sleek in black and white. It seems to have been filmed in some sort of art gallery so there are glass walls (invisible barriers) and also staircases that don’t seem to get you anywhere. It’s also a really barren, empty space. All of it shows the singers’ feelings of being lost in this strange place between having a girlfriend and being officially single.

Continuing the breakup theme is Shinhwa’s Kim Dong-wan with “I’m Fine.” It’s part of his first solo project in seven years, and he shows a different musical side to him in this song. It’s not your typical ballad with sad strings and a lonely piano, which is what makes it stick out. The lyrics are similar to “24:7” in that Dong-wan is trying to stay busy and trying to remember how to be single again.

I try to fill up the void you’ve left
I work out, I keep myself busy so I have no time to think
I’m back to watching movies alone
I’m back to who I was before I met you

Dressing in whatever, eating whatever, spending the day doing whatever
That’s how I am these days
Thinking of you makes me want to cry sometimes,
But don’t worry, I’m fine

At the end, he lists all of the things he’s trying to feel happy again, but nothing works. The music video is simple and subdued. He sings in a broken down building complete with cobwebs, showing that he might not be as fine as he says. Parts of the video quickly rewind and play again, so we know that he is in some sort of rut and not completely able to move forward. His furniture is covered as if he’s getting ready to move out, and yet he’s still there. Even the kitchen is filled with junk food which is usually comfort food for a lot of people. I liked all of the little touches which made this video different.

Let’s end with an upbeat song from Dia. They’ve been flying under the radar for quite some time, but their latest catchy single “My Friend’s Boyfriend” has been getting them fans and attention. At first, you think it’s going to be another video of a girl acting cutesy to win over the guy. But then the first “seductress” busts out this hilarious awkward dance that sets the tone for this fun and playful song and video. Even though the sets aren’t expensive, the members really bring them to life with their antics and energy. The lyrics are also fun and upbeat, even though the members are trying to catch the eye of another girl’s guy. They talk about wearing makeup, perfume, and clothes to match and attract him. They are also sorry that they like him, but they can’t help themselves. It’s more of an innocent attraction rather than something they planned to hurt their friend.

October was a great month of releases, and there were plenty of people who could be added to this list! Did any of you have any October favorites?