The Producers, Ep. 4-6: Seung-chan Gets A Spine 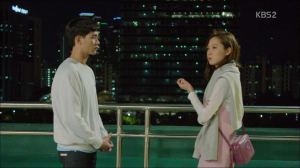 After a bit of a rocky start, The Producers really has found its voice. They’ve brought back a little more of the documentary style and found a way to naturally insert interviews. One of the most interesting things about this show is we see a lot more of the unglamorous side of television. There are a lot of little details that hint at issues we don’t actually think about. The staff goes without bathing or eating in order to get their footage, CEOs pressure PDs to edit scenes in a flattering way, and hours of raw footage are meticulously cut and pasted together into a comprehensible show. I never really thought about the poor PDs who actually have to test those crazy variety games (and I wonder who looked at a bunch of chopsticks and thought, “maybe I can break these with my buns of steel”?).

Celebrity rivalries and downright meanness, not often shown on camera, are given a spotlight. Dara schemes with another guest to get more airtime by laughing at each other’s jokes, and the results of the matching game are decided long before the cameras start rolling. Watching Korean television can give the false impression that everyone is friends with everyone else, which is ridiculous when you think about it; there just have to be people that can’t stand each other. But audiences want polite and happy celebrities, not sarcastic remarks or death stares. 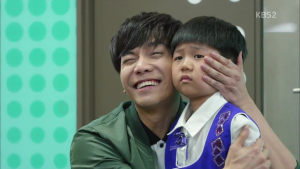 The pressure to be perfect is comically brought up when Lee Seung-gi appears and bends over backwards to maintain his prince image. He says that he meets up with other celebrities like Yoo Jae-suk so that they can let off steam over the constant pressure to be friendly and considerate (by doing more good deeds, of course). Crafting a positive image is so essential to celebrity status in South Korea, where what Americans would call small offenses could ruin a career. It makes you wonder if celebrities know where the company’s image strategy ends and their own personalities begin.

Like the TV shows they work on, the characters in The Producers also edit their own feelings to maintain an image. Vulnerability, and how people deal with it, is one of the themes in these episodes. Cindy’s (IU, Dream High) coping strategy for the cutthroat world of entertainment is to hide her emotions for the most part, at least the ones that leave her exposed. She’s so used to being detached and angry that she has a difficult time showing a sweeter, more approachable side during filming. But with a schedule that keeps her under constant pressure to perform without sleep or food, Cindy doesn’t have the energy to put on a happy face, too.

Unfortunately, letting down your guard can leave you vulnerable to pain. One of the most hurtful moments had to have been when Cindy wasn’t chosen by any of the male guests. In variety shows, you often don’t see the hurt feelings of those who are left behind; that, after all, would kill the entire mood. But it does have to hurt to be left out, especially on national television. 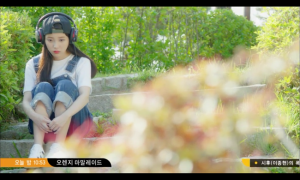 Cindy is just a product, and she knows it. Her CEO doesn’t care sincerely about her well-being, people don’t respect her privacy in public, and other celebrities ostracize her out of self-interest. Because of the lack of power over her own life, she expresses what little control she has in childish ways. For example, she doesn’t bow to Ye-jin and instead waves, a huge sign of disrespect. She bosses her manager around, constantly changing her mind about what she wants from him. The only person she is beginning to reach out to is Seung-chan (Kim Soo-hyun, My Love From Another Star) because he is completely sincere, not something common in entertainment.

Ye-jin (Gong Hyo-jin, It’s OK, That’s Love) also has a difficult time showing her vulnerable side. Part of this might be because she’s in a male-dominated field, and so she must never show a weak side. But she also lost her childhood home during the IMF crisis, a traumatizing event for a child. Like Cindy, Ye-jin hides her real emotions from most people. But instead of anger, she hides her feelings beneath jokes and friendliness. Also like Cindy, Seung-chan becomes a source of confidence for Ye-jin. He’s trustworthy and kind, which gives Ye-jin the push she needs to confront Joon-mo (Cha Tae-hyun, My Sassy Girl, Speedy Scandal) directly about what he heard when she was drinking. 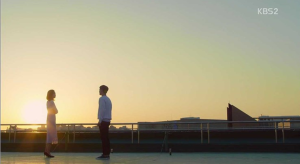 Seung-chan really is the star in these episodes. He grew from being a complete pushover to someone with more confidence. We can see that he is becoming more comfortable in his job and expresses his thoughts more; I doubt the Seung-chan from episode one would have called Joon-mo a coward right to his face. Although Joon-mo still chastises him for things such as predicting a low rating for the last episode, Seung-chan is much less apologetic. It’s great to see him become less afraid to express his ideas. His sincerity and kindness are influencing the other characters, too, especially Cindy and Ye-jin. I’m so glad to see that he’s not constantly stuttering apologies and bowing; you can’t be the office whipping-boy forever. Seung-chan is becoming so bold that he’s even started to rebel in small ways. He pours tons of sugar syrup into Joon-mo’s ice coffee, feigning ignorance. And, as a personal act of revenge, he crosses out the polite ‘-nim’ from Seung-gi’s name on his door.

So far I’m happy where the series is going. I wasn’t expecting Seung-chan to develop a love interest in Ye-jin, but I’m glad that they went that route. A love story with Cindy would be a bit unbelievable since she’s not in a place emotionally to be a good friend, let alone a girlfriend. A workplace romance makes for a more interesting story since the rookie has to walk a fine line between pursuing his crush and maintaining proper etiquette. Seung-chan is already testing the waters by calling Ye-jin “sunbae” at times instead of the more formal “sunbaenim.” And, of course, he gives her a head hug when Joon-mo upsets her. I’m not sure which man she might choose, but so far I’m on team Seung-chan!