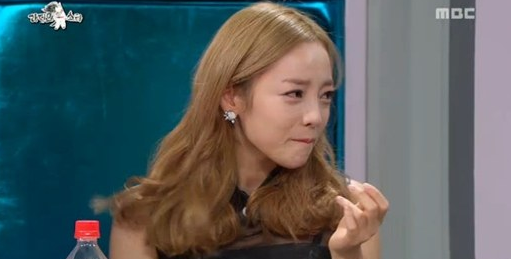 To put it as humanely as possible, there’s always going to be a raging double standard towards idols, or public figures of any sort really, in terms of how they’re forced to present themselves towards the public. It’s not a completely unfounded expectation either, especially considering how celebrities career’s are basically nurtured by how much fans love them and how the public perceives them. It’s all  part of their job, right? Look good for the camera, smile, keep the atmosphere up, don’t create unnecessary drama (unless, of course, Dispatch catches your scandal in the act). In that sense, is anyone actually surprised that Goo Hara of KARA is currently receiving an enormous amount of flack for becoming frustrated to the point of tears on KARA’s latest appearance on Radio Star?

The thing is, even with the obvious celebrity double standards in place, it’s still sort of head scratching that Hara is completely burdening all the criticism for what’s happened. In summary, the MCs asked Hara what’s one topic that she’d rather Radio Star not broach. Clearly uncomfortable with answering, considering MCs are known for turning whatever you don’t want to talk about into fodder, Hara hesitantly replied with “dating”. Of course, you gotta expect the expected, and the MCs basically continued the segment probing and joking about Hara’s dating reputation. The straw on the camel’s back seemed to be Kyuhyun‘s comment when he remarked “If I open my mouth, Hara will be over,” which caused Hara to eventually start crying, creating a palpably awkward atmosphere in the studio. 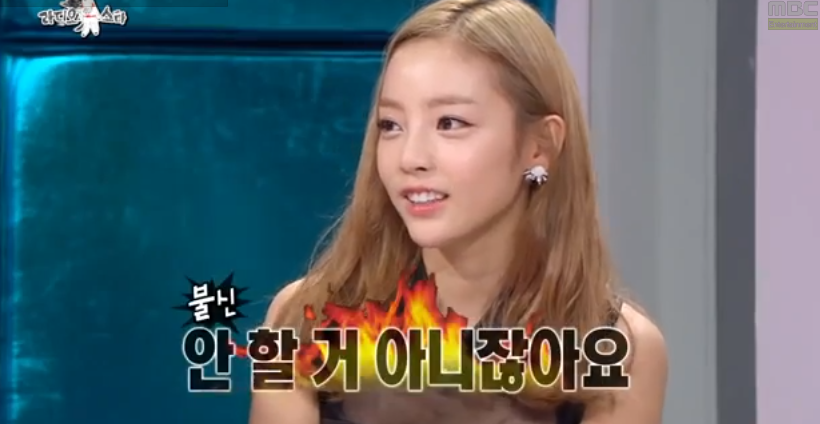 Looking at the turn of events, it’s still kind of dumbfounding that Hara is being put on a stake for this. For one, you’d think in any situation where a group of men rib someone so tirelessly that they end up crying, there’d be a tiny bit of sympathy for the other party, or at least some tongue clicking towards the clowns. For two, Hara only broke up with her boyfriend Junhyung from BEAST four months prior to this. Their relationship was always kept low-key, neither really revealing much about it to the public even when probed. With this knowledge of a recent break up in mind, is it really that shocking to believe Hara might become upset by questions skittering around the topic? If anything, wouldn’t this play out somewhat like a flipped version of the recent Jesse Eisenberg-Romina Puga situation? I’m not saying Kyuhyun deserves  vitriol for this, but wouldn’t convention dictate he and the other MCs be labeled a jerk for taking things a bit too far?

Of course, this is where it seems as though they’re protected, and Hara is damned, by MC immunity. It’s their job to ask the hard hitting questions, to pull the hushed-hushed answers and broach the controversial topics. No one’s even considering putting any heat on Kyuhyun, Yoon Jong-shin, Kim Kuk-jin, and Kim Gura — before anyone can even get a word of criticism towards them in, it’s stopped by “they’re only doing their jobs as MCs.” Or, my favourite: “Radio Star is known for being tough about these kind of things. If you can’t handle it, don’t go on it.” 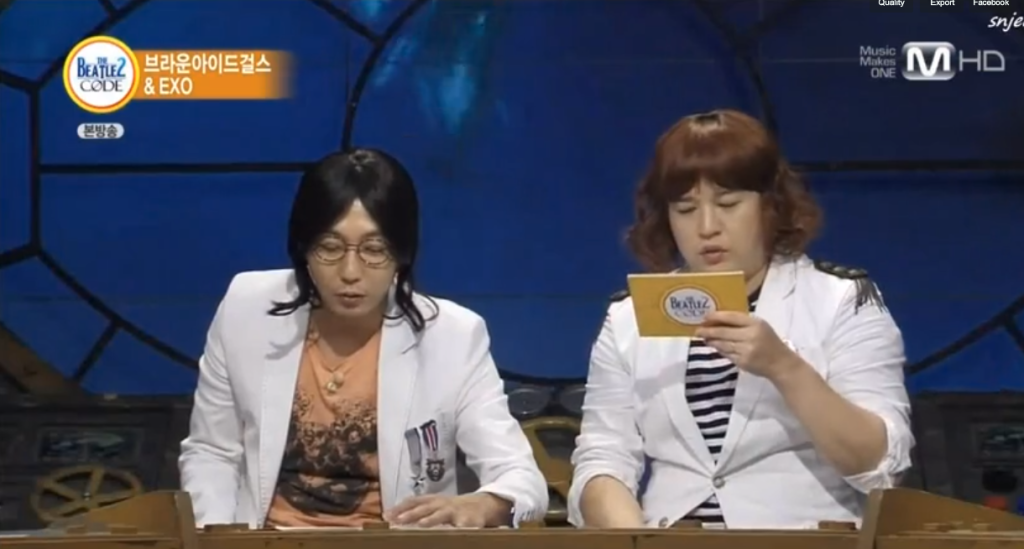 Fact of the matter is, there is essentially no mainstream Korean variety show that’s really hard hitting in any real-life way. Considering how many idols go on Radio Star, it is far from being some kind of utopia when it comes to extracting the raw truth. Radio Star is definitely one of the more enjoyable shows for idols to go on — for the most part, the MCs are familiar with the guests, witty, funny, and it’s comfortable all around. That being said though, it also feeds into a wider culture where it looks like MCs are pretty much given leeway to say whatever they want to their guests because, y’know, MCs gotta MC. This incident with KARA and Hara isn’t a commonality in Radio Star’s case, but it’s not exactly a one-off in terms of the larger scheme of things. After all, just watch one episode of Beatles Code and try not to feel the flitter of temptation to reach through the computer screen and punch one of the MCs in the face. Whether it’s making stabs at Infinite about their sexuality and manly prowess, or rudely dismissing Brown Eyed Girls, there’s always an uncomfortable line being tight-walked but there’s never any articles spewed out about it.

Of course, this can all be tied back to the fact that Korean culture (and many Asian cultures as well) has always had a “tell it to your face” kind of attitude. I’m sure many Asian readers and writers of Seoulbeats, me included, can relate to having old family friends or relatives come up to you and make some kind of comment like “You’ve gained a lot of weight!” or “You’ve gotten a lot darker since I’ve last seen you!”. However, then comes the part where outside of the affronting honesty and lack of tact, there is always a large emphasis on politeness, especially towards elders. That’s where the unfair dichotomy stems from, and why it may be that MCs seem to get away with so much. Even though the MCs aren’t family friends or relatives, there’s always an atmosphere of comfort and friendliness that’s trying to be fostered when it comes to variety shows. 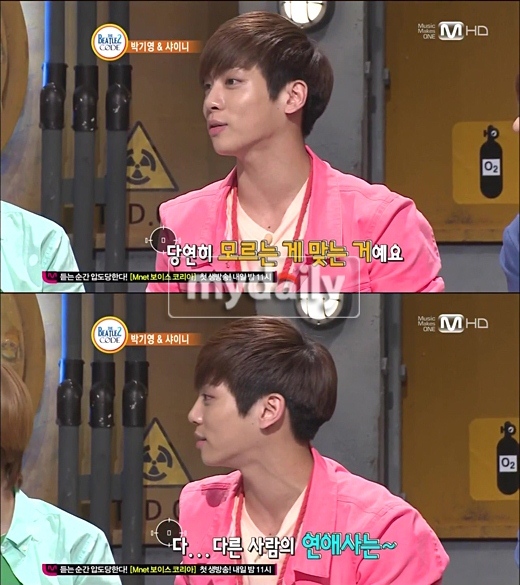 However, the excuse of “culture” only comes so far. If Jia, Fei  and Kan Mi-yeon can all become irritated at Leeteuk‘s jabs at Suzy‘s weight, and if Jonghyun and Kim Tae-won can both mutually agree that there’s pretty much no reason to talk about others’ dating life, then it’s not like it’s “Korean culture” to be rude and invasive. Maybe blunter than usual, but Asians aren’t inherently rude or tactless like so many generalisations like to make it out to be. Not to mention the many cases of guests looking blatantly uncomfortable or affronted by some of the questions asked of them make it apparent they aren’t faced with behaviour like that every day. Unfortunately, all they can really do is smile, nod, and hope a journalist doesn’t screenshot it and write an article about their unpleasant expression.

The thing here is MC-ing isn’t an isolated skill, and a good MC should be malleable and adjust their style for different guests. The constant teasing and probing might work for some guests, but it doesn’t mean it’d work for others. Yoo Jae-suk is a great MC because he’s charismatic, but he also tends to his guests and brings the best out of them. It’s not good enough just to be snarky and call it a day. Likewise, if an MC can take a good go at their guests, then there should be some equality where the guest is able to play off them as well.

Also, let’s be real. The fact that Hara is a female definitely does her no favours when it comes to reception. While male guests do get to play off the MCs and stand on equal ground with them, female guests are expected to laugh at everything that comes their way and take everything in stride. Jonghyun gets to shut down most talk of his dating scandal with a simple “it’s hard to talk about”, while Hara is always bothered about it, and showing any frustration towards the treatment spurs on backlash. Her relationship with Junhyung has always been on the down-low, hardly ever talked about while it was going on unless the MCs would really never let it go, and they avoided flaunting their relationship in public towards cameras. So now that they’ve broken up, why should she suddenly be pressed to air all about it now?

Not to mention, if you watch the video clip, Hara was pretty adamant on laughing it off and making a joke out of until the very end. She also dropped blatant hints that it was difficult to talk about throughout the segment (more like outright stating it in the beginning), and it’s only at the very end that it became too much and she began tearing up a tiny bit. In all honesty, she was taking it as a pretty good sport in the beginning, and it should be an MC’s job to pick up on the fact that she really doesn’t want to continue talking about this and just segway into another question. Instead, it reached a point where Hara became upset, and the audience were angry at how awkward she made it. There are claims she was even more so out of line because she threw a “tantrum” in front of a senior like JYP. This is pretty much ludicrous because, watching the video, she was hardly throwing a tantrum, and at the very least if she was, the MCs and JYP were all getting a huge kick out of it. That was, of course, until she teared up and they realised they may have crossed a line. 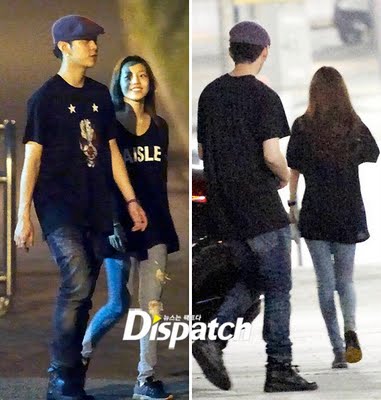 This is the problem with audience reception. They want to know all, but they want idols to be on their best behaviour, and they don’t want to face awkwardness when watching these shows. Even if what the MCs were doing weren’t intrusive, the audience can’t expect MCs to be able to get anything really dirty out of idols without there being some kind of emotion or hesitance. If an idol does talk easily and openly about what’s meant to be a “sensitive subject” then you know for sure that’s scripted.

MC Yoon Jong-shin recently came to Hara’s defense, stating that he pushed her too much. Unfortunately, that didn’t fly, and instead there’s more backlash towards KARA for making the poor innocent MC apologise, along with cries of why didn’t the editor just edit it out?”. My guess is that the PDs of Radio Star are out to air the juiciest bits of their program — no duh — the ones the audience would be most interested in. Hara becoming miffed at dating scandal being brought up would definitely fall under juicy, no? Unfortunately, at the same time, the audience doesn’t want to see idols be anything but pristine-mannered in the face of a sensitive topic. “Why would you make it so hard for us to watch?” they exclaim, while pretty much feeding off celebrity gossip.

Celebrity culture and what’s wrong and right will always be a morally grey area. When someone makes a living off being a public figure, there’s a give-take relationship to be expected. Personally, I don’t think Hara’s dating and personal life is anyone’s business but her’s, especially considering how she went out of her way to prevent it from being the public’s business. At the same time, I can’t fault people for being curious about it. That being said, if you want to get hard-hitting interviews and want to know about these idols’ real life, then you need to be prepared to deal with real emotions. Yeah, they’re celebrities, but they’re also real people. Their life isn’t a show for public consumption, and you can’t expect interesting or scandalous information to be dealt to you with all the prickly frills cut off.  Hara shouldn’t be getting any hate for this. Everyone wants to know about her dating life, so she’s asked about it constantly, and when it gets too much she ends up crying a bit even. That’s a natural order of events. If all of Hara’s detractors don’t want to watch the “awkwardness” that comes from her being prodded and teased about a personal issue, then don’t feed into the demand to know so much about her private life.