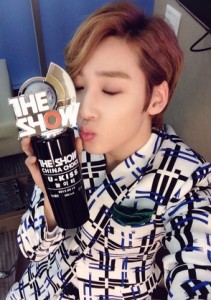 Today marks a historical event for all KissMes. This moment took three full albums, eleven mini-albums (released in South Korea), and over seven years to achieve. The reason for this celebration? U-Kiss finally earned their first music show win on SBS MTV‘s The Show.

This happened through a special episode called the “China Choice,” which was recorded weeks ago. The results were only recently announced. U-Kiss faced strong competition from Infinite H and 4 Minute, but ended up edging out both groups in the end. The grateful members of U-Kiss shared their celebration with fans on Twitter, expressing their deep gratitude for faithful KissMes.

U-Kiss debuted in 2008 with their song “Not Young.” Since then, they have gone through a number of changes, both musically and member-wise. Sub-vocalist Kiseop joined them a year after their debut, but the group parted ways with Kibum and Alexander in 2011. Later that year, rapper AJ and vocalist Hoon became the new additions. However, in 2013, a deterioration in health and desire to leave the idol life is what lead to the departure of their youngest member Dongho. Newest member and maknae Jun was introduced in 2014 during their Mono Scandal promotions. AJ is currently on hiatus from group activities to focus on his studies at Columbia University.

U-Kiss has truly withstood the test of time and patience through endless promotions and a world tour that actually included countries on the Western hemisphere. Winning a music show is a monumental event for groups as it establishes their grounded popularity among the vast sea of idols. We hope that the group will continue succeeding even more after this win. Congratulations, U-Kiss!