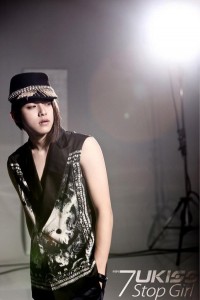 U-Kiss‘ next album, coming later this month, will be without their youngest. Dong-ho will be leaving the group starting the beginning of the next album’s promotions. NH Media cites health concerns and the desire to live as a normal person as reasons for Dong-ho’s departure.

As U-Kiss’ youngest and one of the members recognized earliest by the public, Dong-ho has been the most active of all the members, regularly appearing on variety shows and getting roles in movies. When U-Kiss debuted, he was only 14, so it would be unsurprising if he felt that he missed out on essential parts of growing up and living normally.

Regarding the health concerns, Dong-ho has been injured multiple times in his career. In 2011, he injured his knee while practicing choreography and, later in the year, cracked his tailbone while filming for a movie. In 2012, during promotions for “Stop Girl,” he had to receive surgery for chest pain due to inflammation in the lungs. Earlier in 2013, at a fanmeeting, an air cannon reportedly hit Dong-ho around the waist, leading to another hospital visit. While injury itself isn’t surprising for idols that are always on the move, multiple incidents and potential side effects of surgery to the lungs would be difficult to overcome, especially for the singing profession.

While Dong-ho may not be the most influential member in U-Kiss’ music, he’s been instrumental in getting the group’s name out to the public. The decision to leave U-Kiss, no matter their level of success, must have been a difficult one, and there are nothing but well wishes for his future.

What do you think will be the effect on U-Kiss and their promotions? The group has already survived one set of member changes; will they do okay without their youngest?