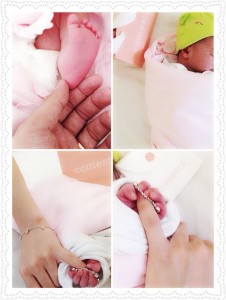 A new Wonder Girl has just made her debut! Today on Twitter, Sunye announced the arrival of her daughter, Hailey, and shared squee-worthy snaps of the addition to her young family.

This is the first child for Sun and her husband, James Park, a Korean-Canadian she met while on a humanitarian trip to Haiti. The couple married in January after two years of dating and announced their pregnancy this past April.

With Wonder Girls on hiatus since November 2012, other members knee-deep in their own activities, and no mention of the band on JYP Entertainment’s 2014 release schedule, the group’s future seems even more uncertain. But if this signals the end for them, then what a joyous conclusion to a great run. Congratulations to Sunye, James, and their family!