After their successful 2013 debut Fly High, Infinite H aims for the stratosphere once more with their mini-album Fly Again. The hip-hop sub-unit brought in more heavy hitters for their sophomore effort, sticking to the slick, smooth style that made them popular last time. With only seven songs, Fly Again reaches another level of excellence, which is expected from such a talented duo.

The intro, “Fly Again,” employs the skills of DJ IT for a trap and dubstep-laced club bopper. This intro definitely gets the party started, even if it’s not the freshest style out there. It may be a bit too intense as an intro, though, since the following track is “Pretty.”

“Pretty” is an upbeat love song about the feelings Hoya and Dongwoo experience when they see this woman who is just so pretty that they can’t seem to function properly when she’s around. They suffer from a deep crush that has them ignoring their ideal type because this new woman exceeds her in looks. While some may cry foul at the superficiality of this kind of song, let’s not pretend that physical appearance plays no role in attraction whatsoever. It’s a cute song about a crush, so where is the crime in admitting you find someone to be ridiculously hot?

Next on the track list is “Go Nowhere,” featuring vocalist Yang Da-il. The influence of ’80s pop is evident here with record scratches and synthesizers building up the background for a bright, throwback sound. It has an energetic beat that continues the fun from the last song. The lyrics are geared towards their love interests, who apparently have been showing jealousy because the guys of Infinite H are popular with other girls. Hoya and Dongwoo promise their lovers that they won’t stray because they’re too infatuated with them to consider cheating.

The next song, called “Bump,” features Ryu Soo-jung of Lovelyz and switches up the mood. It possesses a very breezy, chill vibe with an R&B rhythm. Contrary to the sexy sound, the lyrics speak of the serious conflict Hoya and Dongwoo experienced in their teens as they pursued their dreams to be idols. Hoya raps about how hip-hop essentially awakened him to another world and inspired him in all aspects of life. On the other hand, Dongwoo had his own hardships with the constant pressure to succeed in school despite his passion for dance and rap. Soo-jung’s silky vocals add a light, airy feel in the chorus as she echoes the somber sentiments of Infinite H:

Living day by day, why is it so hard?
I don’t know
That’s life, no matter how hard it is
Just bump against it

We leave the pity party for the after party in “Sorry I’m Busy,” featuring Swings and Champagne. This is definitely something you should blast in surround sound if you enjoy bumping trap beats. For a cypher, it is fairly good. All the rappers manage to keep up with each other, spitting the occasional disses towards their haters. The main message here? “Sorry, we’re too busy making headlines with our music to be caught up in your drama.” They can’t be bothered with trifling issues when they’re busy taking over the hip-hop scene. It’s not an exact quote, but that is the basic gist of their lyrics.

Of course, no album would be complete with at least one track devoted to post-breakup feelings. That is where “Jekyll & Hyde,” featuring Taewan, comes into play. Taewan doesn’t have the same impact that other featuring artists did with his part in the chorus, but he performs well enough for the song. The jazzy vibe takes notes from the New Jack Swing era of the ’90s in some places, which works really nicely for this track. As for the lyrics, the song boils down to going crazy over a recent breakup that has Infinite H switching personalities as a coping mechanism. It’s nothing too fancy, but it’s a decent breakup song if you’re in that drinking-wine-alone-in-the-bathtub mood. 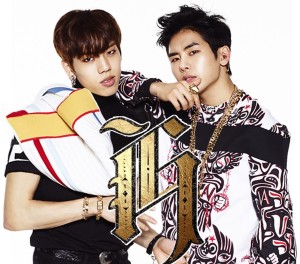 Now, about this last song called “You Must Be Crazy” with Sanchez of Phantom — things get real here. The breakup apparently happened because their lovers were caught cheating. Who would ever cheat on Infinite H?! The title makes sense to me, but others are allowed to think differently. The trap beat is mid-tempo, aiding in the inner conflict our duo feels as they come to grips with the reality of a bad girlfriend. Hoya expresses his disgust at her actions in his verses:

Don’t misunderstand, you’re not a bad girl
You’re a dirty girl
Give those habits to a dog in a doghouse

That’s a small sample, but I highly recommend looking up the full lyrics because it’s really clever wordplay with puns. Hard to see that in English, but if you read the Hangul it is poetic justice.

It’s too early to say if Fly Again will top any lists for Best Mini-Album, but for a sophomore production, they did well. My main criticism would be that it plays things a little too safe since some beats felt repetitive throughout the album. I did appreciate “Not Going Anywhere” and “Jekyll & Hyde” for reviving that old school sound, though. What probably stood out the best were the lyrics, which continues to be the strength of Infinite H as a duo. Not sure anyone would disagree with their songwriting abilities, but again, everyone is allowed to differ in opinion. Overall, this album did not disappoint and was well-produced.

How did you feel about Fly Again? Did you have any favorite songs? Comment down below!