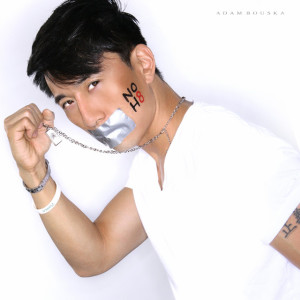 The world at large has been blanketed in a great deal of ugliness this year—from overt and aggressive racism, to rampant genocide. The world of K-pop has also been dealt heavy blows, very little of which has to do with the music. In the wake of all this sadness and inexplicable hatred, there’s at least been one small step for progress and equality. In countries such as Japan, France, England, and an increasing number of states in the US, we’ve seen the fight for marriage equality begin to prevail. One can only wonder if it will ever reach South Korea.

There are a few K-idols who, despite the sometimes cruel words and actions of the country’s more conservative, traditional citizenry, have been open about their opinions and connections to those in SK’s growing LGBT community. These are artists I’d love to see supporting the NOH8 Campaign.

The NOH8 initiative was a response to Proposition 8, an amendment to California’s state Constitution banning same-sex marriage. Began in 2008, the grassroots campaign is a form of silent protest. With the help of celebrity photographer Adam Bouska, people from all walks of life—teachers, religious leaders, students, and artists of all kinds—have shown solidarity, rallying for marriage equality. Celebrities such as Margaret Cho, Lisa Ling, Mel B., Slash, George Takei, and Korean-American actor James Kyson have all posed for this initiative along with nearly 33,000 others. I think it’s time some of the biggest names in South Korea’s entertainment industry—particularly their idols—add their presence to the list of celebrities worldwide.

Junsu answered questions concerning the image he revealed for his first solo album Tarantallegra, a hyper-androgynous persona that was probably a product of his work as the sexually fluid character of Death in Elisabeth. In his interview with 10Asia+ Star Magazine, Junsu discussed international fans’ reaction to the revelation of his more feminine alter-ego in the music video and subsequent performances of the hit song:

Frankly, I heard that a lot of overseas fans still don’t know that I was the main character in “TARANTALLEGRA” because of this style, and they reacted, “He is cool but is he gay?” (laugh). I am not gay, but on the other side, I feel good when hearing comments like that. Doesn’t matter whether I am actually gay or not, being able to show a diverse image to the public is absolutely a big plus for an artist. 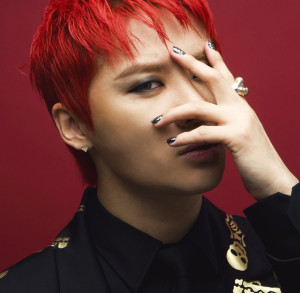 All three are friends with Hong Suk-chun (a.k.a. Tony Hong)—though admittedly, Jaejoong appears to be much closer to the industry veteran. Tony is an actor, restaurateur, and former broadcaster who caused quite a stir in South Korea in 2000 when he came out as homosexual. He suffered a considerable blow to his career with the confession, but he’s worked hard to regain not only his popularity but his position in the entertainment industry. His friendship with Jaejoong is well known and has resulted in not only hilarious pictures between the two and their group of friends, but in their working together. Most recently, Tony was casted alongside Jaejoong in his latest drama Triangle, and fans were gifted with a glut of behind-the-scenes photos from the set.

In 2011, the group was appointed as Regional Goodwill Ambassadors for UNAIDS, a foundation whose purpose is to spread awareness about HIV/AIDS prevention and education. Said Jaejoong, “Knowledge and awareness can help people protect themselves and break down stigma and discrimination.” Their dedication to helping those who constantly live with discrimination points to a mature and accepting disposition that exemplifies the NOH8 Campaign’s main objective, and the truth of their situation regarding South Korean television means they have the freedom to take part in causes that many idols may find too controversial and therefore too risky to their careers.

Most definitely one of K-pop’s most outspoken idols, Heechul has openly expressed the fluidity of his own sexual identity. Whether for show or otherwise, his (convincing) drag performances at concerts and his very ostentatious show of affection for his bandmates certainly proves his lack of timidity. All skinship and fun aside, he’s shown himself to be very supportive of the right for all people to be allowed to marry no matter gender/gender identity. He expressed his thoughts on the very public wedding of well-respected director Kim Jho Kwang-soo, who officially married his long-time boyfriend Kim Seong-hwan last year. 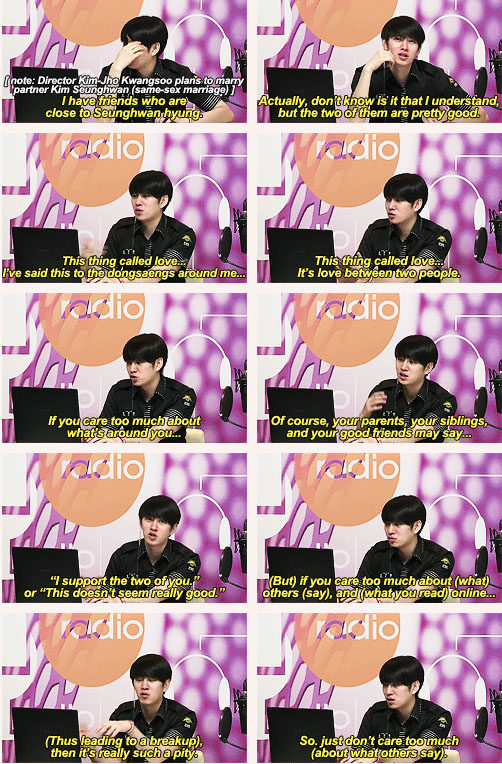 Amber has always stuck out in the K-pop scene. People have gone as far as to call her a “tomboy,” but the reality is she’s simply a girl who knows what she likes and is in control of her own self image. Her message is simply that girls can dress however they like and be whoever they want to be. After all, how we dress doesn’t define our worth or ability any more than our ethnicity or sexual orientation. Born in Los Angeles, Amber was active in sports and had a particularly keen fondness for skateboarding. Obviously skirts and high heels aren’t ideal for playing baseball or completing a 360 on a half-pipe. She’s always erred on the side of comfort rather than societal expectation. Her positivity and how she carries herself meshes perfectly with NOH8’s message of equality without fear of persecution.

SHINee’s Jonghyun has always been incredibly outspoken regarding his opinions and political views—from his comments about how to properly vindicate the remaining living women who were sold into sexual slavery between 1932 and 1945 (known as “Comfort Women”), to his support  of trans-bisexual Sungkonghoe University student, Kim Eun-ha. Eun-ha created a poster expressing her outrage with the disgusting display of hatred against Kim Jho Kwang-soo’s marriage:

I am not okay, not at peace at any moment, whichever name I am being called. Today’s Korean society not only can’t enact an anti-discrimination law, but discriminates against sexual minorities on a daily basis, throws rampant unfair criticism and hatred towards females, exploits the young generation, forces college students to be absorbed with employment instead of academics. Which name should I be called in order to be at ease?

Jonghyun took to Twitter to comfort and support the young woman, thanking her for her stance against discrimination, saying, “I support you for speaking out that different doesn’t mean wrong.”

He fearlessly supports the LGBT youth of his country. I have no doubts the NOH8 Campaign is one he’d readily support.

However, no idol in my mind exemplifies the NOH8 Campaign’s fight for equality more than 2AM’s Jo Kwon. In fact, he would be at the very top of my list. Not only does he generally blur the line between gender identities, he does so in a way that’s both humorous and incredibly classy. He’s been known to exhibit his proficiency of executing the choreography of his female peers—Brown Eyed Girls’ “Abracadabra” and Miss A’s “Goodbye Baby,” for instance. Most recently, he’s taken on a role that I never would’ve imagined any idol attempting, no matter how (company-forced) sexually ambiguous they are.

In April, Jo Kwon signed up to portray Adam (drag name Felicia) in the cult classic Priscilla: Queen of the Desert. It’s unsurprising that the flamboyant K-pop star has fallen victim to the hatred and open bigotry of more conservative Korean naysayers—who are not wont to actually see the show, but degrade it for its positive portrayal of homosexual men and drag culture. However, he’s taken the criticism with pride and walked onto the stage with fearlessness and grace.

Jo Kwon released a statement on his Instagram, expressing his sadness at the blatant disrespect he and the show has gotten. But he also implores those who would rashly pan the musical to come and see the show and experience the positivity of its message without prejudice or pretense:

If this doesn’t prove that he should be the first of the idol community to pose for a NOH8 photo, I don’t know what does.

For a country whose pop culture uses hypersexuality and sexual fluidity as marketing strategies, the mindset that homosexuality is something to be ashamed of pervades the culture. Some have managed to rise above the hatred, such as trans model/actress Harisu, who’s become an icon for the LGBT  community. However, for many more their sexual freedom comes at a tragic price, as in the very heartbreaking case of actor Kim Ji-hoo, whose suffering from the hatred he received when he came out resulted in his suicide in 2008. 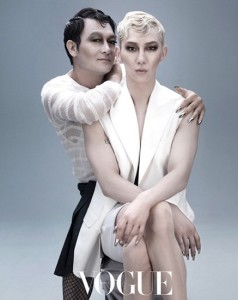 South Korea isn’t exempt from the ugliness of the world, though the bright lights and glitter of K-pop can and often do blind fans to that fact. It’s time there was support for those youths who are confused about their sexuality and have nowhere to turn to, no one to connect to when the idols they consider role models use drag and skinship to sell their records but openly display their disgust at the idea of two men loving each other. With this initiative, it would be a chance for the most visible faces in SK’s pop culture to rally behind those without a voice and start South Korea on the path of becoming a country that lives up to its desire to continue to progress.