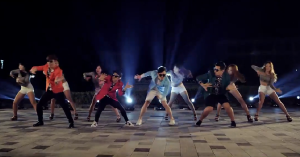 It has been a long while since Ulala Session has released music. Aside from some OST tracks and their stint on Immortal Song 2, the group has not put forth much since the passing of their leader Lim Yoon-taek. This time around, the group has filmed an energetic dance pop number in the Chungjang part of Gwangju. “You & Me” will serve as the main theme for the Chungjang Festival. This street culture festival is held for five days during October, and this year, the theme has the area trying to emulate the 1970s and 1980s. The song and MV are both upbeat affairs with the men of Ulala Session bringing their usual character and humor on screen.

The song starts off with the sounds of clapping over a guitar riff. The guys bring a lighthearted energy while telling an interesting story. The song practically jumps along with the guys and has a catchy crooning chorus that begs to be sung along with. “You & Me” does end up feeling repetitive halfway through. The rhythm remains fairly stagnant throughout the song. It does attempt to chop up the chorus a bit towards the end, but the reliance on the refrain “you and me” becomes stale quickly. I do like how the lyrics describe an average type of person who should be confident even if they believe they are not the ideal looking person.

As noted before, the video was filmed in Chungjang. It features a mixture of dance scenes and a short side story where the guys attempt to court a girl with their different charms. I wished that there were more distinctive features of the environment. The members were dancing around store fronts and in the middle of the street, but I didn’t get a great impression of what differentiates Chungjang. The only real attention grabbing scenery was the alleyway; the art on the walls were a colorful touch and would be something cool to walk by and enjoy. 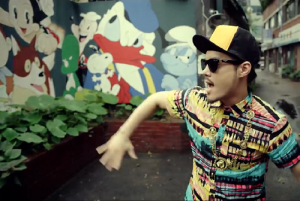 Another strong element in the MV is the atmosphere. The song and dance is infectious. Even if the song is too repetitive, that is forgivable since the guys make the experience feel entertaining and alive. They are literally hopping around in the middle of the street shouting “you and me” in an attempt to catch the attention of someone they want to attend the festival with. It is actually quite clever that they would utilize this song as an easy way to invite someone to go out with you.

The alleyway scenes involve the members trying to ask a girl out. One by one they use bodily charms, wrist grabbing (why is this a thing?), a bouquet of roses, and a nervous letter — all to no avail. These parts are great because they show off the personalities of each of these four guys. They aren’t afraid of acting foolish or being over the top.

Also, there does seem to be a slight lyrical nod towards Psy’s “Gangnam Style.” There were some comments that accused the boys of borrowing from Psy’s song and video. The lyrics mention “Oppan Chungjang style,” altering the main titular line from Psy’s viral hit to fit the location. The MV does share some stylistic details as well like the major dance scenes. However, I think these similarities do not justify the video as a parody. Ulala Session has never been afraid to be a little different in their personalities. They also enjoy featuring big group dance scenes, so I think the comparison and claims of it being a parody to “Gangnam Style” do not hold much weight aside from the one lyrical mention.

All in all, “You & Me” works on many different levels. It is a pop song that will function as a great theme for the Chungjang festival. The idea behind the inviting someone to go out is perfect for the large event. My main gripe with the song is that it’ll get stale because of the incessant “you and me” chants. Also another slight issue I had is that I wish it would have given the audience a more definite ending. The ending of their attempts at getting the girl did not feel all that conclusive. However, Ulala Session is back and their optimistic point of view is always an amusing beacon in the K-pop sea.