Last Monday, the 11th of February, brought the sad news of Lim Yoon-taek‘s passing. As many of you may have read or heard, Lim Yoon-taek was the leader of the self-made group and Mnet Superstar K3 winner, Ulala Session. In a season dominated by groups, Lim lead Ulala Session to victory while also suffering from stomach cancer, or gastric cancer, which was the cause of his death. He was 32. 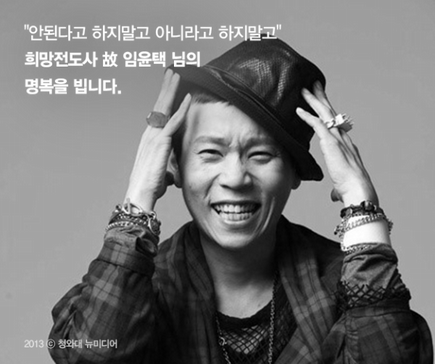 Lim was a popular man — many celebrities, including Tablo, Tiger JK and Psy (who also paid for Lim’s Valentine’s Day funeral), offered their condolences; with even the Blue House tweeted an obituary message (see image above). As saddening as the news is, it was not unexpected: it was widespread knowledge that Lim had stage 4 stomach cancer, a fact that caught the attention of many when Ulala Session appeared on SSK3. And as inspiring as it was to see Lim and his band break through and win the show, it was only natural to feel some level of skepticism regarding Lim’s prognosis being used for publicise the band (and thus the show) and the way it affected one’s perception of Ulala Session. However, this is the nature of reality television, wherein a narrative is required to sell a product. And for the staff on SSK3, Lim’s battle with cancer and his determination to continue living was the perfect story to feed an audience who, whether they knew it or not, were looking for an emotional pull in addition to being enthralled by undiscovered talent. 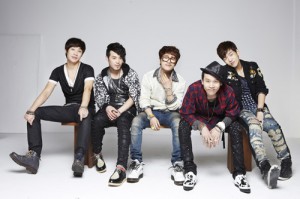 A number of netizens seemed to take their skepticism to extreme levels, though, and their attacks on Lim were vicious. As Seoulbeats has previously explained, Lim even brought his doctor on television in an attempt to dispel rumours, but, as with the case of Tablo, it had little effect. The rumours continued and still continue, even after his death, with even an online forum on Korean website Daily Best (not to be confused with American site Daily Beast) dedicated to mocking Lim’s death popping up and being derided by the larger Korean public.

That there is even controversy over such a matter is bewildering, but it cannot be denied that Lim is as famous for his illness as he is for his group and music… if not more. So for this spotlight, I’d like to forget about Lim Yoon-taek the cancer patient for a while and instead take some time to celebrate Lim Yoon-taek the musician and performer.

Ulala Session was formed on a love for dance shared by Lim, Goon Jo, Kim Myung-hoon, Park Seung-il and maknae Park Kwang-sun, with the cluster of individual friendships, dance student-teacher relationships and mutual admiration coming together to form the five-piece. They lived a mostly anonymous existence, performing in small venues and opening for other artists. Lim was the glue that kept the group together and active during this time as a strict leader, always making sure they practised and didn’t waver from their shared path. And it was Lim who registered Ulala Session to attend the auditions for SSK3, which would be accepting group acts for the first time in the show’s history.

The other members were wary of involving themselves in an audition program, but bolstered by the thought of winning the competition and the accompanying prize money — which would help pay for Lim’s treatment — Ulala Session went to the audition. Dancer Goon Jo didn’t participate, but the remaining four members powered through a JYP mash-up of songs “Honey” and “Kiss Me” with a Lim-led dance break at the end.

Though they were older than your average rook boy band, the judges were definitely impressed by their talent and energy, and soon enough Ulala Session found themselves in the show’s Final 11. There, their popularity endured, gaining the most votes right from the first round, thus granting them immunity from elimination for the first three rounds.

One of their performances was an entertaining rendition of another JYP song, “Swing Baby.” While JYP’s version is just as energetic, Ulala Session infused comedy for a very engaging and more accessible performance.

As lofty as their dream of taking out first place may have seemed to the members at the time of auditioning, they ended up doing just that, beating out Busker Busker for the top prize. In addition to winning the cash prize, Ulala Session were also offered the opportunity to perform at the 2011 MAMAs, owned by Mnet. Ulala Session’s medley performance was one of the best of the night thanks to the crazy colours and abundant energy on stage.

After working on their first mini-album Ulala Sensation Part 1, the group made their debut in the May 2012 with the Psy-produced “Beautiful Night.” The kaleidascope of colours and brisk moves, now recognised as Ulala Session trademarks, along with the song, were well received by music lovers and quickly topped the charts. Below is their performance from Arirang‘s Simply K-pop.

Part 2 of Ulala Sensation was released a week after with title track “Nothing’s Left,” and during the group’s hiatus, Lim surprised many by marrying in July and having a daughter soon after; she celebrated her 100 day ceremony this January.

Lim Yoon-taek was a driving force behind Ulala Session’s success and the instigator of their leap into the professional music scene — and though his battle with cancer led many to sympathise with and support him, Lim’s and Ulala Session’s success can be attributed more to their skill, vision and, especially, passion. And though there is now the relief that Lim is no longer suffering and is free of his ailments, he will be, nonetheless, sorely missed. We at Seoulbeats offer our deepest condolences to Lim Yoon-taek’s family, band members and friends.

Readers, what are your thoughts on Lim Yoon-taek and Ulala Session? Do you have any favourite songs, performances and/or moments? Mine has to be their signature “U-La-La-La” move; please tell us yours as well! 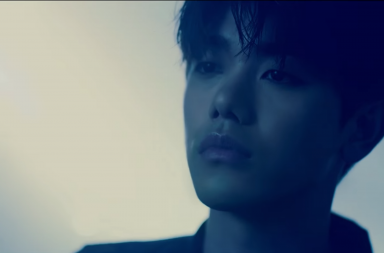