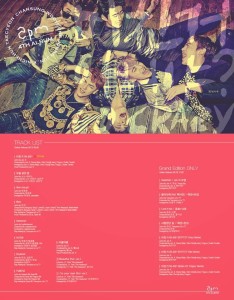 It’s been a while since 2pm as been spotted as a group in the K-pop sphere, with their last comeback being as long as 15 months ago. Initially supposed to return during the start of summer, the group decided to postpone their comeback in order for the individual members to focus on their own activities. In any case, JYP has finally dropped teaser images and videos, with a release date to boot.

Go Crazy is their fourth full-length album, with ten new songs as well as Korean remakes of some of their Japanese releases. Jun.K, Chan-sung, and Taec-yeon all contributed to the normal edition production in their own ways, while all members contributed to tracks in the grand edition. Jun.K penned and arranged the title track “Go Crazy”. The MV is set to release on the 10th, with the album dropping on the 15th.

With the teasers released, it seems that 2pm is returning to their “Hands up” era, with a high-energy party anthem. The members party all night, only to suffer from a hangover the very next day. Cue flying over moons and bleating goats. Seems like it’s going to be a fun one.

Are you guys excited for 2pm’s comeback?