VIXX Are Stuck In "Eternity" 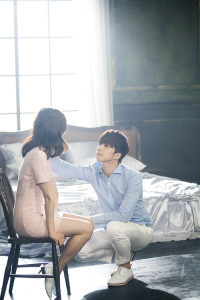 There is two things VIXX are known for: their dark concepts and their powerful stage performances. While the first of these is what makes VIXX stand out in the crowded field of idols, it’s also a weak point for casual listeners. In fact, one of the biggest criticisms is that VIXX aren’t able to bring the maturity and stunning visuals of their dark concepts (“On and On,” “Hyde” and “Voodoo Doll”) to their lighter concepts (“Super Hero,” “Rock Ur Body” and “G.R.8.U”). Another criticism is that the first idol group from Jellyfish Entertainment is stuck in a box; the dark concepts have defined VIXX and these dark concepts also scare potential fans away due to their intensity and possible triggering images. With such a state, it would be almost impossible for VIXX to expand out of their niche and reach into the general public.

This all changes with “Eternity.”

Did they deliver? Yes, but not in the way one would expect. With a VIXX song, there is an expectation of a certain kind of grandiose and gothic loudness, which was absent in “Eternity.” It felt like a VIXX song despite using a different formula of having a booming chorus, it looked like a VIXX MV, it read like a VIXX song, but there was certain friendliness about it that was absent in the very intense “Voodoo Doll” and “Hyde.”

Having won their first music show win with “Voodoo Doll,” it’s understandable that VIXX are now getting their name out to the general public. Leo is just finished starring in a musical and just filmed an appearance on Running Man, they have their first CF deal with Tio Iced Tea, and Hongbin and N have been cast in supporting roles in dramas; a far cry from their small beginnings. To hold this interest, it was crucial for them to follow up with a song that would appeal to the casual listeners while having an intriguing enough MV to make these casual viewers want to see more.

As with most VIXX MVs since 2013, the visuals are stunning and the color palette is suitable to the needs of the song, matching the ambience set up in a perfect manner without washing the boys out and giving this a sense of subtle magnificence. Since “Hyde,” the boys have been acting in their MV and while some had some rocky starts, particularly Ken, some members portrayed their roles so well that it seemed natural, such as Hyuk. And their progress shows with “Eternity” as there is more ease in the expressions portrayed and believability.

The music video can be split into three parts: the dance parts, the solo and group shots, and the story line – all very simple and commonplace. Unlike their previous dark concepts which pushed the borders considering they’re idols, this MV was very safe and they shouldn’t have any problems with regulations. 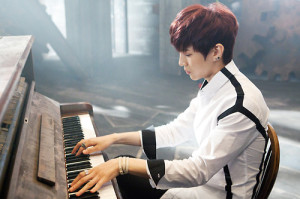 The boys are all in various situations where they are spending time with their beloved. There are smiles and some skinship – N wakes his girl up and gives her some coffee, Ravi is dancing the afternoon away with her, Hyuk is doing some aegyo and sitting with her by the window, Ken is sketching her, Leo is playing the piano for her and Hongbin is singing her a song – all done with the lighter tones in the MV, indicating that these are happy memories.

But with such a haunting instrumental and ambiance, plus Ravi’s opening English line of “Look, love is a nightmare. Time’s over,” we knew this wasn’t going to last long. While in the midst of their happy times, the female suddenly disappears in light smoke and the members are left wondering where she’s gone and what to do. N, in a haze of emotion, goes back to sleep – the very position he was at the beginning of the MV.

This leaves me to believe that all that was just a dream and the moment they started waking up was when the female left in smoke. This explains why the female is mostly immobile – N has to make her grasp the mug, Ravi is the one leading the dance, and why she is sitting down for Leo and Hongbin’s scenarios. The most voluntary movement we get from her is during Hyuk’s scenes and even then they end up in a stationary position where Hyuk is doing most of the talking. This is all supported by the lyrics, which brings the MV into context and gives the MV a new different angle.

I had a very frightening and scary dream

You won’t have the chance to loose me 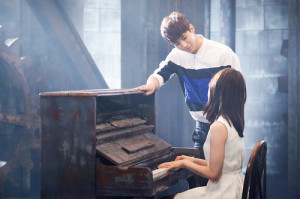 An interesting thing in this MV is the focus on all the clocks. Not only does this connect to the lyrics of “Voodoo Doll,” it also gives us a sense of time experienced by the boys. In the beginning, all clocks are at 1:43 then it suddenly fast forwards to 6:20 and the female disappears. 6:20 is an important time for VIXX after all since VI is 6 and XX is 20 and VIXX is all about those connections.

When one is dreaming, one normally doesn’t feel like the time is passing and it literally feels like eternity at times, as if one has been asleep forever. But once the time to wake up comes, the dream ends abruptly and such is the case of VIXX. It is only in dreams that they could continue their love until eternity, but even then, they’d have to wake up and face the reality that she is gone from their grasp. The only way to make it last until eternity is to never wake up and to continue living in this dream that becomes a nightmare. And as seen in the last scene and the last lines, they only know of one way to do this.

While I do feel as if the ‘Oooooh’ part needed to come sooner to give a little ‘oomph’ and power that was missing in the chorus, I understand that this was done on purpose to further the feeling of anguish, angst and feeling of being lost that they are feeling and these emotions are portrayed in the MV. Despite all this, the translation of the lyrics and feel of the song to the MV was suburb and gets a full point from me.

But what really threw me off is that Ravi, good ol’ reliable Kim Wonshik, didn’t scream his name before his rap or that his rap didn’t come out of nowhere. No, instead, he whispered his name and then proceeded to rap in a manner almost similar to his rap in “Only U” except with a little bit more desperation and a little less melancholy.

But there’s something Ravi did deliver in terms of expectations: his fashion was out of sync with VIXX when they weren’t wearing suits. May he continue being the fashion terrorist-slash-prince that he is. In case no one knows, Ravi is a major bias of mine, second only to a certain Cha Hakyeon, so I say this out of love-hate for his studded Vans in the teaser pictures (please, never again), his weird blue hair that looks good at certain angles and lighting and styles, and those funky shoes he wears in his dream scenario (look closely at those shoes). May Ravi continue being the VIXX member with the weird outfits and Ravi can make it up with his fabulous body rolls and fantastic lyrics, which will be discussed further in the album review.

VIXX always delivers in the dance department and this is no exception. Like their previous singles, this is surely choreographed by Nana School and taught to them by their dance teacher since their trainee days, Yang Wook. One thing unique with VIXX is that their dance reflects the song without being gaudy and does it while recalling other moves in previous hits, and this is no exemption.

Before I get to that specific moment, the grand finale of “Eternity,” let’s get this out of the way: those body rolls. How did they even fit it in during a sad song – they must have taken tips from Rain. Not that anyone’s complaining but please someone has to stop Lee Jaehwan before he hurts himself. Just like how I am continually trying to see if Myungsoo will slip in the last move of Infinite’s “Last Romeo,” I know for sure that Ken is going to slip during the move at 2:13 and fall flat on his face at one point or another. There’s a reason he was put in the back. Frankly, it was surprising that Leo was put in the front but his knee game is probably strong. 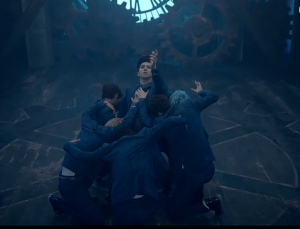 But what really stood out and is memorable was that parting shot – Ken’s burial with the accompanying music. When doing a dark concept, VIXX always kills someone on stage, sacrificing that member to the K-pop gods so that their make-up stays intact even while crying or sweating buckets. In this promotional cycle, not only does Ken get killed, he gets a burial at the very end. Don’t worry; it won’t last since he’ll be resurrected in “Voodoo Doll.”

This brings us back to the continuity that VIXX has. The parting shot could mean two things. One, this is the end of this cursed relationship and VIXX will bring us a new narrative. Or two, as the time travelers that they are, they then resurrect Ken in “Voodoo Doll” bringing about that stage in the cursed relationship.

There is one question left hanging no matter how many times one watches the MV: does the female leave them or did she die? Because it is left to speculation, it leaves me to think that the female did leave them since it’s the narrative already established since “On and On.” I think that in the Cursed Relationship timeline I had elaborated on before, this takes place sometime after “Hyde.” The members are remembering their happier days but because of the very difficult relationship they have, she has left them and this time for good. Not knowing what else to do, the VIXX members have arrived to the kind of situation presented in the MV. This then leads us to “Voodoo Doll” which is their resurrection to become the previous lover that fights for her happiness at the expense of their well-being.

With a full point for their dance, the lyrics-to-MV translation, cinematography and the sheer charisma of the members in this MV, “Eternity” easily earns a 4.5/5.

What did you readers think? Yay or nay for “Eternity?” Or are you, like me, waiting for the live performances?