Remember “2Hot?” I still consider it to be one of the lowest points in G.Na‘s K-pop career, with its brash sound, sleazy characters, lewd camera shots and garish colour scheme. It seemed like a miracle when Cube Entertainment got half a brain and gave their original female soloist the breezy “Oops.” It was fresh, feminine and subtle, and most importantly, it wasn’t cheap.

Cube continues on from “Oops” in the MV for “G.Na’s Secret,” presenting to us another light, airy ditty set in a world of pastels. Unfortunately, though, the company has also brought in some of the sleaze that I thought we’d left behind.

The MV is a straightforward affair: G.Na falls head over heels for Ryohei Otani (who was most recently seen in Gu Family Book), an appropriate response when presented with a handsome face like Ryohei’s. She’s shy at first; but when presented with a party invite, G.Na seizes the opportunity to win get closer to her man, and promptly hits the shops. 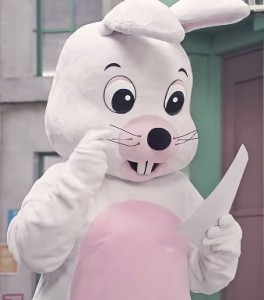 Before I go any further, I do feel the need to point out that the invites (or flyers, rather) in question G.Na’s name on them — that is to say, she receives an invitation to her own party and doesn’t at all seem like she was expecting it. “Oh, I’m throwing a party? Yaaaaay!” is generally not the kind of thing I expect to hear a host to be saying, and considering all those horror stories of parties gone wild that keep popping up in the news, neither would I like to hear such a proclamation.

As for the rabbit, I have absolutely no idea what’s going on with that. If I were to hazard a guess, I’d imagine they were maybe a surprise party planner with a reputation for whimsy: you book them to plan a wild party without your knowledge — because your own friends are too busy spending every single second of their time on either side of you —  and they go about the whole thing dressed as a woodland creature. Or maybe they’re just a furry fan — which is cool too, no judging here.

What I am judging, though, are Kim Min-kyo‘s career choices. After more than 15 years in the acting industry, we are finally seeing his star rise;  and while his addition to the SNL Korea cast in 2012 was the impetus for this, he really should consider laying off the pervert roles outside of skits and digital shorts, or risk being typecast.

If the scenes of G.Na being perved on were meant to be funny, that didn’t translate. And, to be honest, I don’t think the intention was humour at all. In its quest in trying to decide just what the hell it wants to do with G.Na, Cube has apparently decided to go in the innocent direction. “Oops” had shades of this innocence, but also featured G.Na in racier tight clothing typical of a sexy concept and a more mature personality.

Considering G.Na is known for having a great body and — because we like to judge people’s sexuality based on their physical appearance — a sexy image, Cube also seemed to realise that they couldn’t abandon a sexy image completely. But how to have G.Na be innocent and sexy at the same time? Countless K-pop videos featuring girl groups have shown the myriad ways in which this is possible, but Cube here has eschewed that and gone for a cheap and creepy tactic. 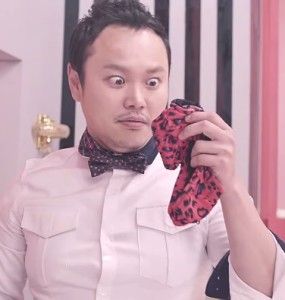 Because G.Na is meant to be innocent in this MV, she cannot be aware of her sexuality. Normally, the camera, choreography and outfits bring our attention to female idols’ bodies while they continue on seemingly oblivious to what’s going on. But, as mentioned, this is normal. If one wishes to stand out, one has to try something different — and the pervert character is what Cube decided would be different, by kicking things up a notch. Maybe also because G.Na is older, Cube could have felt that this was somehow age-appropriate as well.

While I don’t think this was the best way to go about  things, there is no doubt that this MV needed a point of difference. As a song, this is your average sweet bubble-pop track — this could have possibly even been an A Pink b-side. It’s a disappointing composition from Duble Sidekick. Sure, lyrics about buying lingerie may sound too risque for the typical girl group, it is only mentioned in the first couple of lines and the song title’s cute play on Vicoria’s Secret isn’t enough to compensate. The MV obviously attempts to have lingerie play a bigger part, probably so that the concept can be justified, but that ends up going awry with me. All I remember are the pair of undies that end up in Min-kyo’s pocket.

At this point, I don’t care how the MV ends, and you probably don’t either — but, for the sake of consistency, allow me to inform you that G.Na escapes the clothing store unscathed and with a new dress. She wears it to her party and ends up playing hide and seek with a suited-up Ryohei’ the MV ends with a painful display of cutesiness from G.Na. On paper, it shouldn’t be too different in tone from “Oops!,” but while that is a breezy and fresh experience, “G.Na’s Secret” ends up being much more generic — and when it isn’t generic, it’s creepy. 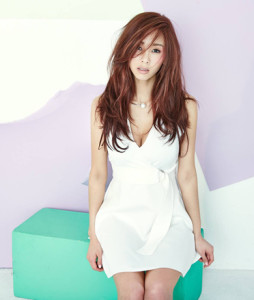 With the hopes of seeing a better G.Na production next time around, I give the song a 2 out of 5 and the MV a 1 out of 5.

What did you think of “G.Na’s Secret,” readers? Were you bothered by Kim Min-kyo’s character? And do you think those mannequins were actually real people? Because they looked like it.

The Highs and Lows of G.NA’s Rollercoaster Career