The Highs and Lows of G.NA's Rollercoaster Career 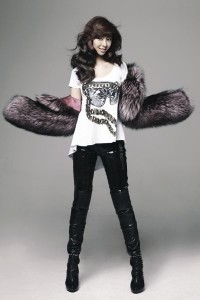 G.NA: the talented and delightful soloist under Cube Entertainment. As she recently released her latest single, G.NA’s Secret, it’s good to take a look at her 4 year stint in K-pop. Never quite able to maintain and capitalize on her biggest hit, “Black and White,” with fluctuating sales and concepts, G.NA has had quite a rollercoaster of a career.

Before her solo debut, G.NA was set to debut with the group Five Girls. She would have been the leader, and joined by other now-popular girls. However, in 2007, they suddenly disbanded before the group could actually debut. As a result, she became a trainee at Cube Entertainment.

Prior to making her official debut in 2010, G.NA released a duet with the legendary Rain, “Things I Want to Do When I Have a Lover.” Granted, this was not a very good song, especially with its overuse of the word “boo.” But, it got enough attention for people to notice her. In the same month, Draw G’s First Breath was released and G.NA became a winner. G.NA was able to showcase the nice vocals she offered, with her title track, “I’ll Back Off So You Can Live.” Cube was also smart in banking on the popularity of B2ST. The track featured Jun Hyung as a rapper, and even had Doo Joon in the MV. She ranked high on Gaon Charts and scored her first victory on a music program. This was impressive for a rookie, and set her up for even greater success.

Black & White is likely the hallmark of G.NA’s career – which is regrettable since it came out in 2011. With a MV featuring Jin Woon of 2AM, the track was a dance song with repetitive lyrics. In K-pop, that’s gold, even if those lyrics make the girl sound a bit desperate. It also better showed that G.NA has dance skills. The track reached the top of the charts and the album did well, too.

Perhaps it was this switch to dance tracks that showed such skill that led to the stream of tracks since “Black & White.” Once again, the dance tracks with repetitive lyrics returned. However, only her next two title tracks, “Top Girl” (2011, Top Girl EP) and “2HOT” (2012, Bloom EP) would even come close to the same success. These two tracks showed a shift for G.NA: completely confident in her looks. Both “Top Girl” and “2HOT” were anthems oh how hot G.NA felt. Well, can’t really blame her for that, since her looks are important to her image and she’s known for being gorgeous.

The Bloom and Top Girl EPs would also somewhat match the success of Black & White. Both charted in the top 10 on Gaon. Even more impressively, four other tracks from Bloom charted as singles. For the track “Green Light” we also saw a reunion of sorts of G.NA and Jay Park. Prior to debut, G.NA actually featured in 2PM’s MV for “10 Out of 10.”

In 2013, G.NA made a comeback with Beautiful Kisses. The title track “Oops!” was aptly named. While a nice song, it was so biased, line-wise, toward BtoB’s Ilhoon, that it appeared that it was more of his song than hers. This didn’t sit well with fans. Although the MV was weirdly cute, the track did not make it into the top 10 on the charts. Perhaps to make up for this, Cube also released the MV for “Mind-Sync” featuring Huh Gak. The track itself charted, and once again, we got to hear G.NA’s great voice.

It remains to be seen if G.NA’s latest release will signal a rise or fall in her career. It’s a question in what direction fans would like to see G.NA go in: sexy or sweet, ballad or dance.

Overall, Cube has not seemed to invest as much effort into branding and promoting G.NA, to provide a clear choice for G.NA’s direction. 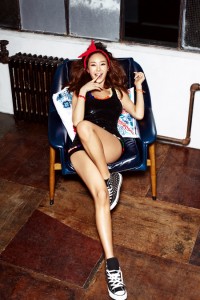 Despite her marginal commercial success, she has surprisingly not had a concert where she can stand alone. While her fellow label-mates have had at least one solo concert, G.NA has only performed either with Cube artists or multiple artists. She has done performances at various universities and army bases, but that hardly is of the same standard as a full-on concert. Also, unlike her counterparts, she hasn’t expanded into Japan. This would seem like a logical step, instead of the intent to target the Western market.

G.NA hasn’t had the opportunity to establish an identity or image. It’s almost as if Cube isn’t sure what to do with her. With her label mates, there is a level of consistency, and you know what to generally expect from the group: B2ST’s name says it all—strong concepts and 4Minute will give you a dance song. G.NA has the talent, charisma, and looks to be successful, if there was more stability. At the most, you could say that she is sweetly sultry and tiptoeing the line between cuteness and sexiness. 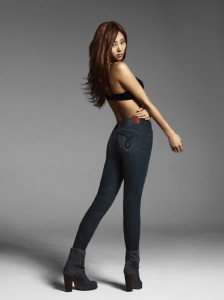 Due to the inconsistency, it’s difficult to determine who the “Real G.NA” is. Is it the confident woman in “Black and White,” the sexy dancer in “2HOT,” or the cute girl in “Pretty Lingerie?”

Throughout her career, G.NA has of course been known for her beauty. From jeans to lingerie, she has scored endorsements based on her figure alone. At the same time, she is under constant scrutiny due to being underweight and unhealthy. The juxtaposition is something that seems to follow G.NA and can only damage the view people have of her.

At the end of the day, G.NA is a soloist with solid vocals and a lot of likability. Perhaps, as she gets older, her image will be solidified and G.NA will be able to join the likes of Lee Hyori as a highly successful femme fatale soloist.