Say the "Magic Words" with Chamsonyeo 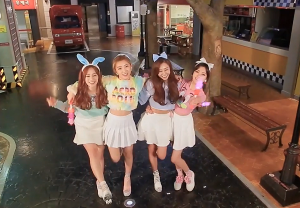 Hitmaker‘s latest season saw Hyungdon and Defconn putting together their latest project group. Although they had success with Big Byung, the male group that includes VIXX‘s N & Hyuk, Got7‘s Jackson, and BtoB‘s Sungjae, the producers decided to add another group to the mix since it was difficult to align all of their schedules.

This time around, Defconn and Hyungdon wanted to work with a girl group and met up with G.Na, 4Minute‘s Sohyun, After School‘s Lizzy, and Kara‘s Youngji to plan and execute their first song together. The group is led by Sohyun, a decision made after she won the tiebreaking vote in a game of rock, paper, and scissors against Youngji. Chamsonyeo is the name the four go by, and “Magic Words” aims to bring a positive message to anyone that is struggling in their daily lives.

Hitmaker shows the process of development from bonding time between the girls when they tried to do some hidden camera pranks to recording their song and shooting the music video for their debut song. Where “Magic Words” succeeds is in its aim of being an encouraging song. It approaches its subject matter lightly, and the music video has a refreshing comedic sensibility, drawing some of its aesthetics from comic books. The sets are very bright in colors, and there are scenes where comic book panels and effects are used.

The song has a youthful energy to it. The melody is a simplistic keyboard riff, and the chorus focuses on a refrain urging the listeners to have hope by reciting the magic words “joy boy jobobo.” The verses are at times punctuated with cheers and chanted, like a group of youngsters would when reciting a poem or nursery rhyme. The song has a capricious spirit and certainly aims to take a fresh approach towards sending the message of encouragement.

What is great about both groups coming out of Hitmaker is their lighthearted songs and lyrics. I was concerned about the pigeonholing of the girl group to a cute concept, but I think, more than anything, the group wanted to show this lighter image to get their inspiring words across. G.Na expressed this quality about Chamsonyeo during their first episode when they were all quickly brainstorming a cheer for their team. She wanted to combine both sexiness and cuteness to showcase their bright group. 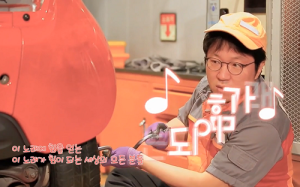 Even though I enjoyed “Magic Words,” the song is not one I would listen to again. It’s very repetitive and feels better suited for children’s television show. It’s sweet sounding but doesn’t pack as much of a punch as I would like. This first song from Chamsonyeo does show me that the group has a lot of potential.

G.Na’s voice is undeniably the strongest element pulling the song together. Her harmonies and silky tone can convey a lively spirit amongst the more conversational/rap verses. It boasts a lot to the potential of the group when they have such a strong vocalist among them to really pull together a song or to bring out the full power of a melody.

The lyrics and video are other redeeming points of this production. The message of the song aspires to encourage those listeners and workers who are down to be uplifted so I can’t knock it for attempting to spread positivity. The video drapes the girls’ cuteness with humor, often using silliness and over the top reactions to elicit smiles from a variety of characters played by Hyungdon and Defconn. These scenes each express how Chamsonyeo’s magic words, in the form of the song, can transform into what the characters on screen need in order to alleviate their stress and downtrodden attitudes or help them get through challenges such as battling a housefire.

This first MV from Chamsonyeo was great. At the end of the day, this is what K-pop is all about, and the whimsical nature of creating something with a nice message is laudable. “Magic Words” has that K-pop spark hiding underneath its charmingly aloof tone. For the members, who may not get the most opportunity or spotlight in their own groups, Hitmaker and their venture as Chamsonyeo helps to showcase their personalities. For a song such as this, those personalities come through on screen. The charming Chamsonyeo members have a lot to offer, and hopefully, with a better song, they will be able to create something that will resonate beyond the screen and outside of the show.