M.Pire is the Same as Everyone Else in "Not That Kind of Person" 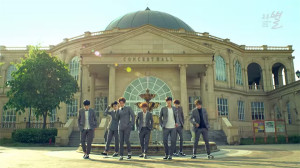 The lads of M.Pire have returned with their latest single “Not That Kind of Person.” When Jaejoong took an interest in the young group, even contributing a composition to their single album New Born (track “On My Mind”), I became intrigued. I saw a group with incredible potential and spark and was excited by what I heard on New Born. Unfortunately, this comeback song and its MV are both just a mess of mediocrity.

The video’s concept is about the same as every other video starring young, bright starlets. Brash, loud, and adorably annoying boy(s) meet bright, innocent/virginal girl(s), one boy goes after who the group deems the prettiest and traps her in a covert alcove somewhere (let’s not get into the cultural implications therein, this video’s a pinch too simple), boys go to the local hotspot to post up and flex, girls come through with their “sexy” makeovers, stunning the boys into silence. There’s out of focus slo-mo, a warehouse where the boys can truly show off their choreography, and an obligatory faceless architectural backdrop.

The camerawork is boring, the requisite zoom-ins at integral parts of the video (the boys’ rings, the girls’ and boys’ faces, etc.), and then the obvious spinning camera tactics to inject the video with… who knows what if not a certain feeling of motion sickness and a sharp pain in the brain right in the center of the forehead. The lighting, simple—light when it’s light; dark when it’s dark. Literally, the video is nothing more than a carbon copy of every boy band music video ever conceived. It’s as if the mastermind behind the video copied it straight out of K-pop Boy Band Music Videos for Dummies—now that’s what we call textbook. 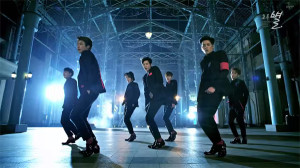 What does seem interesting is the warehouse theme—thrown in there for good measure, just so the MV’s creator didn’t miss anything. Though it’s completely random and seemingly tacked on there just to cover all the bases, the costuming is reminiscent to those who remember when MTV used to actually make use of that “M” at the beginning of its name. The black suits, complete with black jackets and thin ties, with sashes around the arms and the red accents are very reminiscent of Michael Jackson’s performance of “Dangerous” at the 1995 MTV Music Awards. The choreography also seems to pay a sort of slight homage to the performance, including the shuffle dance at the end of the “Dangerous'”second verse (the little side step the boys do with their personalized rings).

Songwriters and video producers must be on an MJ kick these days (Eric Nam’s “Come ons” in the final iteration of the chorus in “Ooh Ooh”), and as with this latest desire to migrate away from the electro compositions, I can’t say I’m not chuffed with the sudden urge to give respect to the greatest entertainer to ever do the damn thing.

Head-to-toe clichéd MVs can actually be forgiven if the song is amazing (as in last week’s release of 4Men’s “Erase”). However, “Not That Kind of Person” isn’t even a great song by even passive K-pop listener standards. The song continues the trend of utilizing instrument-based music and composition more inclined toward funkier, more “mature” fare instead of the ever-prevalent dubstep/pseudo-electro constructions popular in pop music right now. However, while I can certainly appreciate music that favors using a band (or at least the synthesized rendition therein), the song does very little else to inspire any excitement in me.

Composition aside, the song is utterly uninteresting. Speaking honestly, there’s nothing in the world, especially in the world of K-pop, that’s original or brand new. But what keeps even revisited themes and concepts “fresh” is the producer’s/group’s/company’s/etc. ability to tackle them in a way that’s different from what’s saturating the market. Give the concept some lightening to keep it from becoming stagnant. But there’s nothing here, composition-wise, lyrically (lines like “When she comes out, it becomes a jungle around her/Everyone looks at her, all the wolves hit on her” and “I don’t need innocence or a good girl/Your nose is sexy and you make things simple/You’re my Venus”), or even vocally (the boys’ voices are bland; the rapper’s delivery and swag are both cartoonishly put-on) that’s at all strong enough to keep my interest. Oh, it’s a standard K-pop song, and there will most definitely be fans of it. After all, a popular trend doesn’t become popular without a huge thrush of people flocking to it. But for those who’ve even remotely traversed the K-pop universe, this is nothing put a rapidly dimming ball of gas in a galaxy full of stars.

No doubt, M.Pire is a group of adorable, fairly talented young men… in a sea of adorable fairly talented young men. The song is reasonably catchy, the dance is reasonably cute and easy enough to follow, and the costuming is okay—simple, not too outlandish. I can dig the little touches paying tribute to Michael Jackson, but that wasn’t enough for me to really like the video. I appreciated it for what it was—pop fluff, which is just fine. But it’s also uninteresting.