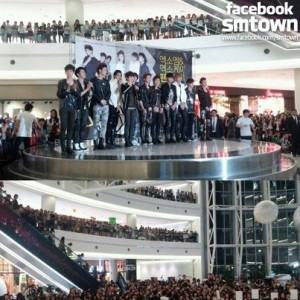 Just when you’ve breathed a sigh of relief – your babies are finally resting after a jampacked schedule – their company suddenly announces a comeback! And it’s a full-length album, right after their umpteenth mini-album/single too! That means ten or more new tracks, longer promotions, a new music video, more variety show appearances and radio program spots to promote the album, and maybe even a concert! Not to mention all the fansignings and high-touch events – and all within the course of two months. After this period of promotions, you breath a sigh of relief again –maybe now your darlings can have proper rest – and then, you guessed it, they announce a new mini-album one month later!

This is definitely not sane, and is worlds apart from what we see in American music.

K-pop is fast-moving. Unlike its Western counterparts, specifically that of the American music industry, Korean acts promote and wrap a CD’s release in as long as two months, sometimes even three months. Some of the more prominent artists ride on their status in the industry and pack all promotions in a single month, sometimes less. Other acts who need visibility will promote multiple times a year to build up their fanbases; recent examples are Infinite in 2011, B.A.P in 2012 and VIXX in 2013. Of these three acts, two groups received their first number one on a weekly music show after putting in tremendous efforts to stay ‘in’. Juxtaposed with acts in America who commonly promote their releases over the course of two years, it’s easy to see why and how K-pop is consistently presenting something ‘new’, in the attempt to win the love of the Korean public.

One doesn’t get the sense until they look at two years together and compare not the number or the quality of hits but rather the trends and the type of music generated from each year. What really came to mind for me was 2008, a big year in K-pop no doubt, and 2013, a year that is still fresh in our minds.

1. Return of the Girl Groups 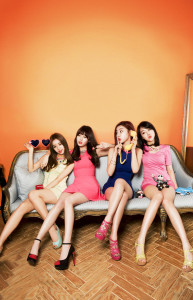 In 2008, there were only two girl groups that held rank in K-pop. They delivered undeniable hits: Girls’ Generation had “Kissing You,” and the Wonder Girls had “Nobody”. Of the two, it was “Nobody” that was the real hit, sparking a nationwide dance craze and JYP’s America Take-over craze. One can also include Kara and their song, “Honey,” on this list, though they really only hit it big with “Mister” in 2009.

2008 was probably the last year of the domination of solo singers and male groups. We saw the year dominated by established acts such as Big Bang and TVXQ, solo singers such as Lee Hyori, Rain and Son Dambi, and the then-rookies, SHINee and 2PM. Can someone even remember a female rookie group from 2008 that is still creating hits in 2013?

Despite the draw of male groups — male groups consistently receive more press, more fans, and they have an undeniably easier climb through the tiers of K-pop-dol-dom — 2009 saw the start of female groups bursting forth. By 2013 however, female groups were getting the same amount of press, if not more. There have also been more hits coming from girl groups. While the bigger singing ensembles with national popularity have continued to nab wins – looking at you Girls’ Generation and Kara – there have also been an increasing number of female acts in their company. Some of them are: Ailee, IU, SISTAR, SISTAR 19, Girl’s Day, f(x), 2NE1, and 4Minute.

From these new acts, we also see a more diverse selection. In 2008, female groups were either cute (“Kissing You” and “Honey”) or in possession of a niche or novelty effect (“Nobody”). Fast forward to now, we see a more spread out distribution of sexy, spunky, fierce, and cute female acts.

2. The Super Rookie SHINee vs. The Established Group SHINee

In 2008, there was one nugu that got rid of its nugu status fairly quickly. SHINee, though having fierce competition from 2PM, easily won all the rookie awards they were qualified for, thus, their super rookie status. It’s hard to recall a group that has been as deserving of their title of ‘super rookie.’ Some may quote Infinite, Beast, B.A.P, EXO or even last years Bangtan Boys, but they haven’t made the same splash as 2008 SHINee. SHINee made their debut with minimal promotions — SM Entertainment jumped audiences with the group — and they played it out with one of the most perfect debut songs K-pop has ever had: “Noona You’re So Pretty (Replay).” Their next comeback, just months later, with “Love Like Oxygen,” earned them their first number one on a weekly music show and seemingly sealed the deal for the year-end award shows.

2008 SHINee is a stark comparison to present-day SHINee. The SHINee World (the fandom that is) has not only grown exponentially, the group has too, and it shows in their music. Who would have thought that the R&B influenced group would go on to give us hits like “Dream Girl,” “Why So Serious?” and “Everybody.” While the quintet still retains their smooth moves, they also have an expanded range of moves and sounds in their repertoire. We now have a better glimpse into the music they want to make; we’ve seen the various experimentations in their sound; and we’ve witnessed the group burgeoning in Japan and returning to Korea from that. There isn’t anything more fantastic (elastic) than witnessing an idol group develop in a stable and mature manner. 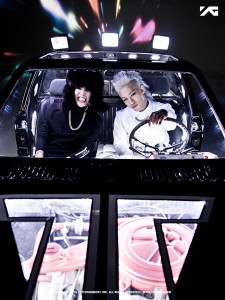 In 2008, the only mainstream hip-hop influenced idol group was Big Bang. In fact, they even won multiple ‘Song of the Year’ awards that year with their song, “Haru Haru.” Since then, there has been an increase in groups influenced by hip-hop, and all of them start with the letter ‘B.’ We have the 2011 rookies Block B, B.A.P from batch 2012, and the most recent Bangtan Boys who debuted in 2013.

In 2013, each of these aforementioned artists had a comeback of some sort. While Big Bang may not have returned as a group in 2013, the members had solo activities. While Seungri’s release was more in tune with what Justin Timberlake had been making, the other three members went the hip-hop way. There is “Doom Dada,” a subdued beat that complements T.O.P‘s deep rapping style, “Ringa Linga,” Taeyang‘s R&B and hip-hop influenced track, and Coup d’état, G-Dragon‘s full-length masterpiece.

As for their hoobaes, B.A.P started their sophomore year with “One Shot.” The song balances the hip-hop roots of their leader, Yongguk, with the vocal capabilities of their idol-trained vocalists, Daehyun and Youngjae. Bangtan Boys made their long-awaited debut with the clean but undoubtedly hip-hop influenced “No More Dream,” which was followed up with “N.O.” Block B, on the heels of their troubled past, made a comeback this year that was very, very good. With “Very Good” they did something that no other mainstream idol coming back from a case like theirs would do/have done – they went head on with the comparisons (with the pioneer of hip-hop influenced male idols, i.e. Big Bang) lumped at them.

Needless to say, these four groups — in their various iterations — brought some of the best music of 2013.

4. Bondage made to look cool – or creepy.

How can any article focusing on the year 2008 finish without any mention of the Rising Gods of the East, TVXQ? Before the split – cue crying here from this Cassiopeia – the group reached what is undoubtedly their peak with “Mirotic.” The “Mirotic” music video is practically legendary – show anyone the music video and they’re likely to get hooked. 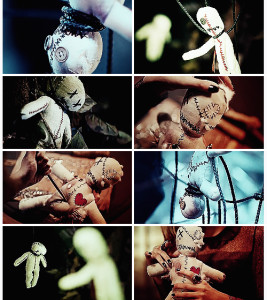 In 2013, someone took their bondage theme to the extreme. We all know them now – VIXX and “Voodoo Doll.” While the bondage theme looked cool – who wouldn’t want Jaejoong chained to a wall, as you hover over him? – the “Voodoo Doll” MV did not make the tied up members tied look nice at all. For one, they were tied up using rings pierced through their skin and that has got to hurt. With advancements in technology and make-up (since 2008), the relative freedom of coming from a smaller company, and the possession of a fanbase attuned to such gothic themes (not that it makes any of us Starlights any less surprised), it’s hard to think of another group that’s capable of pulling off such a concept effortlessly and without complaint or comparisons. In fact, this comparison doesn’t even really hold up since both groups — TVXQ and VIXX — use similar but different concepts that conclude in two dissimilar yet both visually stunning music videos. While both MVs are used as visuals of the boys under the spell of a female, TVXQ makes it look effortlessly sexy and hip, while VIXX makes it more grounded in our reality with the usage of the voodoo doll.

So yes, in 2008, TVXQ made bondage look cool and in 2013, VIXX made it look creepy. And really, their MVs were some of the best from their respective years.

While we may miss the quality of music that we got from — as it seems — all the different acts in 2008, the leaps and bounds the industry’s gained since then is enough to tide us over. As last year’s rookies and the rookies of 2012 find their sea legs and continue making music, the senior artists are keeping their sound and selves relevant with relative ease.

Doesn’t this make you wonder: what would we conclude when we compare the “Gee” and “Sorry Sorry” infested year of 2009 with the year ahead? We’re only a quarter-way through and there’s much that could happen.

Leave your thoughts below!