Swing Your Hips With Super Junior-M 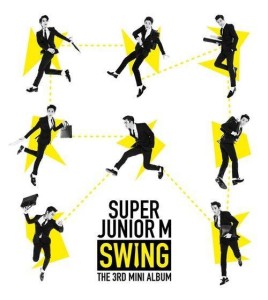 Swing, Super Junior-M‘s third EP, has swung me around to a new way of thinking. Before this release, my feelings towards Super Junior and anything related were pure apathy, passionate meh, and a lack of caring so deep it scraped the bottom of the Marianas Trench. After hearing Swing, though, I think they’re OK. Is Swing a musical masterpiece? Of course not. Is it a decent way to spend 20 minutes? Yep.

The EP opens with title track “Swing”, which has been gone over already. It serves as a good intro to the EP, with a high energy beat that’s almost impossible not groove to. While “Swing” does have some very varied elements– a brass band, a hip-pop breakdown, and a techno base- the song as whole flows surprisingly well. The only real complaint is the criminal underuse of horns, and that’s more of a personal preference anyway.

Fly High” builds on the momentum of “Swing”. It retains the high energy  and dance-ability, has swapped out big band for rock as the genre of choice. There’s also the refreshing choice of using genuine instruments over synth music for the backing track. The bridge is the high point of the song, with a sudden drop in tempo to nothing but a lone voice and piano before building right back up for the last chorus. “Fly High” is a logical follow-up to “Swing” in terms of lyrics as well. Where “Swing” was about forgetting problems and doubts, “Fly High” is about letting them go. If the former’s message is carpe diem, the latter’s is carpe life. Preferably with both hands.

The EP slows down with the charming ballad “My Love For You”. Continuing in the “genuine instruments” vein, the track has a very acoustic, bare-bones sound. This was a wise decision, as it lets the glorious vocals shine. The boys sound incredible here. Stripped of the flash of the previous tracks, this lets you enjoy Super Junior-M’s substance. “My Love For You” does have a bit of an OST sound to it, but I mean that in the best way possible. It’s a very pleasant way to end the first half.

The EP picks up again with “Strong”, a decent dance song. The beat’s pretty sold, and it does have the same move-your-butt vibe as “Swing” and “Fly High”. There’s just one resounding problem: It sounds like an f(x) song. Not the music, which, okay, does have more in line with f(x)’s sound them Super Juniors, but the lyrics. The whole song sounds like it was written from a female perspective. Specifically, it’s directed at a former player who finds himself falling in love. The use of the second-person makes it unclear if the target is male or female. The repetition of “Bad boy!” in the chorus is really just the cherry on top.  SM, did you maybe get some wires crossed here?

“Addiction”, like “Fly High”, serves as a continuation of the track before it. In this case, the traits it picks up on are the electro vibe and the element of loving someone you shouldn’t. Unfortunately, it also shares the lyrical tendency to sound like it was meant for a girl group, but “Addiction” at least figured out how to use third-person pronouns. It’s decent, but not spectacular.

Swing  has some definite gems. “Fly High” is easily the best song on the album.  “Swing”, “Addicted”, “My Love For You”  all good songs that deserve at least one listen. “Strong” is too, even if it’s also a perfect example of why third-person pronoun really need to catch on. “After A Minute” is the only bad song, but ending on it gives the whole EP a bad taste.

The odd thing about Swing is that the first half is cohesive, and the second half is cohesive, but the two halves are not cohesive. “Swing”, “Fly High”, and “My Love For You” all share an emphasis on instrumentals and a theme of hope and positivity, where “Strong”, “Addiction” and “After A Minute” are more bitter, more heavily produced, and sound nothing like Super Junior-M. It’s not a bad EP, not by a long shot. It just really needed another once-over.