2NE1's "Falling In Love" MV, or Why Summer Singles are the Greatest

It’s already July, which means that summer has been around for quite some time here in the northern hemisphere. But with summer singles continually popping up on the K-pop scene lately, it seems as if we’re ushering in the summer season anew with every release. 2NE1 is the latest to join the bandwagon, having dropped their digital single “Falling In Love” and subsequent music video only a couple of days ago. Check out the MV below:

There’s something about the earnestness and novelty of summer singles that makes them immune to the usual sense of seriousness and self-importance that tends to characterize K-pop music, and 2NE1 is no exception to the latter rule. Sure, YG certainly deserves points for being ballsy and unabashedly bizarre at times with their material, but it gets suffocating to see the same tropes being played out again and again in 2NE1’s material. In comparison, the video for “Falling In Love” is light and refreshing, and while it’s not as “creative” as 2NE1’s usual works, it still sneaks in just enough of that weird 2NE1 flair (gold spray-painted male models flanking Minzy at the pool, for instance) to ensure that the video stays far from being blah. Likewise, the song has a zany beat typical of 2NE1’s music, but still keeps its summery, reggae-inspired flavor at the forefront.

Admittedly, there’s not much to say about “Falling In Love” apart from it being a fun, light summer tune that reflects 2NE1’s unique style in its classic beach-ready beat. Some might take offense at this rather blase assessment of 2NE1’s highly anticipated comeback song (after a year long absence, no less!), claiming that “Falling In Love” is just a digital single, nothing more than a fun, radio-friendly summer tune with an August expiration date, and that YG is saving the good stuff for 2NE1’s real comeback in a couple of months.

But in all honesty, I prefer this toned down, agendaless 2NE1 over a 2NE1 that is blatantly trying to “make a statement” through a needlessly gaudy comeback single. There’s something about summer songs that are light, novel, and temporary, but “Falling In Love” does a good job of maintaining that carefree attitude without cheapening the entire production. The last thing anyone really wants is a fun, summer single that is trying too hard — and let’s be real here: relaxed, fun 2NE1 makes for a much more refreshing experience than tryhard 2NE 1. 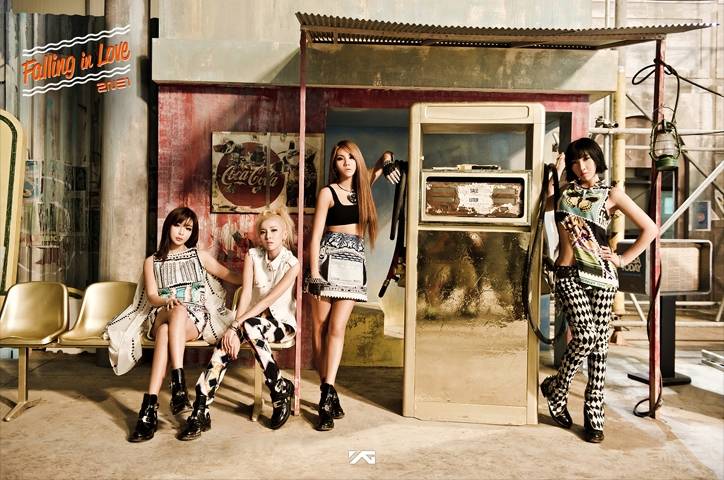 I guess the one thing I really love about “Falling In Love” is that it’s fun in every way: it has a fun beat and a cute music video, but more importantly, it’s executed and presented in a way that doesn’t make a huge production out of itself. I mean, YG literally just plopped it onto the K-pop scene with one teaser image and virtually zero fanfare afterwards. It’s a practice expected of a summer digital single, but that same carefree attitude (in both the PR surrounding the release and the release itself) is one that is not seen enough in the oftentimes overproduced world of K-pop. 2NE1 tends to be particularly guilty of this, which makes it all the nicer to see “Falling In Love” being as understated as it is.

This is what makes summer K-pop singles so great. They’re commercial as hell and tend to run on the cheap side when it comes to production value, but hey — isn’t this what guilty pleasures are made of? Songs that would otherwise be horrifying to listen to become acceptable or even enjoyable because they are made to accompany happy summer memories. In many ways, summer K-pop singles embody the ideal summer perfectly — vapid and juvenile at times, but nonetheless carefree and fun. Of course, let’s not pretend that the bulk of us aren’t spending our summers sitting in our air-conditioned homes watching Netflix all day, but this makes the case for the greatness of summer singles even stronger: why go to Bora Bora and drink champagne on the beach when you can do so vicariously by listening to DBSK‘s “Hi Ya Ya“?

Obviously, “Falling In Love” boasts a higher production and creative value than “Hi Ya Ya” and other novel summer singles, which makes it slightly less of a guilty pleasure and more of a song and MV that can be enjoyed for its musical and creative appeal, and not just as a summery mood-maker. In all likelihood, 2NE1 will be going back to its leather-and-spikes, Baddest-Bitches-of-K-pop image for their actual comeback that we will still love like we always have — but just like the fleeting summer, “Falling In Love” is a glimpse of a relaxed and happy 2NE1 that isn’t out to impress, but just to have fun.