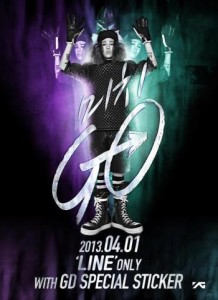 Whatever I might have expected of Spring in K-pop, it certainly did not include Big Bang‘s G-Dragon going a little bit crazy photographically…well, maybe I’m not that surprised.  G-Dragon kicks off his One of a Kind World Tour in Seoul this weekend and he will be singing his new song “Michi Go” (Go Crazy) at the concerts.  The song will be released online on April 1st through his official Naver LINE account, a mobile messenger app. (Yahoo Philippines, YG Entertainment)