TS Entertainment‘s lovely quartet, Secret, has returned with a new EP Poison after a year of Japanese promotions. It’s been a year since their last Korean promotion for 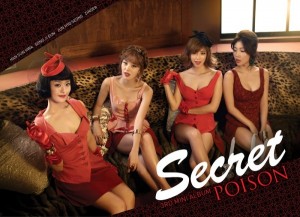 “Love is Move,” and with their rookie hoobaes B.A.P rocking out with great material, even though they should be getting some rest, here’s hoping that TS Entertainment has something great in store for Secret. 2012 seems to be a year of rookies and under the radar groups, like Sistar, 4minute, and ZE:A, really stepping it up to the plate, and giving some of the upper tier groups, at least from my perspective, a lot more competition in the musical department. Secret is indeed one of those under the radar groups and the solid talent the four ladies wield, combined with some well-produced music, they can crack the nugu status, or at least, gain a lot more exposure as a whole. I’ll admit that I haven’t been swayed by most of Secret discography as of late but fingers crossed that they raised my expectations of them as Sistar did earlier this year.

As much as I hate comparing contemporary groups together but I feel that most groups, at least behind the scenes, might feel a sense of competition between their contemporaries, moreso than sunbae or hoobae groups. So with the success Sistar had this year with “Alone” and their follow-up, Loving You, there is no doubt that this shifting of the balance of power between the two groups, might have TS Entertainment worried. I think the success of Sistar’s “Alone” lies in that it was a type of song and style that was different from what Sistar normally produced, but fit the group perfectly, and they also managed to use the group’s biggest asset–Hyorin–to carry the song and highlight the other members’ at the same time. As a group, Secret has a lot more talent to go around, with Zinger‘s solid rapping, and Ji-eun‘s and Hyosung‘s strong vocals, so a song and album that fits them conceptually and musically, coud be the push Secret needs to get far away from the dreaded nugu status, as their contemporary has just about done.

The first track on their EP, “Telepathy,” is a sweet acoustic ballad, where the vocals of the girls truly shine. The girls’ have a perfect vocal range for this kind of song, and manage to avoid making it saccharine. It’s a very simplistic song in nature, but the light pace and the girls’ harmony makes it a very pleasurable song to listen to. Although I’ve listened to more acoustic ballads that I could care to count, unsurprising for a person who likes to listening to IU, Younha, and Juniel, but the mood of the song makes up for its simplicity and the gentle lead into the song is easy on the ears and a good start into the EP. Nothing remarkable, but it will make you in a much better mood upon first listen.

Their promotional track, “Poison” is their second and title track on the EP, and it’s a very interesting song. Some have drawn comparisions to “Madonna,” and the similiarities are there, but “Poison” has much more bombast and takes a lot more advantage of the big band elements of the song. The structure of the song is interesting, as it’s like a typical K-pop hook song but reimagined, with the same more emphasis being drawn on the chorus in comparision to the verses, and there isn’t much buildup within the song, but with a genre of music that should be a lot more slower in pace, so the conflictions between the two, make it get very tiring to listen to after a while. It’s not all climax, like let’s say “Lucifer” is, but the pace of the song is very quick and doesn’t provide smooth transtions between the chorus and the rest of the verses. It felt like the song sped up as it progessed and, although the hook is very catchy, made the song felt forgettable because of it. With time, the song gets a lot more tolerable even if the progression feels off.

Secret continues with the jazz with “Falling In Love” and it’s a very smooth song, with a nice pace, although it is very similiar to “Telepathy” just with a few changes in the instrumental. The chord progression is almost identical, but the instrumental is just a lot more jazzy and faster than “Telepathy.” On its own, the song is good, but there isn’t much about the song to rave about. It’s a nice listen, but feels like a filler track, because it lacks much difference from “Telepathy” and doesn’t provide a different style to the jazz theme of the EP. “Calling U” suffers from having the same style as “Telepathy” and “Falling In Love” but the woodwind instrumental and the clearly laid out middle eight with that one high note, but doesn’t differ much from the other two songs otherwise.

“1,2,3” is definitely my favourite song on this EP, and takes a U-turn from the same, acoustic-based ballad but just differently styled theme, and has a very pop sound and I enjoy the synths and the clapping beat that keeps the pace steady, and the path leading up after the middle eight takes the song to another level with its soaring quality. It misplaced in the EP, because of its stark contrast to the other four songs, although its definitely my favourite even if it does feel like it got cut off near the end. The change up in style at the end of the EP made me wonder what other styles they could have tried, instead of rounding out the EP, which isn’t the best feeling after having finished listening to an EP.

Poison is a decent EP, with nice-sounding songs, but it felt one-note, with the exceptions of “Poison” and “1,2,3” and certain parts of “Calling U,” it didn’t feel like anything stood out very much. As time progresses, I might grow to like “Poison” and some of the other songs, and it was a solid effort, but nothing really caught my attention. So, overall, I give this EP, a 3.5/5, not bad, but some change would have been nice in the EP.

What about you, Seoulmates, which song do you pick as your “Poison?” Put in the comments section below!