Regular Seoulbeats readers are probably already aware of my love for Infinite. Frankly put, Sung-gyu, Dong-woo, Woo-hyun, Hoya, Sung-yeol, Myung-soo, and Sung-jong are just perfect in my eyes and can do no wrong. Not only that, but they’re all gorgeous, too — even Dinowoo, who some irrational people find unattractive. Luckily for Infinite, their company Woollim knows how to dress them. Like all K-pop groups, they’ve had some cringe-worthy outfits in the past, but overall what they wear for the stage suits them wonderfully. Figure-flattering, cohesive, masculine, mature, and often classy. 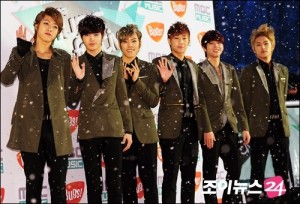 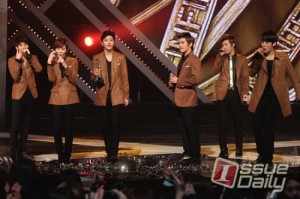 Let’s look at one of the reasons why Infinite look so good on stage: class.

Unlike other K-pop idols, these boys generally stay away from loud prints, bright colors, spandex, revealing clothing, glitter, and fringe. More often than not, Infinite wears dressy clothing onstage. Blazers, slacks, brogues, and button-up shirts complete their look. Sure, it’s a little basic, but when it comes to male idols, I prefer them dressed more simply. For the most part, no vegetable costumes or cross-dressing or brightly colored skinny jeans or sequins or sparkles. Maybe there were a few exceptions (it’s nearly impossible to avoid cross-dressing and skinny jeans in K-pop), but nothing of the norm. Men look good in suits, and Infinite always looks good in whatever they wear.

Another thing that makes their look classy is the use of black. Infinite nearly always wears black. Aside from the matchiness of it making it more difficult to catch mistakes, it makes the group look put-together and polished. And the last thing that makes Infinite classy is how rarely they show skin. Compared to other groups, Infinite dresses conservatively, but they’re sexy all the same. During performances, you may see Woo-hyun’s collarbones or Hoya’s biceps or glimpses of Myung-soo’s back (om nom nom to all three) but that’s about it. 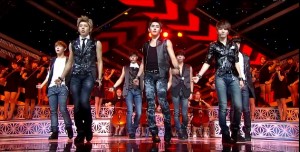 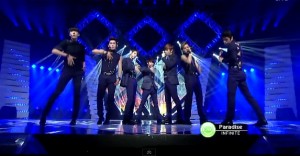 Fit is another reason why Infinite always looks great. K-pop groups in general always wear tight clothing — better to show off their amazing bodies — but in Infinite’s case, the fit of the clothing is never an issue. The pants are fitted enough to show off their lean legs but not so tight they’re constricting or awkward. They often balance their fitted pants with loose jackets. And they always look masculine. Not masculine as in rugged and muscular and aggressive, but in a mature, sophisticated sense. They’re not packaged so much as noona-killers as they are mature young men. 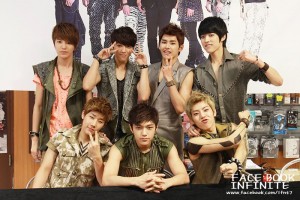 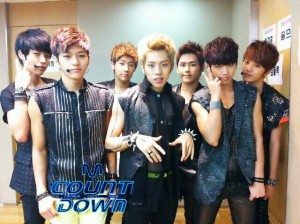 Infinite isn’t always matchy-matchy with their clothing. During past promotions, such as their “Be Mine” promotions, the members of Infinite wore individualized outfits that were brought together by a color scheme or specific detail. You see on the left, Infinite wears clothing in different shades of army-green and most of the outfits sport flared collars. On the right, their outfits are sleeker, made cohesive through the dark blue color. Let me just say that Infinite looked sexy as *BEEP* during “Be Mine,” and their wardrobes during that promotion period are quite possibly my favorite. As much as I love the boys in suits — and I do love them in suits — I loved the edgier styling and individualized outfits of “Be Mine.” The fake tattoos, the zippers, the guy-liner — everything.

To me, Infinite exists to prove that there is such a thing as perfection. Aside from being talented and adorable and funny — you’re all vomiting now, aren’t you? — my husbands are snazzy dressers. Well, more accurately, their company knows how to dress them in a way that slays the hearts of millions of women everywhere. Because of that — and obviously not because of my die-hard love for them — they’ve made my list of Best Stage Outfits.

I leave you with a picture of my husband playing a guitar. 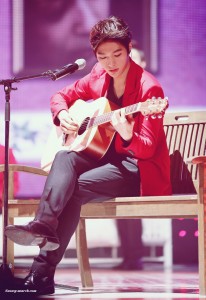