You’d think that after all this time I would get used to the feathers, but it gets me every time.  Idols need to stop wearing animals. It seems they have not gotten the memo that birds do not equate sex appeal. 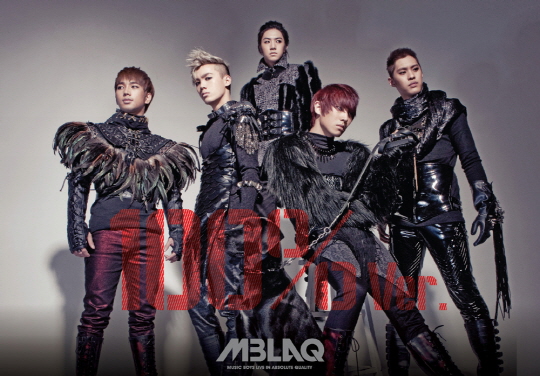 Do you guys see that? Are you just as mad as me? What have the stylists done to my G.O. and Joon? They both look like Big Bird who went through an emo phase (Sesame Street doesn’t like to talk about it, it was a hard time for everyone). No but seriously, WTF.

But by this point, I really should not be surprised at MBLAQ’s clothes. From Joon’s shirt which got savagely mauled by a paper shredder in “Oh Yeah” to Mir‘s flying squirrel ensemble in “Mona Lisa,”  MBLAQ’s questionable outfits should not be throwing me off. But when I saw this picture,I facepalmed. Here’s a quick run down of my interpretations. 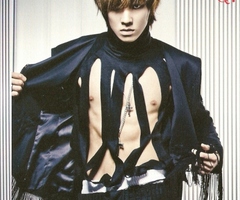 G.O. is wearing shimmery red pants and channelling his inner Aztec god with that feather necklace. This one made cry in the inside because of what they did to my favourite member of MBLAQ. Instead of giving him horrendous outfits, I think he should have brought his moustache back. Just saying.

And look out, chocolate abs, because Mir is donning scales on his stomach. So what will it be? Scaley stomach or fishy ventricular?  But seafood aside, I am digging his mohawk.

Next up is Thunder, looking like a pimped out vampire minus the sparkles and plus the hair gel. He also has this hungry look in his eyes as he stares off to some unknown object in the distance. Looks like he found out what he’s having for dinner: stylist-noona.

And we already know that Joon looks like an angsty Big Bird, so let’s move on to the beloved leader, Seungho.  He has way too much leather on him and his buzzcut doesn’t suit him nor his face structure. But I’ll deal, as he looks the most normal of them all.

The song that they are promoting for this album is “It’s War.” Overall, I was expecting a more militaristic feel to it. Instead we get this: S&M gone horribly wrong.

What about your thoughts? Did these boys look sexy as always or should whoever thought this image as aesthetically pleasing be fired immediately? Leave your comments below!