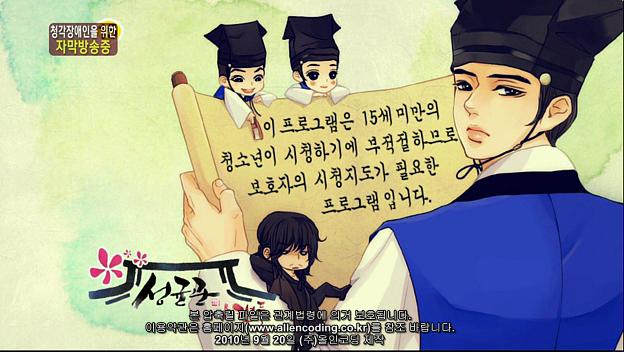 In just two weeks, the OST for SungKyunKwan Scandal has sold over 110,000 copies.  After experiencing some troubles with the distribution of the OST (rumor was that SME was playing dirty), it was finally released on September 16th.  The OST is good, it’s one of the only dramas that I’ve watched that I have even noticed what was playing in the background, but many are attributing the OST’s success to the return of JYJ, Jaejoong, Yoochun, and Junsu to the Korean music market.  The trio sing one song “Found You” together and Jaejoong and Junsu sing a solo song each.  I don’t doubt that the JYJ songs contributed to the sales, the Cassies out there were more than ready to get something new from JYJ in their native tongue.

My favorite piece of music was an instrumental played during a rather important scene in episode three which unfortunately isn’t a part of the OST.  It’s a beautiful piece and vaguely reminds me of another song, but I can’t put my finger on it.  And no, I don’t just like the song for the scene it was used in ;o).