This April, the K-pop world was apparently feeling the energetic springtime spirit. Comebacks poured out all month, including releases from big names like Shinee, Kang Daniel, Apink, Day6, and Itzy.

In such a busy month, it’s not surprising that our Seoulbeats team couldn’t cover everything. Luckily, we have Unsung Artists, a monthly segment spotlighting the best comebacks we didn’t get around to reviewing. Our April selection features MVs from K-pop and K-indie artists that are full of bright colors and bold moods.

Before we dive in, a couple of honorable mentions: SuperM’s “We Do” isn’t exactly the most inventive MV, which makes sense since it is basically a glorified advertisement. But the song is breezy fun, and the groovy choreography really showcases SuperM’s stellar dance skills. And Dongkiz’s “Universe” is as simple as simple can be, but the group make the most of their screen time, radiating irresistibly sunny energy.

South Korean-based Japanese singer Yukika is an anomaly, and not just because of her unusual origin story. Yukika has a truly unique sound and aesthetic, especially among her peers. Her music is heavily influenced by city pop, a mostly defunct musical genre, and her style is retro with an ethereal twist. Most crucially of all, Yukika’s songs have a special balance of sweetness and melancholy.

All these qualities are on full display in Yukika’s newest release. “Insomnia” is a cheerfully dreamy song with nostalgic lyrics. Its MV features a gorgeous push and pull between shadow and light, darkness and neon technicolor. A polished Yukika interacts with another, less put together girl. Their relationship is not defined. It could be romantic, artistic, or even a representation of two halves of a single person interacting with and inspiring each other. Much like the whole of “Insomnia”, the dynamic between Yukika and her partner is ambiguous and captivating. “Insomnia” may not have a lot of concrete answers, but the delicate emotional place it transports listeners to is well worth the trip:

Is it real or a dream?

After an impressive late 2020 debut, StayC are back with an energetic sophomore comeback. The MV for “ASAP”, with its riot of bright colors, cartoon inserts, and unabashedly artificial sets, feels like a fun throwback to second generation girl group aesthetics. It also pairs nicely with the slightly juvenile yet infectious self-confidence of the track:

I don’t like always being sweet, so check it

I can tell if you have good manners, if you’re nice

But if it’s only momentary, I would never even start this

Sometimes, even when I think about it

The fun yet simple MV for “ASAP” works so well because the material it is presenting is quality. Famed producing team Black Eyed Pilseung know how to make a proper pop ear worm, and “ASAP” is no exception. The song’s straight-forward choreography also has an undeniable old-school charm. “ASAP” may be a big tonal shift from StayC’s prior title track “So Bad”, but it’s a great song, and the group pull it off, demonstrating impressive rookie versatility.

In his first comeback post-military discharge, Yoon Jisung sings about missing his ex. But the MV for “Love Song”, while it does match the track’s lyrics, feels even more closely connected to the madness and mischief of quarantine. Wandering a brightly colored apartment complex, Yoon Jisung tries and fails to keep himself occupied. He gazes vacantly into nothing as he flips a vinyl record back and forth. He throws a party for himself in the hallway, complete with balloons and confetti, only to end up a sobbing mess. And he literally runs out of his own human battery on his couch.

“Love Song” is a nice breakup track, with its bitter playfulness and softly catchy melody. The MV takes the song to the next level, showcasing a universal narrative that has a special resonance in 2021, when many people have spent a good chunk of the past year and a half lounging in their homes, drowning in their feelings. In any time, “Love Song” would be a good comeback. In this moment, it’s a painfully relatable great one.

At the start of “Loser”, viewers are introduced to Cheeze and a quirky cast of characters living in an off-kilter sitcom universe, laugh track included. There’s a cute mouse named Alex that causes all sorts of trouble, and a talking tree that just might be a representation of how the internet never stops providing commentary on people’s everyday lives.

“Loser” is an intensely whimsical MV for a very cutesy song. One wrong step and this release could have easily slipped into grating territory. But it doesn’t. That’s because the eccentric events that occur in Cheeze’s sitcom household, the petty frustrations and imperfect resolutions, aren’t just a gimmick. They’re actually a spot on illustration of the song’s message that growing up is hard, slow, uncomfortable, and also kind of a joy. The exact style of the storytelling might not be to every viewer’s taste, but “Loser” is likely to strike a chord with anyone that has experienced or is experiencing the fears and hopes of young adulthood:

I’ve grown up so fast, am I really an adult?

I still don’t know everything

I still don’t know myself

Like StayC, P1Harmony are promising 2020 rookies that are making their first post-debut comeback. Lyrically, “Scared” is a fairly typical intense hype song, but the MV takes visual risks that pay off, elevating this song above the crowd.

The first thing viewers will probably notice about “Scared” is that its editing is intense, sometimes flipping between images at a million miles an hour. This is a jarring way to construct an MV, but matches the experimental and heavily percussive sound of “Scared”. The wild cuts also are one way that the MV commits to its gritty aesthetic. Lots of K-pop acts go for a gritty vibe, but few are willing to sacrifice the standard polished industry style while doing it, leading to half-hearted and ineffective results. “Scared” isn’t completely successful in its quest for grittiness, but it gets a lot closer than most because of its willingness to throw out the K-pop rulebook and embrace unusual camera angles and a different editing approach.

Another standout visual aspect of “Scared” is its contrasting color palettes of gritty industrial grays, black and white, and neon blue and red. There is also the bizarre yet intriguing addition of CGI falling meteors. All these elements come together in the strongest way during the song’s dance-heavy refrains, which burst through the screen with unrestrained energy. While most hype songs go in one ear and out the other, “Scared” is likely to make a lasting impression thanks to its distinctive MV. The song itself also has a couple of memorable musical moments, such as the tantalizingly melodic pre-choruses. “Scared” buzzes with potential that doesn’t totally materialize, but P1Harmony have many years and countless comebacks to reach their full strength, and “Scared” is a solid start. 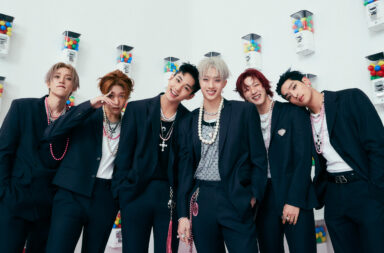