When Stray Kids officially debuted with “District 9” in the beginning of 2018, their fiery verses, rock influences, and ram-down-the-door approach left a lasting impression. In a dystopian scenario, they raged against the pressures of society and provided catharsis to a quest shared by many: finding out who you are.

This journey would prove to be a central theme of their work, permeating their prolific discography and evolving as they grow. In the aforementioned debut, it comes off demanding and rebellious, like the world owed them an explanation:

Actually, I don’t know myself
It’s frustrating, I’m always worrying
Answer me
Give me an answer, a clear answer please
If you can’t then please stop interfering

While “District 9” marked their official entrance in the industry, Stray Kids have been turning teenage angst into art long before that. Led by pre-debut production trio 3Racha (composed by members Bang Chan, Changbin, and Han), they have been writing and producing all of their material, infusing it with authenticity and vulnerability. Off from their pre-debut EP, the single “Hellevator” captures the sometimes infernal ride towards growth:

People tell me this kind of suffering
Is just a passing storm
That if I want to succeed, even though I’m afraid
I need to set up a trap called failure
As I bit on the bait that is pain
I’m wandering
As I put away my tired wings of passion

Despite being fresh out of the oven, their prolific discography encompasses 6 EPs, divided into a mixtape and two conceptual trilogies. A cohesive, linear narrative is one of the group’s most attractive features. This thread spans from sound, to aesthetics, to lyrics, and finally to their own growth — as idols and as young men. The first trilogy, named I am…, starts with the group’s journey into figuring out who they are not, as in I am NOT’s b-side “Mirror”:

Who am I? I’m looking at myself but I can’t figure it out
I am not, maybe I need to find a different mirror
How much more do I have to wander
Until I can look at myself and smile?

Filled with raw frustrations from being an adolescent, the EP captures the estrangement from childhood and the anger of not recognizing yourself anymore, or realizing you never did. After aggressively confronting those doubts, the second EP of the series, I am WHO, opts for a contemplative approach. In “Question”, they sing:

I don’t know either, questions about me
Every day, every night, they repeat
My thoughts and behaviors
Are they all me?
There are no answers but I’ve got so many questions

In the single “My Pace”, they wisely advise on the importance of not comparing your path to another’s:

Going ahead doesn’t mean you’re going to get there first, baby
Look at it from afar, take your time
There’s no need to rush, my pace
Don’t compare yourself with others
It’s okay to run slower

While uncertainties will always be a part of life, Stray Kids learn that it is okay not to have all the answers. On the concluding EP of this series, I am YOU, a hopeful outlook emerges: one can say they finally found out who they are. Bearing multiple meanings, the “you” of the title can either be their fandom, a significant other, or their own selves. In the eponymous title track, Hyunjin explains that “you reflected myself I didn’t know, I was wondering alone because I didn’t know myself”, and in the chorus, they all sing:

I am you, I see me in you
I know when I’m with you
In the same place, in the same time
I can overcome anything

This newfound confidence is a testament to their natural growth, but also to their effort in analyzing feelings rather than running away from them. They know that there is a time for kicking and screaming, and a time for accepting change. It is that meticulous, magnifying-glass method that renders Stray Kids as more than just idols, but as insightful and relatable individuals.

Narratives with a beginning, middle, and end are a comforting refuge, but real life is not as simple. Stray Kids know that, as the end of the I am… trilogy is the beginning of their second EP series, Clé. In Clé 1 : Miroh, they display a boastful self-esteem, but the shadows of insecurity creep even deeper. “It’s not hard, in this rough jungle / It was me who ran into it, I’m okay”, they say in the title track “Miroh”. But as the EP progresses, those feelings are replaced by a familiar darkness, such as in Changbin’s anxious verses for the astounding “Chronosaurus”:

Time won’t solve this,
I’ll get caught if I just wait, I should do something
I don’t have other solutions
Would time in this place be gold or a beast?
Would it be me or my dream that’s caught while playing tag?

Questions about identity emerge again, as well as second thoughts about their capabilities and the future. Seungmin debates whether he should just give up in “Maze of Memories”, recalling their radical attitude from the debut EP, but promptly asks himself, “but really, can I give up?” Eventually, he realizes that “no, I shouldn’t give up / I feel it inside, don’t wanna give up”.

A bittersweet feeling permeates through the tracks. There is a desire to move forward into an exciting future, but also to return to a safe, unchanging past. Clé 2 : Yellow Wood explores this dichotomy further, referring to Robert Frost’s famous poem, “The Road Not Taken” and acknowledging that taking the less traveled road (or, the path they are building from scratch as idols) ultimately makes all the difference.

Time and experience granted Stray Kids a clear outlook to their struggles, but not without a painful cost. In Yellow Wood’s chaotic single, “Side Effects”, the scars become evident:

“Maybe it hurts because I thought it would be easy,” they wonder. Yellow Wood, like I am WHO,  is about opening up possibilities while acquiescing to the gruesome process of transformation. It is about addressing fear and pain, and slowly seeing them become clues to happiness.

Those are also the hallmarks of Clé : Levanter, the final EP of the trilogy, released earlier this month. By offering an encouraging resilience rather than groundless optimism, they prove that the road is tough, but entirely rewarding. Opening track “STOP” sets the tone:

If once Stray Kids demanded clear answers and wanted to fix their broken compass, nowadays they realize the path is theirs to make. There is no right or wrong when growing up, only the chosen way ahead. With the freedom that comes from looking inside and finding the clé to your soul, single “Levanter” beautifully sums this process so far: 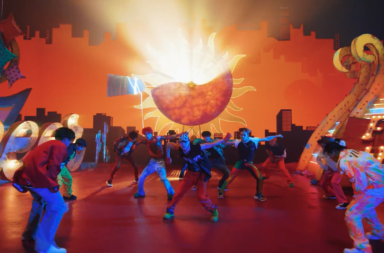