In South Korea, independent artists tend to be the silent heroes of the music industry. They work tirelessly to create art that calls to them as well as to make ends meet. Within that balancing act arises some of the most unique, most diverse sounds to come out of the country. For the End-of-Year Indie discussion this year, Cy and Qian have a varied list of artists and bands who each brought something powerful to the table. 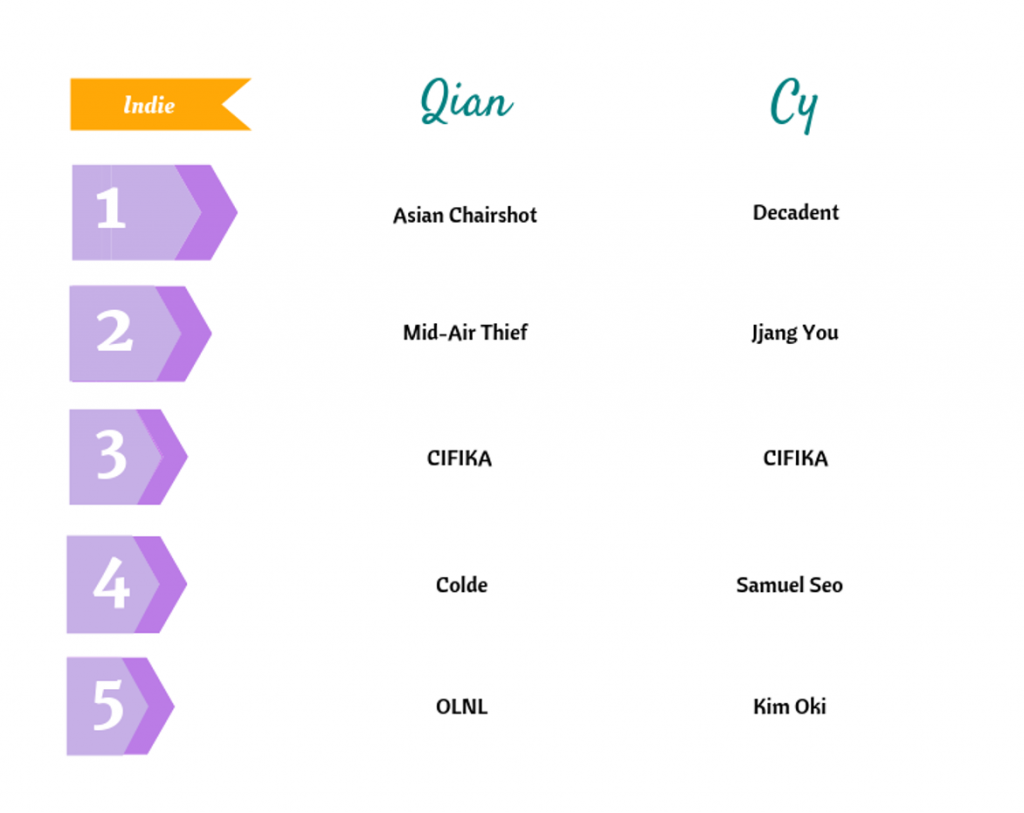 Cy: 2018 was such an incredible year for indie music in South Korea! I think while people were focused on the BTS juggernaut, it was easy for all the non-Kpop and music from smaller labels (or no labels at all) to go under the radar. So bountiful was the indie music this year, there was only one definite for me on this list, and that was my number 1. Narrowing it down to five was torture.

Qian: I wouldn’t know about “incredible,” but personally, the slower year in music has allowed for some pleasant discoveries, along with some reevaluations of some artists I’ve been inattentive towards, or in one case, had showered with excessive praise. I can see I need to venture out of my comfort zone more, because I only recognise two artists on your list.

Cy: I wouldn’t say this year was slower. Given how much music actually came out this year, I don’t think that’s an accurate description. I think it’s more a matter of where your attention lies and what you’re more interested in listening to. But let’s start with who have in common. What was it about CIFIKA’s work this year that drew your attention?

Qian: Fresh, exciting, and atmospheric, CIFIKA’s polished blend of electronica and synth pop is complemented beautifully by her warm voice. What sets her apart from other electronic artists is the clear sense of direction and progression her music takes. I liked PRISM, but it wasn’t until I heard some of her other features and production work this year — such as Crush’s “Ryo” — that I was sure she was someone to look out for in the coming years.

Cy: I’ve been in love with CIFIKA for a little while now. My adoration of her brand of electronica was boosted when I got to see her at SXSW this year. Of course the audience was there for the K-pop and R&B. But when CIFIKA hit the stage and sang the first note, I mean everyone was struck silent, mesmerized. She’s just an angelic force of nature. “Ryo” was a powerhouse, and her addition to the track added some very real introspection to a song that could’ve been construed as wanton lashing out. I hear so much Bjork in her sound, and though that’s not the reason I adore her, it certainly gave me pause the first time I listened to her music. What made me actually fall in love with her is just how pure her sound is, how from the earth it is.

This is also the reason why Kim Oki made my list. He’s an experimental jazz saxophonist. I first heard of him because he collaborated with another artist I adore named Hippy Was Gipsy. His album Saturn Meditation was so expansive, so incredibly vast in its scope it took my breath away. He’s got an ability to take so much of the world around him and zero in on the most primal parts of it. Taking the molecules of a thing and zooming in on them to show the universes inherent in the smallest particles. TL; DR: Sam Oki makes truly astounding music. It is actually jazz, but he takes it past what people think of the genre into something otherworldly.

Qian: When you say “otherworldly,” I think of Mid-Air Thief. Their fusion of folk, psychedelia, and electronic music is dreamy, meandering, and deceptively unassuming. There are moments on their 2018 effort Crumbling where I was ready to dismiss it as aimless, abstract, and lost — like James Blake on a bad day — before I reached one of its many moments of brilliance, like the climax of “Gameun Deut,” or the multiple twists and turns of “Why?”, which feels like the audio equivalent of a fisherman having another edible before the first one’s kicked in. It’s definitely not for everyone, but for the patient and attentive listener, it’s an immensely rewarding experience.

Cy: I think that might be the common thread between our lists, even if who have on our lists are different: otherworldly. For me, that was unequivocally Decadent. They’re a band that fuses neo-blues, rock, soul, funk, R&B… just everything connected to the roots of music. Their music is lush, powerful, undeniably gorgeous. Their lead guitarist and songwriter, Pahk Chang, has a mind for music and music history that’s just earth-shattering. He creates music that’s poignant, endearing, and most of all honest. The entire band is incredibly gifted. But Dennis Jin’s voice is…. it’s a masterpiece.

Decadent’s self-titled LP was a culmination of all the things that made them such a force when they debuted in 2016 with their powerhouse blues ballad “A.” The entire Decadent album was sheer brilliance, combing through everything musically that makes them what they are. Since they make an appearance on all the lists I’m on, it’s obvious they’ve shaken me to my core.

Qian: And although they released their album rather early into this year, I’m still reeling from Asian Chairshot’s IGNITE myself. The band — appropriately named after an illegal wrestling move — fuses psychedelic and garage rock masterfully, with traditional Korean instruments thrown into the mix.

Though I had put it slightly behind Naul’s Sound Doctrine in my Mid-Year Review, it’s grown on me immeasurably to take the top spot on my list today, as each time I revisit IGNITE I find something new to appreciate. It’s euphoric, it’s wild, it sounds like a chair thrown at the back of the head. And even though Hyukoh didn’t live up to my expectations this year, I couldn’t have asked for a better substitute. It’s amazing.

Speaking of unmet expectations, I was prepared to put Colde higher on my list, but I was not as enthralled by his EP Wave as his features — like on “Rain Bird” and “It Takes Time” — and works with fellow OffonOff producer 0Channel. Amongst the sea of lo-fi offerings, Colde still stands out though: he’s able to find the pocket of the music he’s on with little effort, his relaxed voice puts people at ease, and it’s clear he’s an artist that will soon settle comfortably into the mainstream with fellow Club Eskimo artist DEAN. I just hope he re-ups with 0Channel soon; the detailed, moody and woozy production he provides is where Colde shines the most.

Cy: I have a soft spot in my heart for all the members of Club Eskimo. That collective is just filled to the brim with talent. Though none of them ultimately made my EOY indie list, I do have great love for them.

As far as hip-hop goes this year, in some ways it was somewhat lackluster. But I think that’s what happens when a genre just has an onslaught of artists doing the same thing. The percentages just work out that a lot of artists don’t live up to their potential. However, when it comes to artists who really push themselves while staying true to the genre, there’s nobody like Jjang You for me. I’ve loved him since I first heard his group ILLAP, then again with his latest group collective WAVISABIROOM. But his album KOKI7 was just vicious. He has a ferocious style of delivery that gives me Kendrick Lamar vibes, just in terms of having something on his chest he has to beat out. To be honest, every time he releases something, I take notice. He’s absolutely my favorite male rapper coming out of Korea, without breaking a sweat.

Qian: Amongst the onslaught of new hip-hop artists, I’ve gained a newfound appreciation for OLNL over the past few months. While I immediately loved “Foreign Student,” with its —deliberately? — terrible whistling and the feelings of helplessness and alienation it detailed, the rest of his debut album All Available took some time getting used to. As a rapper, his greatest strength is his boundless charm and quirkiness, with a voice deeper than Block B’s P.O. yet capable of surprising with his range. However, All Available was definitely unpolished and messy in some areas, and a little off-putting for the uninitiated.

I was ready to throw him in the pile, until his turn on Show Me The Money 777 once again put him the spotlight with some well-produced singles like “Breaking Bad.” Not only that, his newest EP, staff ONLY, showed a marked improvement from his earlier efforts. With his continued improvement, continued partnership with Giriboy and some more well-placed features — like with jiminxjamie this year — I can see OLNL easily breaking into the mainstream in the near future.

Besides Giriboy, however, OLNL does frequently collaborate with the final member on your list, Samuel Seo, sharing collaborations like “I” and “Sweet.” What was it about Samuel that caught your eye?

Cy: It was his album UNITY. Samuel Seo is an artist who consistently makes good music. I don’t believe there’s been an artist that I’ve come across in South Korea (yet) that continues to push their musical boundaries and with significant success, at least in terms of the care taken to the sonic landscape. It’s an album that makes use of live studio musicians, a recording that’s closer to a jazz release than anything else. However, there’s so much nuance in the way he approaches the album, so much scope in his musical understanding and execution.

Honestly, he’s one of the most underappreciated artists to come out of South Korea as far as I’m concerned. Music is more than just a medium to him, more than just a means to an end. It’s obvious in the way he approaches his creative process (and the subsequent result) that music is his language.

I can honestly say this year was a stellar one for music coming out of South Korea if you dared to look outside the norm. Indie affords us the opportunity to venture beyond what’s easily recognizable or even more heavily promoted. There’s so much music that goes unnoticed in the country itself, it’s easy to overlook some of the brilliance it has to offer musically. My hope is that in 2019 these artists get more support, grow in their own musical scope, and that we see more artists take the dive.