SB Mid-Year Review, 2018: The Movers and Breakers of Indie

Seoulbeats has always strived to give K-indie artists and their music more exposure among K-pop fans and beyond. It is in this spirit that our mid-year and end-of-year reviews also feature discussions on our favourite indie artists. This year, Karen, Gaya, and Camiele (Cy) come together to discuss the indie artists that have made an early impression on them. 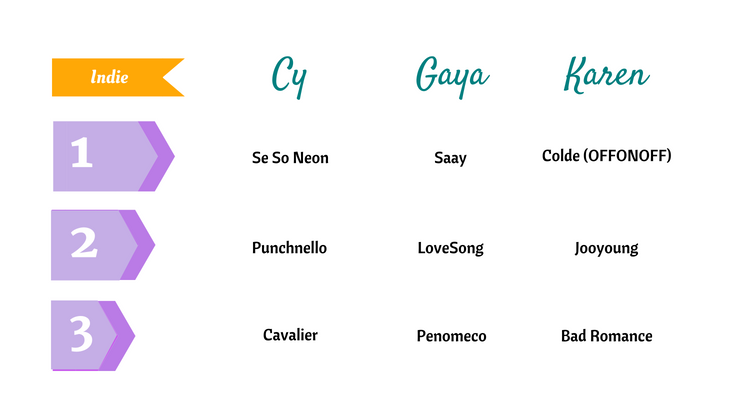 Gaya: Loving how different all our lists are! I’m currently going through all the artists on everyone else’s lists — got any recs for me? Was there any particular song that made you decide “yes they must be on my list” or was there more to it?

Also, Cavalier’s “Bacteria” is so… fartastic.

Karen: Indie is such a broad genre that it’s always fascinating to see how diverse these lists turn out to be. First things first, I totally considered putting Penomeco on my list, especially since I’m a huge fan of his works, but he was outshone by Colde and Jooyoung in the first half of 2018. Personally, I felt his more spectacular works happened last year. As for Colde and Jooyoung, I decided to put them in almost entirely because of their performances of Breakers. Penomeco did win, but those two really felt like gems to me when I watched them.

Cy: At first my list was ten deep. On that list, I had both Jooyoung and Saay. Saay is my queen! I adore everything about her from her voice to her swag. She’s just fabulous in so many ways. Jooyoung’s Fountain was a masterful release after so long waiting for him to produce more work. However, within R&B, the genre both Saay and Jooyoung represent, there were people who pushed so much further for me than either one of them: Cavalier and Punchnello.

Cavalier took me back to artists like Vikter Duplaix and even Flying Lotus, to a lesser extent. Innate had such a pulse to it, something that was somewhat darker around the edges but was also ethereal and a little divine. It was more than just the collab with Crush, which many would point out simply because Crush is there. The entire piece of work touched me on a molecular level.

Though Punchnello is more known for hip-hop, he pushed the envelope with at 5:43am. There was so much emotion, so much heartache in the piece which was sparse on lyricism and completely a means for him to stretch his compositional skills.

Karen: Punchnello’s at 5:43am was a pleasant surprise. I did not except that form of emotional depth to be incorporated into his tunes. at 5:43am is such an apt title for the vibes of his tracks. This particular set of songs differed so much from the style he put out when I watched him on Show Me The Money 6.

Cy: While I do adore both Colde and Penomeco (can we just acknowledge how thick clube$kimo is with the talent? Damn?!), musically there were a few artists who took their work further for me than they did. I didn’t get a chance to watch Breakers, but I doubt their appearances on the show would’ve changed my mind about the work they released this year.

Gaya: I think my list shows my relative inexperience with the indie scene in general, and your responses have really got me thinking of why and how I chose the artists I chose. My basic process was to just go with the artists whose music spoke to me, and then also consider their activity during the year.

Karen: Music that speaks to you is one of the reasons why we listen to artists we like, and I don’t think you should discount that! Colde, Jooyoung, and Bad Romance were my top picks because their music stood out to me amongst so many others. Even while we are putting this together, I am still impressed by Colde’s featuring, together with Tablo, on Code Kunst’s newest track “rain bird.” Many people have also pointed out to me regarding his collaboration song with Crush on Breakers, “Your Dog Loves You,” as a noteworthy tune.

Jooyoung caught my eye, arguably because I was less familiar with him as an artist before I saw him on Breakers. His first performance, “Where We Are,” really drew attention to his vocals. I went to look up Fountain and fell in love with “Wine,” a song featuring G.Soul. The honey vocals of both artists were hard to resist. Jooyoung’s music is a great balance between melancholy and groovier beats. As Cy mentions, Fountain was indeed a release that makes listeners anticipating Jooyoung’s future works.

As for Bad Romance, I started noticing them when I attended one of their impromptu live performances in South Korea last year. They were in the midst of preparing for their new releases early this year when I watched them in December. “Wait For Spring” is a beautiful track that came out just in time to welcome Spring, while “I’ll Love Her” spotlights the group’s soothing vocals. It’s such a pity they don’t get as much attention outside of South Korea as they do most of their performances in the live bars around Hongdae. The woes of not physically being in South Korea!

Gaya: Sorry, I didn’t mean to sound put out or anything, it just reminded me of how much there is to learn about K-indie and while it is daunting, the main reason I sign up for these indie roundtables is to force myself to get out there and listen to more music and learn, and I hope any other indie newbies reading this also discover something.

Just about everyone on the Seoulbeats team has heard me gush about Penomeco’s “L.I.E”, but I will say that he has a nasal tone that I am so partial to and his higher register really hits the spot for me. And then I listen to his low notes in “Good Morning” and… it just isn’t fair. How dare he. I will admit that I do feel guilty for discovering him so late, and only after people started expressing their curiosity at him releasing MVs on SM’s YouTube channel. It makes me think about the idea of exposure and its position as a measure of success, but I am nevertheless glad that he has had the chance to introduce himself to more potential fans.

Saay is another person I think about in terms of exposure, albeit in a different context. As a former idol, she already has enough of a profile to create a slightly larger area of intersection in the K-pop/K-indie Venn diagram, even outside of EvoL fans. As a non-fan however, I was so pleasantly taken aback by her debut solo LP, CLAASSIC. Though my preference is for electronica, I couldn’t be upset with how the R&B took over when Saay sounds so divine on tracks like “Circle”, “Love Drop”, “Fallin’”, and “Stay“ that I can’t be mad. Besides, I still get my fix with “Jaam” and “Cold View”. Punchnello is also a standout on “Rainbow Car”, cleansing the palate after a sadly dissonant chorus (this and the lyrics for interlude “Time, Energy & Love” are my only qualms with the album).

Co-producing with Deez, Saay’s artistry reminds me yet again of how, until recently, I never gave much thought to the idea of female idols capably producing music. It’s embarrassingly easy to buy into the idea that these girls and women are chosen mainly for their looks and thus dismiss any other inclinations and ambitions they may have. It’s as if we are saying “you have looks, what else do does a female idol need?” and that is so unfair. I am so glad that Saay, Soma, Subin and a whole host of other former, present and future lady idols continue to quietly point out this prejudice I have and help me root it out.

LoveSong is another such woman whose name is all over the credits for her music. “Bloom” succeeds where “Rainbow Car” fails by keeping it simple, and gives me the ratio of electronica to R&B that leaves me asking for more. Of the other 2018 singles released so far, “Kki” follows the same formula, while “Spring” strips down to give you a better feel for LoveSong’s vocals. She sounds so sweet that I almost barely notice the usual indie accent — I cannot wait for her next album, and to add her to my next “All Woman” playlist.

Cy: When it comes to indie releases, you have to prepare yourself to encounter things that you won’t when it comes to the mainstream. It’s been a solid five years since my first encounter with the indie scene in Korea, and every year artists always surprise me with their nuance, their ability to push the boundaries with not just their own music, but the understanding of Korean music in general. I’m never exactly surprised that I find more to latch on to with artists from indie labels. I’m more surprised at how much I miss. Se So Neon, for example, came to me by way of Dean (lead vocalist and guitarist Hwang So-yoon was the guitarist on his single “Instagram”), and I’ve never been more in love with a woman’s voice than I am with So-yoon’s.

The risks these artists and bands take, they’re afforded that right because they’re unbeholden to what the general public deems proper. Instead of creating pseudo-sub genres that are radio and pop-friendly, they delve into the heart of these genres (R&B, hip-hop, blues-rock, etc.) and come up with something meatier, earthier, and more profound. Leaving their respective genres more nuanced than when they found them. 2018 was just a damn good year for independent artists.

Readers, which K-indie artists have impressed you these last six months? Have you made any new discoveries? Let us know in the comments below!