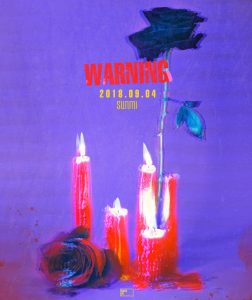 Following the unfortunate disbandment of long-reigning group Wonder Girls, former member Sunmi took the chance to return to the stage once again as a solo act. After a triumphant comeback with two hit records to her name, Sunmi has finally released her much anticipated second EP properly titled Warning. Although labeled as a mini album, Warning packs plenty of powerful emotions heightened by striking instrumentations that have this album contending for the best of the year.

Warning is opened with the fierce English intro “Addict” that has Sunmi asking listeners “Whose running the show?” Its powerful baseline and use of a heavy synth pattern mark “Addict” as a dramatic entry into the mind of Sunmi in which she declares confidently to be running the spectacle all herself. Although the track is used as an intro coming in under two minutes, the song title is a clear warning sign that foreshadows the emotional ride and the constant power struggle of the rest of the EP. Sunmi demands undivided attention that will eventually transform into an addiction the listeners conjure towards her. Although the attention may come at a price, Sunmi interjects that she herself holds a strong addiction to the stage and therefore can never see herself letting it go, so she sees fit to make it all her own.

The title track of the EP, “Siren” is a vibrant pop song with an 80’s inspired instrumentation that pushes the song towards a retro ambient sound. The chorus is high and catchy as Sunmi conveys feelings of anger pleading her lover to “Get away out of my face, don’t come closer.” “Siren” pleasantly switches tones towards the end as Sunmi rap/sings her verse while the instrumentation is dredged with trap hi-hats while simultaneously dropping in tone. The music video for “Siren” shows Sunmi facing off against her alter ego in a space that pushes the boundaries of reality and fiction. The choreography is both elegant and dominant falling in line perfectly with the lyrical message of the song.

Just let go, Don’t even hesitate
Just let go of me, I’m going to hurt you
You know that in your fantasy, I’m not beautiful
Can’t you see that? 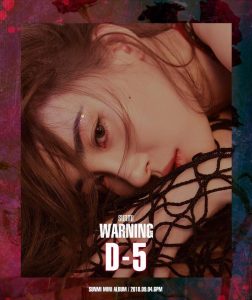 Lyrically, “Siren” addresses a rocky relationship one hinge away from ending. Throughout the song’s progression, Sunmi warns that inevitably she will break hearts so it is better to leave her now before unforgivable heartache begins. As her warning to her lover goes unheard, she turns towards anger in the chorus melody, belting out her frustration and annoyance that her repeated caution signs are being ignored.

The title track is sonically resemblant of her hit “Gashina” which is included within Warning. Although stylistically on par with one another, the difference in message is important to the overall significance of the EP. In “Siren” Sunmi convinces herself that she is a distorted and unbeautiful image in her lover’s fantasy yet in “Gashina” she paints herself as a blooming flower chased by many in hope of coming close to her scent.

The difference in how Sunmi choices to view herself goes fondly with the saying “The beauty is in the eye of the beholder.” In each instance, the way Sunmi perceives herself tends to change both dramatically and drastically. She wears her emotions on her sleeve as evident in the music videos where her expressions, wardrobe, and mannerisms tend to change without warning. Even in the breakup anthem “Heroine,” Sunmi struggles with her hyperactive fluctuation of emotions that seem to change with each breath. “Heroine” showcases her extravagant chaoticness with the sound of electronic tropical beats while she reverses her role in “Siren” and this time braces herself for heartbreak. 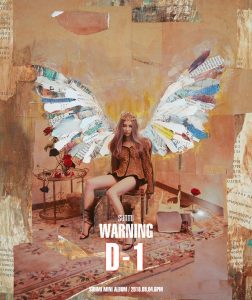 With the more uptempo songs mirroring her animated personality and wide spectrum of emotions, the track “Curve” creates a change in wind with a chill and mid-tempo instrumentation. “Curve” serves up plenty of self-confidence for Sunmi. Even as she wavers repeatedly in her feelings towards herself, the one key factor that stays the same within Warning is her unwavering confidence, even in the face of uncertainty for her future.

The warm piano melody combined with Sunmi’s calmer vocal tones illustrates the tranquil feeling one must try to possess in looking towards what’s ahead. Sunmi conveys her beliefs through the lyrics which warns for careful treading as one tries to navigate life’s unpredictableness. Sunmi parades this sentiment further with the track “Black Pearl” which takes on a city pop vibe using a smoothing saxophone and a sexy bass guitar riff. “Black Pearl” details the life of fame in which Sunmi feels solely like a “pretty” product for consumption. The opening lines of the song seem to correlate with “Curve” in that she confesses to taking her own advice in enduring the bittersweet lifestyle she sought after. 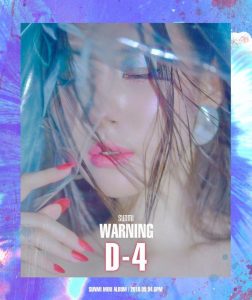 In nature, a black pearl has long been more expensive and sought after than its white counterpart due in part to the extremely rare conditions it takes to form their dark iridescent glow. In this context, it is easy to see why Sunmi views herself this way. The dark emotions that come with fame, the public criticism and the distance from normalcy take its toll on the human psyche and can impact a person’s self-esteem and how they see their value within the world. For Sunmi, although she repeatedly interjects a confident and strong aura she is not afraid to show vulnerability and her insecurities as a person, a lover and a human being.

This is most prevalent in the outro of the EP, “Secret Tape.” Said to be about Red Velvet member Seulgi, the track carries a dreamy almost whimsical instrumentation with a mellow rock vibe chorus adding to Sunmi’s soft vocal performance. The song is short and sweet, detailing a friendship that is kept alive by the memories and secrets that are shared only between two people. It’s quite meaningful that Sunmi chose to close her EP with a track not relating to romantic relationships or the drama of fame. Concluding her EP with “Secret Tape” brings Warning to a satisfying conclusion from a journey of failed relationships and the anxiety of life under the public eye. It seems right that Sunmi ends in a place of comfort and love rather than turmoil.

All in all, Sunmi’s second mini album, Warning is an artistic stride for the solo singer that will establish her dominance as one of the top female solo performers in K-pop. With Sunmi taking writing credits in all the EP’s tracks, it’s no wonder how her own personality is able to shine through so exquisitely. Each song has a message to boot with a sonically impressive sound that pulls no punches. This is quite a grand return for Sunmi one that won’t be forgotten so easily, if at all.