Sunmi Declares the Show Must Go on in "Heroine" 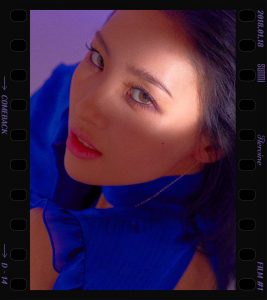 Since Sunmi‘s lavish and seductive grand return with “Gashina” under her new agency, AroundUs Entertainment, she has proven that she has the talent and boldness to create longevity with her career. In “Gashina,” Sunmi showed her impeccable style and an extravagant chaoticness that made the song a hit with its dynamic choreography and quirky aesthetics.

Not long after the song’s massive success, Sunmi has returned with her most brazen and creative song to date, “Heroine.” Although the song is currently in the middle of a plagiarism debate with Cheryl Cole‘s 2009 track “Fight For Love”, producer Teddy has claimed that no plagiarism has been made as “Heroine” is 100% his own original creation alongside producer 24. Although the comparison of the two songs may be fair, it’s unfortunate that Sunmi has to take most of the heat considering she was only involved in the writing of lyrics for her song.

In spite of the controversy looming overhead, Sunmi’s “Heroine” is a track that cannot be easily ignored with its tropical house influences and electronic blaring beats. The song serves as a prequel to the cynical breakup track “Gashina” as it deals with the protagonist’s feelings toward her current relationship which is quickly turning turbulent and overbearing. The lyrical sentiment of “the show must go in” is the song’s tagline as it expresses a withstanding spirit to constantly move forward without knowing what’s ahead despite life’s setbacks trying to keep one nailed down.

Throughout the song’s narrative, Sunmi is in a state of induced happiness despite being filled with angst as she proclaims to her lover the need for him to be himself regardless of the effect it has on her and the unhappy emotions it conjures within her. Sunmi bravely sings,

Sunmi ultimately is setting herself up for a crushing heartbreak as she doesn’t ask her lover to change or alter his hurtful demeanor for her pleasure. Instead she comes to a realization that he should go on being himself and because of this, their story is already destined for a sad ending. The vibrant and colorful backdrops and the fast paced wardrobe changes within the MV perfectly parallel Sunmi’s state of mind as she deals with her unpredictable relationship. Her bold yet vulnerable glances to the camera and her exaggerated but free body movements are shadowed by the synth atmospheric melody and the amorous intensity of the instrumental chorus that is undoubtedly the heart of the song and the MV.

The push and pull dance sequence with her partner throughout the visual for “Heroine” dramatizes a fight between a couple in which one side cannot decide if the struggle is worth the end result. For Sunmi, her external struggle with her partner plays like a movie, hence the stage designs and curtain calls throughout the video. Yet despite their constant fighting, Sunmi is not afraid of calling her vicious lover a hero as she sings,

In this movie of ours
You’re the true hero baby
Again today, you’re so you
Like the glamorous star you are 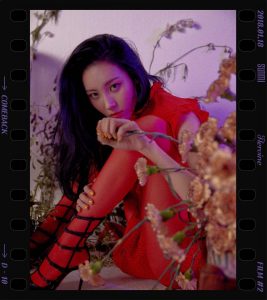 Putting her own troubled feelings aside, Sunmi cannot help but feel enamored by her lover as he chooses being himself despite what others want him to conform into. In their love story, Sunmi levels her lover as a hero but she herself is platformed into a heroine because she decides to prevail over her missteps and boldly declares that her show must still go on, with or without her significant other.

In the final sequence of the video, she faces off with herself on a billboard with the song’s tagline stated boldly and vividly. True to her personality, Sunmi shoots down the billboard sign and fearlessly walks away toward her own path, this time comfortably alone.

Sunmi’s comeback with “Heroine” is a beautifully crafted MV with a strong lyrical message to follow. Sunmi has yet again proved her talent as an entertainer and as a unique performer. There is no doubt that her extravagant show will go on and turn into a long successful career. “Heroine” was just released but already I am anticipating Sunmi’s full length album where listeners can get to experience what kind of surprises the heroine has yet to reveal.