Twice's "What Is Love?" Fails to Impress 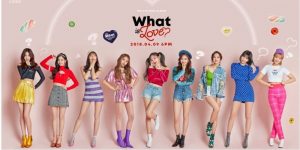 What do Quentin Tarantino, Baz Luhrmann, and Shunji Iwai all have in common? Apart from being legendary artists whose influence will be felt for decades to come, they’re all referenced in the new Twice MV, “What Is Love?”. And as much as it pains me to say it, “What Is Love?”  marks the moment where Twice has hit that most feared of all concepts: diminishing returns.

Twice’s penchent for cosplay in “Cheer Up” and “TT” was an exceedingly clever move on JYP Entertainment’s part. It gave them a unique image in a time of large girl groups, and even if the costumes didn’t add anything to the MVs, playing “spot the film” was pretty fun. Moreover, they didn’t run the cosplay concept into the ground, instead moving on before the public got sick of it. Yet, the movies make a return in “What Is Love?” and ironically prove why they didn’t stick with it before.

In every way, “What Is Love?” is a “Cheer Up” clone. It’s a bubbly, loud and generic pop song paired with an MV packed with shout-outs to well-known films or film-like things. However, “Cheer Up” had the advantage of being new. In “What Is Love?”, the same set-up feels lazy and poorly planned, because if they were going to repeat a concept so exactly, they should have improved on it. Now, it’s been there, done that, with the movie identification feeling like something you have do or it’ll but you all day rather than a fun game.

The framing device is relatively clever: the members of Twice are having a sleepover, and keep imagining themselves in the movies. This had the potential to pick up on and enhance the song. After all, “What Is Love?” is about Twice wondering what love is. For all that they’ve seen it in movies, dramas, and books, they’ve never been in love. It’s this tantalizing thing that Twice see with wide-eyed wonder; untouched by the cynicism of heartbreak. It’s all flowers and fairytales, no “baby, don’t hurt me no more” driving you spoon-first into the Ben & Jerry’s. 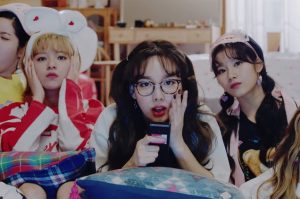 And for a while , it looks like the MV is going to have some fun pitting those ideals of love against icons of love. Most great love stories don’t have happy endings, after all. Ghost, La La Land, and Baz Luhrmann’s Romeo + Juliet are great examples of that split, and provide a layer of humor as Twice blissfully insert themselves into the happy bits. You can just hear them creating a new ending where Romeo and Juliet end the feud and live happily ever after.

However, it starts to fall apart as the film references go one. La Boum is a comedy while Pulp Fiction is not a love story, happy or otherwise. The Princess Diaries are more about Mia as a person than her relationship with Michael, and I don’t care what the international cut of The Professional says, I’m giving a firm ‘no’ to the romanization of a 12 year-old’s emotional trauma. Poor Dahyun gets the absolute short end of the stick; she’s referencing her own contact lense CF.

The whole MV comes off as if they got halfway through, before deciding that coming up with 9 with tragic love stories was too hard, so they went with whatever. Even when going with a broader theme of “90s classics”, it falls apart– La La Land, and again, poor Dahyun. The homages themselves come off as shallow, as if no one saw any part of these movies but the relevant YouTube clips, Nayeon in particular. The makeover made Mia feel more self-conscious, not less. 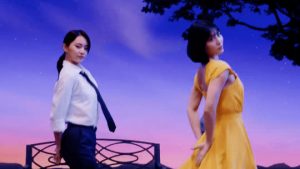 All of this ties back into those dreaded two words, ‘diminishing returns’. Twice might still sell like gangbusters, but “Cheer Up” was their commercial peak, followed by a slow sales decent that turned into a sales plummet with “Likey”. Sure, Twicestagram  had some of their highest album sales to date, but it wasn’t enough to compensate for the 42% decrease in singles sales. Yes, that did leave them at roughly 695,000 singles sold, but considering all their other singles cleared a million, that’s a large drop. Clearly, JYP panicked and returned them to their highest selling concept, but “What Is Love?” feels like the carbon copy that it is, and alienates more than it appeals.

On the whole, “What Is Love?” comes off a rushed, bland, overly safe production in which Twice manages to poorly copy themselves. It’s a real letdown, and I can only hope they shift directions again soon.